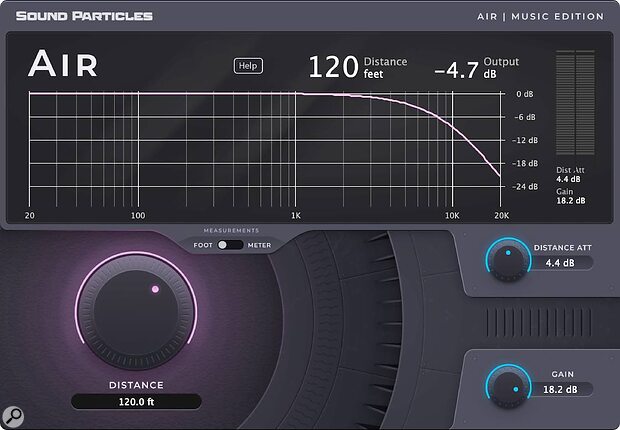 Sound Particles have announced the release of Air | Music Edition, a free plug-in which simulates the acoustic effect of increasing the distance between the listener and sound source.

The plug-in features a new, modern GUI design, with just three controls offering simple and intuitive operation. Users are able to set the virtual distance they wish to place their sound source at via a large Distance control, which offers its measurements in both feet and metres. A graph displays the frequency response being applied, and level optimisation can be carried out via Gain and Distance Attenuation controls.

Sound Particles recommend using Air | Music Edition to add clear and natural-sounding depth to close-miked recordings. The company also say that air dampening frequency response measurements have been used during development, and as such the plug-in provides more accurate results than using a simple low-pass filter.

Air | Music Edition is supported on PCs running Windows 10 or higher, and Macs running macOS 10.13 or higher. Both Intel and Apple Silicon processors are natively supported. The plug-in is available in VST3, AU, and AAX Native formats. Minimum requirements are a two-core processor and 4GB of RAM, with Sound Particles recommending a four-core processor and 8GB of RAM. 300MB of disk space is required.