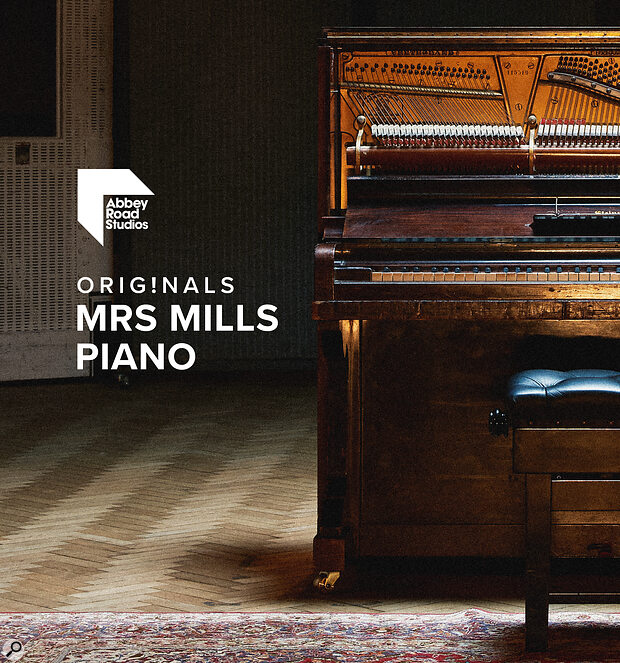 Spitfire Audio's Originals series of highly focused software instruments has featured some unusual sounds in the past, and tends to favour specific composer niches. Its latest member, however, spotlights perhaps the most famous piano in popular music: Abbey Road's 1905 Steinway Vertegrand, heard on such obscure tracks as 'Penny Lane' and 'With A Little Help From My Friends', and affectionately known as the 'Mrs Mills piano' by the studio's engineers, after legendary pianist Gladys Mills, whose many popular music-hall records were recorded on it.

Created in the Beatles' old haunt of Studio Two, Originals: Mrs Mills Piano was captured with Spitfire's typical attention to detail, and using some of the finest gear at Abbey Road's disposal. Mic positions include 'Close' (a stereo pair of Neumann U67s), 'Room' (a spaced omni array), and 'Vintage': the classic Abbey Road sound of a single AKG D19 (aka 'the Beatles mic') suspended above the centre of the strings, recorded through a REDD.47 preamp and onto a Studer J37 valve tape machine. In addition to the choice of microphone and mic positions, the new library includes six effects (among them Abbey Road's own EMT plate reverb), and a number of tone-shaping controls.

The piano itself, Spitfire tell us, has been at Abbey Road since 1931, and owes its distinctive sound to a number of modifications commissioned by 1950s engineer Stuart Eltham. The hammers were apparently hardened with lacquer to emulate the bright, sharp tone of a tack piano, and specific strings were carefully detuned to create the classic 'honky-tonk in a saloon' sound heard on so many hit records.

But perhaps the best thing about Originals: Mrs Mills Piano, however, is the price: just £29. Like the other Originals libraries, it sports a clean, decluttered interface and is fully NKS compatible. Check out Spitfire's launch video below to find out more.