TapeWrm Audio: classic effects with a dash of distortion Skip to main content

TapeWrm Audio: classic effects with a dash of distortion 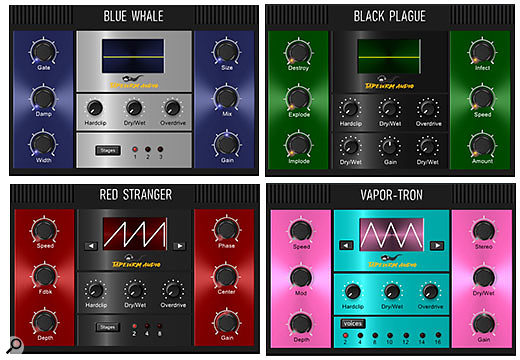 It’s not often that a new software company launches with a full suite of plug-ins — and even rarer for such a company to be run by a 13-year-old, but that’s exactly what has happened in the case of Portland, ME-based start-up TapeWrm Audio.

Of his new venture, company founder and creative director Daniel Giulianti (known musically as Kill The Kitty) says: “We wanted to throw out the old model of hardware imitations and create something totally new and different” — a fitting ethos given that most of the hardware that modern plug-ins emulate was made long before he was born.

Accordingly, none of TapeWrm’s four debut plug-ins look like quite like anything else (though their UIs share a common layout). And rather than offering analogue-style smoothness, warmth or saturation, they all sit firmly at the ‘mangling’ end of the processing spectrum.

Black Plague ($34.99), for example, is a distortion and bit-crushing plug-in, which includes a low-pass filter to recreate the generation loss you get from resampling, as well as a flanger effect.

Next up is Red Stranger ($24.99), described by TapeWrm as their “satanic version of a phaser”. As well as the usual rate and depth controls, you can select between 2, 4 or 8 stages of phasing, and even choose from a range of LFO waveforms. Living up to its “satanic” description, it also includes multiple stages of distortion and hard-clipping.

Vapor Tron ($24.99), meanwhile, applies TapeWrm’s penchant for the extreme to the humble chorus effect. Like Red Stranger, you can adjust the LFO waveform, rate and depth, only here you can apply up to 16 additional chorus voices. Naturally, an overdrive/hard-clipping effect is also present.

Finally, Blue Whale ($24.99) is a reverb effect that yet again also incorporates distortion. As well as the usual size, width and damping parameters, Blue Whale features a gate, for curtailing your reverb tails. Up to three distortion stages can be invoked, allowing you to achieve anything from smooth echoes to, in TapeWrm’s words, “maximum hardcore goodness!”.

All four of TapeWrm’s debut plug-ins are available now, either individually or all together as part of their Producer’s Bundle. The Bundle normally costs $110, but is currently selling for the introductory price of $60.