Published 3/12/15
Plug-in flexibility with the sound of real analogue hardware? 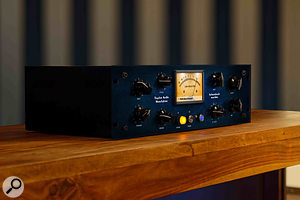 No sooner had we finished reviewing their Vari Tube Recording Channel, Berlin-based Tegeler Audio Manufaktur announced an even more ambitious product:  the ‘Schwerkraftmaschine’, which translates as ‘Gravity Machine’. The new device is, at its heart, a vari-mu compressor using a completely analogue stereo signal path — the very same that was employed in the now discontinued Vari Tube Compressor which used 4 tubes and 6 transformers. What sets this apart, though, is that it’s plug-in controlled — so fully automatable — and it even has motorised pots for perfect recall. To our knowledge, this is the first piece of high-end tube gear that has this functionality, so it’s really rather exciting.

What’s more, DSP generates the control signal for the compressor, making it possible to simulate the behaviours of all existing compressors. Want to set the compressor to act like an opto compressor, even with the memory effect? According to Tegeler, it’s as easy as pie!

The idea, sonically, is not to emulate analogue behaviour, but rather to create compression programmes that cannot usually be implemented using analogue equipment without enormous effort.

Other notable features include a side-chain filter in the lowcut mode which is infinitely adjustable from 0 - 300 Hz, and also a tilt EQ to optimally adjust the compression to the specific audio material. Naturally, there’s also a mix knob for parallel processing. A high-resolution LCD shows the programme mode and degree of compression.

All controllers are fitted with servomotors and can easily be adjusted via the network using a DAW plug-in (VST, AU, AXX) or the built-in web server. This allows the user to store the Schwerkraftmachine’s settings for each song. It is even possible to automate individual parameters in the mix.

As you’d expect, the Schwerkraftmachine is fully operable from the front panel and, if their other products are anything to go by, it should be very solidly built.

Also, stay tuned for our review of the Vari Tube Recording Channel in the January 2016 issue.