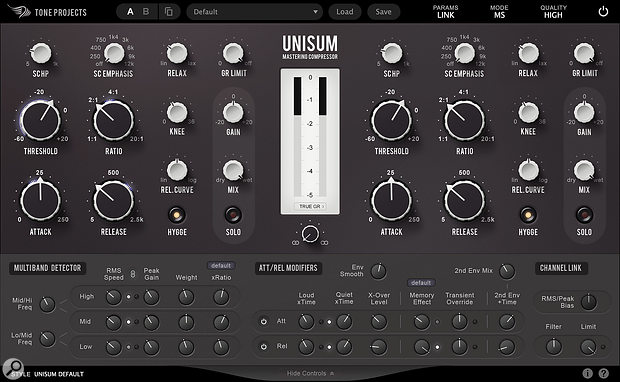 Danish software boffins Tone Projects are vying for a spot at the end of your signal chain, with a new mastering plug-in that they describe as “transparent, beautiful and ultra-flexible”.

Beauty is in the eye of the beholder, but Unisum certainly looks the part, and claims of flexibility appear to be borne out by the generous set of controls. In addition to the usual threshold, ratio, attack and release parameters, Unisum employs a unique multi-band detection section, in which you can tell the compressor to be more or less sensitive to user-definable upper and lower frequency bands, set either peak or RMS detection for each band, and even adjust each band's RMS integration time, should you feel the need.

But wait, there's more (a shopping channel presenter might say). Unisum also offers extensive control over the attack and release curves; a 'transient override' control, which lets you treat brief peaks differently to longer-term dynamic events; and a gain-reduction limiter, which prevents the compressor applying more than a set amount of attenuation. There's also a set of sidechain controls, which allow you to filter out the low end from the detection circuit to prevent bass triggering undue compression, and to apply some pre-emphasis to the sidechain, for example if you need to tame a sibilant mix.

Stereo linking controls are equally comprehensive: you can use the compressor in fully linked mode, in which compression is applied equally to the left and right channels; in dual-mono mode, in which the left and right channels are triggered independently (causing either stereo image instability or 'mojo', depending on your point of view); or anywhere in between, courtesy of a variable stereo linking knob. The left/right controls can also either be linked, or set independently of one another.

There's a wet/dry mix knob (of course), and a toggle switch marked 'hygge'. This intriguing word, closely related to the Dutch gezellig, has no direct translation in English, but its meaning is probably best described as a combination of 'cosy', 'snuggly' and 'homely'. From that, you might infer that it adds warmth, and you'd be right: Tone Projects tell us that it adds the thickness associated with tubes and transformers, for those occasions when you want to add a little analogue-style coloration.

And as if that wasn't enough to get lost in, you can also set the meters to display the input and gain reduction with your choice of true-peak, PPM or VU ballistics.

We've not tried it yet ourselves, but it's apparently already got some fans in high places. Notorious gear-stickler Bob Katz describes it as “the most analogue-sounding of all my compressors”, which is high praise indeed. “The measurable multi-tone intermodulation distortion even at high sample rates is very low” is perhaps a less grabby quote, but it certainly speaks of quality, and we can't wait to hear that low multi-tone intermodulation distortion for ourselves.