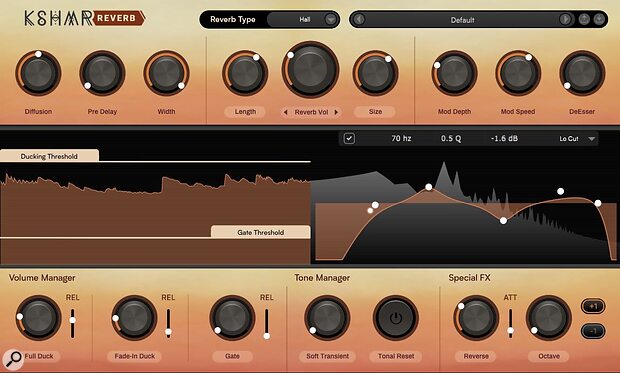 WA Production have today released KSHMR Reverb, a new reverb plug-in developed in collaboration with world-renowned DJ and producer KSHMR. Featuring a selection of tools intended to help users shape their reverb tails in interesting and creative ways, the plug-in promises to make the perfect addition to any producer’s tool kit.

Three reverb types are on offer: Hall, Plate, and Spring, and the top half of the plug-in’s GUI contains three sections which each house a set of three parameters. In the first section, a Diffusion knob offers some control over the build-up of echoes, with lower values resulting a clearer and more natural sound, whilst Pre Delay and Width controls then allow users to introduce a small delay before the start of the reverb tail and manipulate the stereo width of the effect.

The second section contains Length and Size controls, providing a means of adjusting the length of the reverb tail and the size of the virtual room, with smaller Size values producing quicker early reflections. A Mix knob then offers two modes of operation: Mix and Reverb Vol. When in Mix mode, the parameter simply acts as a balance control between the dry and wet signals, whilst Reverb Vol mode affects the volume of the wet signal whilst fixing the dry signal at 100%.

The third section then houses a pair of modulation controls that introduce some subtle movement to the reverb signal, along with a De-Esser function. A Mod Depth control sets the intensity of the fluctuations that are introduced, whilst Mod Speed controls their rate. The De-Esser knob then provides a way to reduce problematic high-frequency sounds, and is placed before the plug-in’s reverb processing.

The middle of the GUI features a six-band EQ section which allows users to shape the sound of their reverb tail, with each band represented by a dot placed on the EQ curve display. Users can select their target frequency and apply boosts or cuts by clicking and dragging the dots, whilst changes to the band’s Q can be applied either by using a mouse scroll wheel or by holding down the Alt or Option keys whilst dragging up and down.

A waveform display is also present, and features two horizontal lines that represent Ducking Threshold and Gate Threshold parameters, each of which are linked to controls in the plug-in’s lower section.

Volume Manager, Tone Manager, and Special FX sections populate the final sections, and offer a range of parameters aimed at providing creative effects. A Full Duck knob lowers the volume of the reverb whenever the plug-in’s incoming audio is louder than the Ducking Threshold, whilst a Fade-In Duck control lowers the reverb volume at the start of each new transient. Finally, a Gate parameter silences the reverb signal when its volume falls below the level defined by the Gate Threshold. All three of these controls are paired with a Release slider which defines how long it takes for the volume changes to take effect.

A Soft Transient control lowers the level of transients before they reach the reverb processing, resulting in a cleaner sounding effect, whilst a Tonal Reset button restarts the reverb each time a new transient is detected. WA Production say that this can be used to prevent pitched reverb sounds from overlapping. A Reverse knob facilitates the creation of swell effects by continually raising the volume of the reverb signal until a new transient is detected, and is paired with an Attack slider that specifies the length of the volume slope. Lastly, an Octave parameter allows an additional signal either an octave below, or an octave above, the incoming signal to be mixed with the reverb.

KSHMR Reverb is supported on PCs running Windows 8 or higher, and Macs running macOS 10.15 and above, and is supported natively on both Intel and Apple Silicon chips. It is available in AU, VST, and AAX plug-in formats.