Work with the masters with Avid's Music In Motion contest

Avid have announced that it has collaborated with Mix With The Masters to extend Music in Motion with Pro Tools | First to aspiring artists in Europe, the Middle East, India and Africa. The contest gives aspiring artists a once-in-a-lifetime opportunity to get session time with a top music industry producer, in three different categories: Songwriter, Bedroom Producer or Beat Maker. 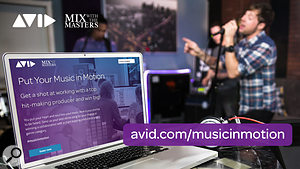 To enter, contestants need to download Pro Tools | First, the free version of the popular Pro Tools digital audio workstation and submit their demo online no later than April 30. Contestants enter their projects in the category of their choice for a chance to work with one of three chart-topping producers:

The producers will each choose a winner and make a demo of the final song through online collaboration and all-expenses-paid studio time (Songwriter and Beat Maker categories only) or an online mixing session (Bedroom Producer category only). The three winners will also receive a complete studio setup, featuring Pro Tools, Pro Tools | Quartet, Eleven MK II, and Classic Compressors Bundle. Six runners up will win a Pro Tools perpetual license and a Mix With The Masters annual online subscription.

“We created Pro Tools | First to give individuals trying to break out into the industry the same music creation capabilities used by top artists and recording studios worldwide,” said Avid Chairman, President and CEO Louis Hernandez Jr. “With this contest now extended to Europe, the Middle East, India and Africa, we’re giving aspiring artists the opportunity to work with the best of the best and potentially make their music dreams come to fruition using the free version of the industry-standard audio workstation.”