Everything you need to know about effects in Live.

Live includes a broad selection of audio effects along with myriad presets to get you started. In this workshop, we’ll show how to insert, combine and modulate effects in both Session and Arrangement views. 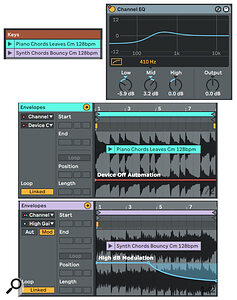 Screen 1: Channel EQ processes the synth clip only. Clip automation turns it on or off for each clip, and modulation in the synth clip affects the EQ’s High band.When you want an audio effect to process a single track, the simplest solution is to place the effect directly on that track. On an audio or instrument track, Live’s clip envelopes make it easy to apply different effect settings to different clips. For example, Screen 1 shows piano and synth loops in clip slots on the same audio track. I’ve inserted Live’s Channel EQ on that track in order to make the synth loop more compatible with the piano loop. I’ve then used clip automation to turn Channel EQ off for the piano clip and on for the synth clip, and I’ve used clip modulation to lower Channel EQ’s High band level in the last half of the synth clip. (Modulation adjusts a value relative to its current setting.) This setup will save you a track when the clips are not intended to play together. If you place the clips on separate tracks, the EQ High modulation is all that is needed.

As an alternative to Return tracks for processing several sources with the same effect, you can combine the source tracks in a Live Track Group and then place the effect on the Group track. For example, if you’ve placed Drum Racks on several tracks in order to mix and match kit‑piece patterns with separate MIDI clips, you could Group the tracks and place Live’s Drum Bus effect on the Group track to process the entire drum mix. That’s a bit more convenient than using a Return track because you don’t have to worry about suppressing the pre‑effect outputs on each of the drum tracks.

The above three methods work in both Session and Arrangement view. But Group and Return tracks do not hold clips and therefore do not support clip‑based modulation or automation of an effect’s parameters. (They do support track‑based automation in Arrangement view.) When you want clip‑based modulation or automation — for example when you want different modulations when triggering different Scenes in Session view — you need another solution. 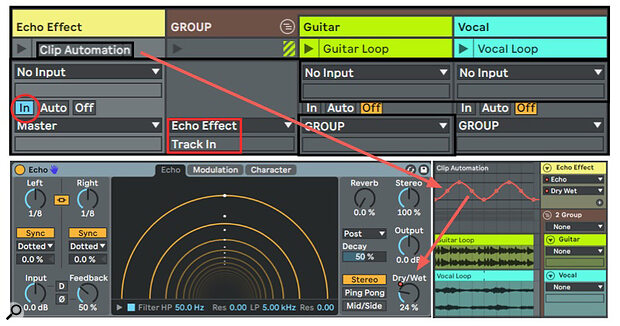 Screen 2: Dry/Wet automation created in audio clips on the Echo Effect track remains active when the track’s Monitoring mode is set to ‘In’.

One approach is to create a separate audio track to hold the effect, and to then route the output of the tracks you want the effect to process to the effect’s track. (If the source tracks already comprise a Group as in Screen 2, simply route the Group to the effect’s track.) You can then insert audio clips on the effect’s track and draw automation and modulation clip envelopes in the audio clips. In order for the effect’s track to process incoming audio, its Monitoring must be set to ‘In’ mode. When you do that, the audio clips on the track will be disabled and appear transparent, but you can still trigger them to apply automation and modulation. It’s good practice to use silent audio clips for this purpose, and you’ll find a very short audio clip named ‘Silent’ in the Samples / Utility section of Live’s Core Library Pack. Once you drag that to a clip slot or Arrangement track and turn on the clip’s Warp button, you can adjust its End setting to the length required for your modulation or automation.

As an alternative to Return tracks for processing several sources with the same effect, you can combine the source tracks in a Live Track Group and then place the effect on the Group track. 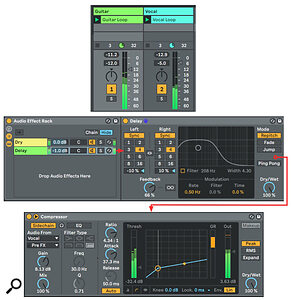 Screen 3: The guitar track passes through dry and delay chains of an Audio Effect Rack. When the vocal clip is playing the delay chain is ducked by the Compressor.In Screen 3, I’ve done that with guitar and vocal tracks to control the amount of Live’s Delay effect applied to the guitar track based on the level of the vocal track. The Audio Effect Rack has two chains: one to pass the unprocessed guitar track through without any ducking and the other to hold Live’s Delay and Compressor effects. Notice that both the Delay and Compressor Dry/Wet knobs are set to 100 percent. With this setup the dry guitar is always present (top chain), whereas the delayed guitar is suppressed when the vocal is present (bottom chain).

Loop Off Beat from the Modulation & Rhythmic section uses Live’s Corpus effect to mangle the timbre of incoming audio and then uses Beat Repeat to mess with the rhythm. To get a sense of what it can do, feed it a simple kick‑drum beat. Start with the Rack’s Dry/Wet Macro knob fully right and the top four knobs fully left. Then use the Corpus Rate knob to modify the pattern and the Corpus Decay knob to adjust the timbre. Increase the Beat Rpt Overton knob next — that changes both Corpus and Beat Repeat settings, but only the Corpus changes are heard until you increase the Beat Rpt Amount setting. Once you do that, adjust the other two Beat Rpt knobs to taste. You’ll notice a compressor between Corpus and Beat Repeat. It has no Macro knob assignments, but explore adjusting the Dry/Wet mix on its control panel. Finally, decrease the Rack Dry/Wet knob to bring some of the original kick back into play.

Strange Creatures from the same section is ideal for adding a bit of motion to pads and atmospheres. Try it with clips from the Ambient & Evolving / Phantasm folder in the Core Library’s Samples section. It features a dry chain and two nearly identical sound‑shaping chains holding Live’s Resonators and Auto Filter effects. These are controlled with the Filter Freq, Motion, and Resonatr Macro knobs. Start with a full‑wet mix and the four top row Macro knobs full left. Adjust the two Resonatr knobs to taste and then fiddle with the Filter Freq and Motion knobs. Depending on the source, the effect may be subtle, and you can change it dramatically by choosing different filter shapes and resonances directly on the Auto Filter panels. Between the Resonators and Auto Filter effects, the first chain has a Grain Delay effect followed by a Delay effect, whereas the second one has only a Delay effect. The Rack’s Delay Amount knob controls each delay’s dry/wet mix, and fully left turns all delays off. Other settings for the delays must be made on their control panels. You’ll find Utility and Vinyl Distortion effects at the beginning of each chain and Limiters at the end. The Noise Floor knob sets the amount of distortion, but any other settings for these effects must also be made on their panels.

Jamaica Plains from the Space section uses Live’s Echo effect for a combination of reverb and creative delays. If you’ve set up the above kick drum and pad examples, Group them and insert Jamaica Plains on the Group track. To tame its default settings, turn the Delay Mod and Feedback knobs fully left and fiddle with the Delay Time knobs. First set the Time 1 knob to 1/16 and the Time 2 knob to 1. Next change Time 2 by single increments to create short falls and rises. Then raise the Delay Mod a bit and fiddle with the Feedback knob. Finally, deactivate the Racks on the two source tracks to hear the Jamaica Plains effect by itself.