In this show Paul White guides you through seven reverb treatments, from simple to complex, and demonstrates how combining reverb with other commonly available plug-ins can produce creative textures and ambience in your music. 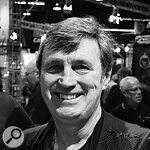 Having established his own multitrack home studio in the 1980s he’s worked with many notable names including Bert Jansch and Gordon Giltrap. He’s played in various bands over the years and currently collaborates with Malvern musician Mark Soden, under the name of Cydonia Collective. Paul still performs live claiming that as he has suffered for his music he doesn’t see why everyone else shouldn’t too!