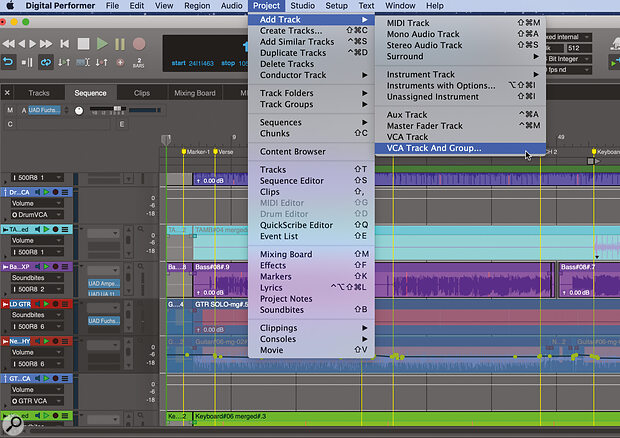 Screen 1: The VCA Track and Group command lets you create a VCA, and assign tracks to it, in one go.

Take control of your mixes with VCAs.

If you haven’t started using VCA tracks in DP, you’re missing out on a powerful way to control the volume, muting, soloing, record enabling, and input monitoring for multiple tracks at a time.

For those not familiar, VCA stands for Voltage Controlled Amplifier. It’s a technology found in some large‑format analogue consoles, where control voltages are used to change multiple faders simultaneously without altering their relative balance. DP’s VCA tracks offer a digital emulation of that technology.

In DP, VCAs control Track Groups. If you already have an existing Track Group of any type (Edit, Mix, Edit & Mix, Custom) that you want to control, go to Project/Add Track/VCA Track. You’ll then see a VCA track appear on the right‑hand side of the mixer.

When it’s unassigned, a VCA track has only a volume fader and buttons for Solo, Mute, Rec and Input. When you assign it to a group (by pulling down its Output menu and selecting a group name), automation controls appear on the channel as well. The group’s designation in the Track Groups window then changes to Custom. It still has its original attributes, but now it’s also a VCA Group.

DP provides a shortcut if you want to set up both a VCA track and the group it will control. First, select the tracks you want in the Group from the Sequence window or Track Editor, then go to Project/Add Track/VCA Track and Group (see Screen 1, above). That creates not only a Track Group from your selection, but also a VCA track that’s pre‑assigned to control it.

Once a VCA track has been configured and assigned, it’s immediately active. If you move its fader, you’ll see all the other faders in the Group move correspondingly. A simple example of how you could use VCAs in a mix would be to assign one to control all of your instruments and one to control all your vocals. Then you can balance the vocal/instrument levels by moving those two faders, without affecting the relative levels in either Group. 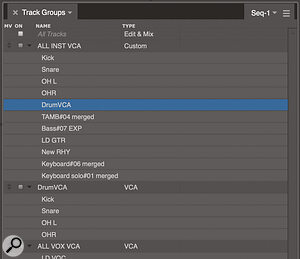 Screen 2: The highlighted Drum VCA track is nested in the larger All Instruments VCA.There’s no limit to how many VCAs you can create, so you can configure setups that are as complex as you want. Any track or Group of tracks can be controlled by multiple VCAs. Not only that, DP’s VCAs can be nested — that is, a VCA can be part of the Group for another VCA, as in Screen 2.

Building on the previous example, let’s say that you had multitrack drums within your instrument group. You could assign a VCA to the drum tracks, which would control the overall drum level, but the drums would also be subject to changes when you adjust your instrument VCA.

Another example of how you could use a VCA is when you’re mixing and get to a point where you’ve got a good balance, but you’re overloading the master bus because the individual tracks are overly loud. In that case, you could assign a VCA to a group consisting of all tracks except the master fader. Then you’d only need to move its fader down to lower everything evenly before it reaches the master bus.

Also, note that DP’s VCA tracks are not just for audio tracks. You can also assign them to groups of MIDI tracks, or even groups that contain both audio and MIDI (see Screen 3). 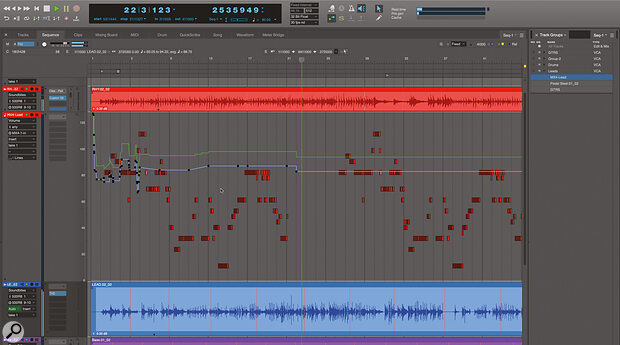 Screen 3: You can use VCAs to control MIDI tracks as well as audio ones.

VCAs aren’t the only way to control the volume of multiple tracks at once. You can do that with subgroups, too, but how they do it is entirely different. Subgroups are created by routing multiple tracks to a common aux track in DP’s mixer. VCAs, however, have no impact on routing: all they do is control volume, mute, solo and record for a select group of tracks.

When you use a subgroup to adjust the levels of a group of tracks, there’s one potential problem. If you’re using post‑fader aux effects on any of the subgroup’s channels, moving the subgroup fader doesn’t change the level of the effects sends, because the channel faders themselves stay put. Thus, turning down the subgroup volume in that situation will make any track with an effects send wetter, and turning it up will make them dryer.

That’s quite different from VCAs, which have nothing to do with routing and won’t change the wet/dry balance of aux effects. The advantage to using a subgroup is that you can add processing to it, whereas a VCA track is simply a control track that has no audio routed to it.

There’s no reason you can’t use both methods together. Make a subgroup and add insert effects to it, and also create a VCA track for those same tracks for controlling volume. Yes, it will clutter your mixer up a bit more, but you’ll have much more control.

DP’s VCA tracks are not just for audio tracks. You can also assign them to groups of MIDI tracks, or even groups that contain both audio and MIDI.

VCA tracks support automation for volume and track mutes only. You can use a VCA on a track that’s already got automation; in that case the VCA will change the relative level of the automation, but won’t overwrite it.

To demonstrate, let’s focus on one verse in a hypothetical vocal track that has volume automation. Say you’d written automation that kept the vocal at ‑4dB for most of the verse, but you automated a drop in level to ‑7dB for one particularly loud word. Now, let’s say you had a VCA that was controlling all the vocal tracks. If you lowered the VCA by ‑2dB and held it there throughout the verse, then most of the verse would be at ‑6dB. The section where you used standard track automation to bring it down to ‑7dB would now drop to ‑9dB. In other words, your automation’s relative shape will not be affected, only the overall level. 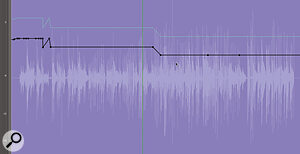 Screen 4: The horizontal green line represents the VCA’s impact on the automation levels.With the vocal track set to show volume automation, you’d see the original data in black and the actual level, after the impact of the VCA, represented by a thin green line, as in Screen 4. You can write automation directly to a VCA track as well, for volume or muting. The process works the same as with other track automation.

The advantages of having a VCA for adjusting volume are apparent. But you can do a lot with the other functions they control, too. Take mutes, for example. You could easily create an automated breakdown section in a mix by grouping the tracks you want to mute in that section and assigning them to a VCA. Then, all you’d have to do is automate the VCA’s mute function to go on at the beginning of the breakdown and off at the end.

Or, let’s say you were recording an overdub session and wanted to be able to check the playback of the overdubbed track along with specific groups of other tracks. It could be just drums and bass, or everything but the drums, or whatever you choose. You could set up VCA faders that would mute all but the desired tracks for several different combinations. Give them descriptive names and place the VCA tracks adjacent to each other in the mixer, and you can quickly set up those custom playbacks without having to hunt around and individually mute or solo tracks. 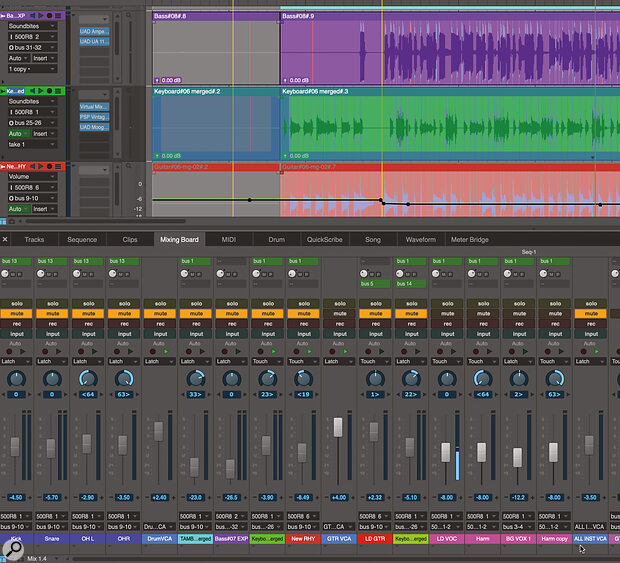 Screen 5: Pressing the mute button on the VCA on the right mutes all the tracks in its group.

Finally, imagine you’re tracking an ensemble. A VCA could be set up for a group consisting of all the tracks to be recorded. Then you could turn the input monitoring on and off as needed when you’re getting sounds before you start recording. You can use a VCA’s ability to turn on and off the record enable function to arm specific groups of tracks. You could even use a VCA as an alternate way to get in and out of manual punches for specific track groups (Screen 5).

As you can see, DP’s VCAs give you a fantastic amount of power, particularly for mixing. Their flexibility makes them extremely versatile, and they’re easy to set up, configure and operate. Once you start using VCAs, you’ll likely find more and more ways to incorporate them into your workflow, both for mixing and tracking.