Screen 1: Drum Synth, with all its kit pieces housed in a Track Stack.

Logic Pro’s Ultrabeat electronic drum plug‑in has been around almost as long as humans first hit a stretched animal skin across a hollowed‑out tree. Although powerful, it can be confusing at times, so an update was long overdue. What Apple effectively did with the release of Logic 10.5 was to split the Ultrabeat’s concept into two parts: the relatively simple Drum Synth and the more complex Drum Machine Designer.

The way to approach Drum Synth is to think of each instance you load into Logic Pro as a single drum in itself — a bit like how, in the early days of electronic drums, you could buy a hardware device that only generated claps or snares. You then use several versions of the drum synth to build up your kit. To get started, load a Drum synth plug‑in onto an Instrument Track. 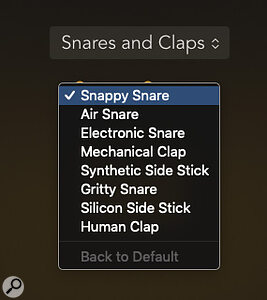 Screen 2: The Drum Synth kit piece variants.You can load in many other drum instrument presets from the usual Logic Pro plug‑in menu or Library, but the Drum Synth is so easy to programme that I suspect most of you will want to create your own bespoke ‘kits’. The default percussion instrument is the kick, but if you click under the Kicks button, you’ll see a pull‑down menu with some ‘starter’ sounds. Each of these has associated parameters that differ between instruments, with some common ones being shared amongst them. As these parameters are basically the same as Logic’s Smart Controls they can be changed — but more about this later. Each drum sound has a pitch and volume control, but the other default parameters have been selected to be the most useful for that particular sound. So, for example, you can shape the ‘pew’ sound, the Decay, Tone and Saturation of the ‘Heavy Kick’, while other types of kicks add Punch and Snap to the sonic picnic. Snares have Body and Dirt parameters, cymbals have Dissonance and Bell, for example, while cowbells have Harmonic adjustment. There’s quite a lot of variation here, easily enough for no two instruments to sound the same.

Once you’ve modified your kick, create another Track using the Duplicate option (from the Track menu or a Key Command) and edit the new instance there. You then follow the same procedure with the other instruments available, from snares and claps, to percussion, hats and cymbals, to build up full kits.

To make your kit easy to manage, once you’ve created all your Drum Synth tracks, select them in the Arrange page and create a Summing Track Stack (from the Track menu), and give your Stack a useful name. This groups all the Tracks together, so that you can process not only the individual Tracks but, as the Track Stack effectively also acts as a bus, the whole ‘kit’ as well (Screen 1, above). It’s also handy to be able to mute and solo the Track Stack, engage overall automation, and export the kits as a stem by selecting it and then bouncing it out from the File menu’s Export window.

Drum Synth works really well with Logic Pro’s Live loops (covered in SOS October 2020), especially if you use the Note Repeat function to rapidly build up looping percussive parts. This little window is one of Logic Pro’s secret weapons, allowing you to repeat any note played at a variable rate. You can assign controllers to this rate parameter, as well as velocity and gate, while in Key Remote mode, an on‑screen keyboard can be used to manipulate the various parameters. You might want to assign the Note Repeat window to a Key Command as it’s otherwise only accessible from the Tool Bar window — a feature I had turned off pretty much as soon as it was introduced into Logic Pro X! 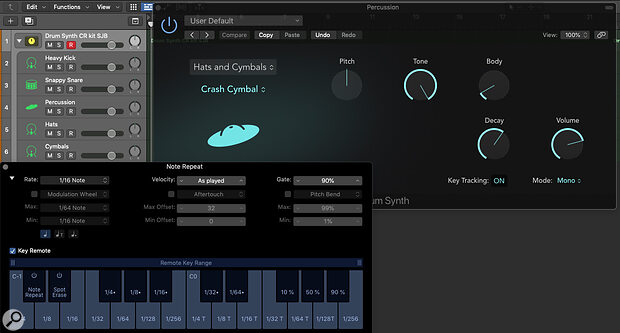 If the beauty of the Drum Synth is its simplicity, the Drum Machine Designer (hence DMD) is its less‑attractive, more complex brother. On loading DMD, you are presented with a grid of pads where your individual sounds will be placed — there are three pages of these, and you use the little dots under the pads to navigate around windows. Each of these pads can be set to send and respond to a MIDI note (using the Learn function), and extra parameters are accessed from the gear icon’s pull‑down menu or a right‑click on the pad.

The easiest way to see how DMD works is to load in a preset, so open the menu from the main plug‑in window gear icon and select Open Library. This will present you with a huge choice of preset kits, and when you load one of these into DMD, you’ll see a lot of effects are already loaded on the DMD Track itself. If you look at DMD in the Mixer, you’ll notice that there’s a little arrow under the Mute and Solo buttons, which indicates that it’s effectively a multi‑output instrument residing inside a Track Stack. If you click on this arrow, it will open up all the tracks within the DMD instrument, complete with track and bus effects. But most of the fun comes from DMD when we create our own instruments — ‘kit’ is too small a word for what this baby can do... 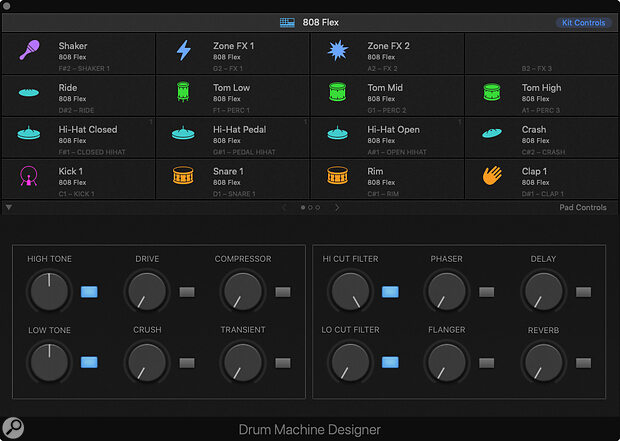 You could create a whole album’s worth of material using Drum Machine Designer alone.

Turn on both Select Pad by Key and Select Subtrack by Pad from the main gear menu to keep DMD and Logic Pro’s Mixer synchronised. Now load up an instance of DMD on an Instrument Track and select Clear All Pads from the main gear menu. The easiest way to start building a DMD instrument is to drag Regions from the Arrange page, one (or many) audio files from the Finder, or the loop browser, straight onto a pad. Multiple additions will assign Pads automatically. You can also open DMD directly by dragging audio to the Track area. The pads can then be assigned MIDI input notes (there’s a handy GM preset available) for playback via a hardware controller. Once the Pads have samples assigned, select the Q‑Sampler Main or Detail buttons to further edit your audio. DMD uses Quicksampler as its sample engine (covered in SOS January 2018), and if you look at the Mixer Track that the Pad is assigned to, you’ll see that you can open the full Quicksampler for further mangling.

You’ll have noticed that if you select a pad and the Pad Controls button, you’ll see some knobs have been added to control basic functions. This area is also part of Logic Pro’s Smart Control feature and can be modified to taste. For example, you may want to control the parameters of a distortion plug‑in on a Pad’s Track. To do this, select the Pad or Track, add your plug‑in and open Smart Controls from the Window menu. Choose an unmapped Smart Control, click on the ‘i’ button to open the info panel, and go to the pull‑down menu next to Unmapped. From here you can assign a parameter to this Smart Control, which will then be reflected in the Pad Controls in DMD. If you click on the bar next to the DMD kit’s name, you will see the Pad Controls for the whole kit. 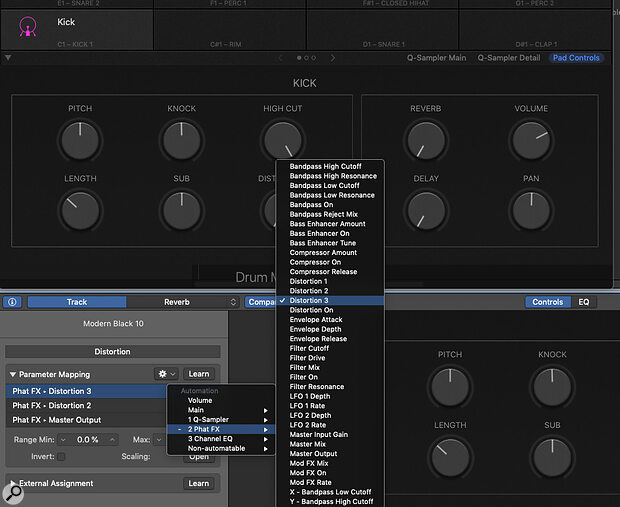 Screen 5: A parameter assigned to a Smart Control will be reflected in Drum Machine Designer’s pad controls window.

To layer the sounds assigned to pads, first make sure the pads/sounds you want to layer share the same MIDI input note. Then right‑click on one of the pads and select Resample Pad. This effectively plays back all the samples assigned to these pads into Quicksampler, and drops the result onto the next available empty pad. If you want to emulate instruments where only one note can be played at a time (such as a hi‑hat), you can assign multiple pads to the same group, again from the Pad’s gear menu. I find that placing loops onto pads and playing them from my Arturia Beatstep Pro is a really easy way to build up rhythm Tracks — and it’s a brilliant live tool too.

But DMD is not just about the drums. If you click on the + that appears when you hover the mouse over an unused pad, this will activate it and also create a corresponding sub‑Track in the mixer. You can then load any instrument plug‑in onto this sub‑Track. Which note is played on this instrument is defined by the output MIDI note on the Pad itself, or you can play the notes Chromatically by selecting the sub‑Track of the instrument and recording your MIDI data there. You can, of course, also load Drum Synth as an instrument in DMD. Because DMD is actually a Track Stack, it and the individual sub‑Tracks can be treated exactly like other Logic Pro Tracks.

To save your bespoke kit, open the Library, rename your kit by double‑clicking on ‘Empty Kit’ at the top of the window, and save using the button at the bottom right of the Library.You could create a whole album’s worth of material using Drum Machine Designer alone. Used in conjunction with the Step Sequencer or Live Loops, complex percussion tracks can be quickly built up. But DMD’s ability to assign whole instruments to its Pads takes it into creative areas that are miles away from the loops and bleeps of dance music.