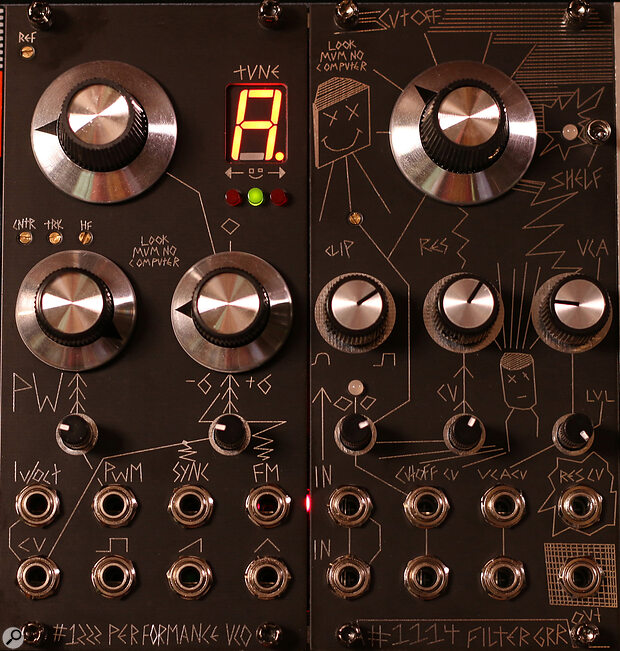 Look Mum No Computer (LMNC) is the alter ego of synth‑punk engineer and audio adventurer Sam Battle. [Check out our SOS Podcast with Sam.] Over half a million YouTube subscribers watch Sam build crazy synthesizers out of everything from Furbies to church organs. He regularly performs with modular synthesizers, and it was that experience that inspired him to create his Kosmo modular format, which took Eurorack technology and blew it up to 20cm in height. This gives him far more room for larger knobs, better access in live performance, and the more reliable full‑sized jacks. His designs have only been available as front‑panel and PCB kits so you can build your own Kosmo modular — until now. In collaboration with Christian Bloch of Funque Mod and with no small amount of irony, the LMNC modules are being shrunk back down to Eurorack size and released as finished modules.

The first two modules in the Eurorack range are the #1222 Performance VCO and the #1114 Filter Grrr. Christian tells me that other than a move from through‑hole to surface‑mount components, the Eurorack versions are identical to the original Kosmo designs. They also carry the whole LMNC vibe in the original Sam‑scribbled artwork on the front panel and the suitably cool and retro knobs.

When playing gigs Sam found the temperature change between getting his modular out of the van and on to the stage would throw all the oscillators out of whack. He had to retune and sometimes recalibrate oscillators during performances. The #1222 Performance VCO sorts this out by including a built‑in tuner slapped directly on the front. Similarly, all the calibration trimmers that are usually hidden away behind a module emerge on the front panel. So, any required recalibration can be done without removing the module.

These two features make for a very useful and performance‑friendly oscillator. And more than anything else, that’s the point of this VCO — it’s for performing. It’s not packed with elegant nuance, clever modulations, or probabilistic wave folding; this is bog standard, with three waveforms coming from a CEM3340 oscillator chip, off you go. The waveforms in question are square with pulse‑width modulation, sawtooth and a rather understated triangle. There’s a sync and FM input for added zaniness, and a second CV input on the pitch for transposition or vibrato. The octave switch makes a lot of sense in performance as you can switch up your bass lines to lead lines and back again with a flick of the wrist.

The waveforms are slightly odd. They are unipolar and uneven, with the triangle waveform having about half the energy of the pulse. This can lead to some unexpected outcomes when mixing with other bipolar waveforms. However, once you plug in a melody, it all thunders along nicely.

The tuner is a brilliant feature, assuming 440Hz is your thing, and you’ll very quickly wish all your oscillators had one. It’s a shame that there’s no external input to access the tuner — that would have been a chef’s kiss of a feature. Otherwise, it’s a solid oscillator with a great vibe that’ll provide you with the waveforms you’ll actually want to use.

Sam refers to the #1144 Filter Grr as a bit of a weird one. It’s a strange stepping and distorting filter with added ‘Grr’. It came from spending time with the LM13700 transconductance amplifier in a basic filter circuit, and he kept fiddling with it until it sounded ‘funky’. The result is an overloading low‑pass filter, with an over‑excited resonance and an overactive VCA. All this combines into a deliciously unruly, characterful and explosive filter. It’s a riot!

Back to the specs for a moment, you have two audio inputs and a single output. The built‑in VCA has two CV control inputs, an attenuator and a level knob. You can drive it with an envelope and LFO, open it up for drones, or pass it through to another VCA. The cutoff is the big knob at the top, which has two CV inputs and an attenuverter for non‑inverted or inverted modulation. So, you can envelope the cutoff in either direction while also sweeping it with other modulators. The resonance also has CV control with attenuation, so you can make the deepening terror of the feedback engine part of your patch. There’s a Shelf switch which I’m not entirely sure about, but when you switch it on, the filter spasms into distorted self‑oscillation. Finally, there’s a Clip knob which squares off all your corners in case it’s not sounding nasty enough.

It has a good amount of bounce at low resonance and can be soft, gentle and revealing. With a little bit of Clip and some enveloped cutoff, it can lull you into a false sense of security, believing that the sweetness will last. But you are inevitably drawn towards the Shelf switch and the mighty knob of resonance. When you pump it up the behaviour lurches from the strange to the insane as it consumes your bass lines and screams from its resonant bowels. I have a System80 JOVE filter in my rig, which is satisfyingly gooey and based on the Roland Jupiter synthesizers. The #1114 Filter Grr is the absolute and brilliant antithesis of that.

It’s evident that the filter was designed with the #1222 VCO and its unipolar waveforms in mind, so unexpected quirks when used with other Eurorack modules should, perhaps, be expected.

With more regular bipolar oscillators, the waveforms can sometimes get lost. When you rediscover them at around the one o’clock mark on the cutoff dial, they appear transformed into narrow unipolar pulse waves. I have no explanation for that. However, if you engage the Shelf control, which, I think, skews the waveforms with some kind of offset, then the filter acts more normally, and the waveforms are more like themselves for an entire turn of the knob. So, Shelf should be on for regular waveforms and off for weird pulsiness... or off for the #1222 and on for self‑oscillation? Oh, I don’t know, work it out for yourself!

The #1114 is an unusual filter with bags of character and a need to destroy itself. It’s not for the normal or the faint‑hearted.

The uneven waveforms and weird behaviour of these modules could be seen as flaws, but Sam’s exuberant personality somehow turns them into features. For me, it’s a perfect pair of playfully punk modules that will liven up any rack. All you need is a couple of envelopes, and you’ve got a hard‑working synth voice.

The oscillator is solid and useful, while the filter is a party that’ll have your neighbours banging on the walls. The translation down to Eurorack format is nicely done, but it does bring compromises on the sizing and knob arrangements. But unless you like to pogo when playing with modular, you’ll have no problems.