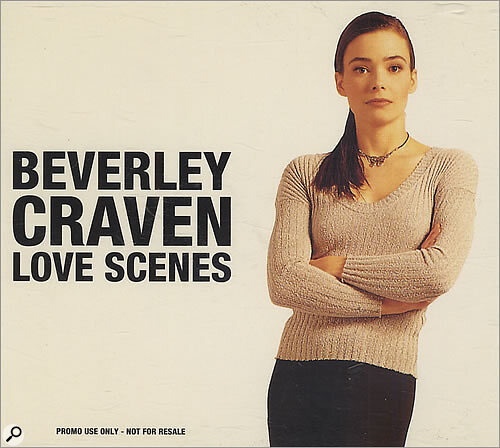 The first album from this chart-topping pianist and chanteuse was a million-seller; her second looks set to continue the trend. Ian Gilby was invited into the Craven home studio to discuss the enduring appeal of MOR.

Two Top 5 singles and a spate of live performances catapulted Beverley Craven to the heady heights of stardom in 1990, culminating in a Brits Award for 'Best British Newcomer' and a million-selling debut album. Having captured the MOR hearts of the Great British Record-Buying Public, suddenly there was nothing. Another victim of the industry hype machine, perhaps? No way — Beverley's finely crafted ballads and breathy vocal delivery are simply too endearing to go unrewarded. So had the record company dropped her? Given the dance-crazed apoplexy of today's charts, this seemed a distinct possibility. The explanation for Miss Craven's lengthy absence was simple — Beverley had become a mum, taking the brave step of placing her blossoming career on ice in order to bring up her daughter, Mollie.

Then late last year, after a three-year hiatus, this Sri Lankan born singer-songwriter returned with her long-awaited second album, Love Scenes, a collection of quintessentially English ballads that echo the naive feel and sentiments of her first outing. Not wishing to change a winning formula, Paul Samwell-Smith was recalled to the producer's chair and Beverley surrounded herself once more with a team of top session musicians, many of whom had kept her company on her 1992/93 gigs.

"That was a blessing in disguise which made finishing the album that much easier," she explains, curled up on the sofa in her north London 'home studio', sipping a cup of tea. "My voice was nicely loosened up from the touring and the band all knew the material inside out." Guitar solos from Jeff Beck add spice to several Love Scenes tracks, while Russ Kunkle's artful drumming underpins the entire record, enhancing the delicate moods of each song beautifully. 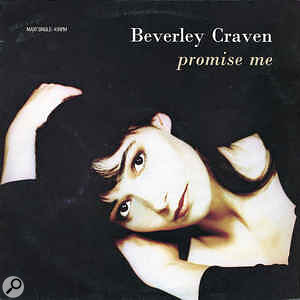 'Promise Me' catapulted Beverly into the spotlight, selling over one million copies.Like it or not, there is considerable demand for Miss Craven's middle-of-the-road style of music, and she is the first to admit it. "There is a big market out there for female singer-songwriters, thanks to people like Kate Bush who made it easier for female artists like me to find an audience." Beverley should know; her eponymously titled debut album went on to sell over 700,000 copies in the UK and over a million worldwide during 1991/92.

Even so, the lady was not always so at ease with her present musical persona: "For quite a while I fought against the MOR tag, because I felt I wanted to be a bit more hip, a bit more poppy. I tried writing pop songs, but they were rubbish. So I plumped for the ballad side of my character, which is actually what I prefer. The songs I write now are more meaningful."

Thoughtful lyrics and melodies you can hum characterise Beverley Craven's music, so how does she go about writing a song? Does she jam along to a drum track until inspiration hits, like most of us?

"Sometimes, yes, but I generally start writing a song from the beginning — not with the chorus or hook, like some people do. That way I can feel where the song wants to go. If I start with the chorus, then I have to work backwards, and that's much harder. I had the chorus for 'Feels Like The First Time' for about six months before I could think of a suitable verse. I'm a slow writer and songwriting is usually a painful process for me."

Whilst preparing her latest album, Love Scenes, Beverley was commissioned to record a version of 'The Winner Takes It All' for a celebratory album of ABBA songs. Although she served up a considerably rearranged white reggae version of this classic pop tune, she does claim it opened her eyes to the beauty of 'covers'. "There's a ready-made song for you just waiting to be played, complete with lyrics. It's very tempting." Too tempting by far, it would appear, for the charts are littered with cover songs.

So what inspires Beverley to create her own music? "Things on TV, conversations with friends... I like to write about stuff that has an effect on me. I don't like to be in a position where I have to write a song, because then it doesn't come from the heart. I prefer to use the writing of a song as an outlet for my emotions."

I'm a slow writer and songwriting is usually a painful process for me.

Although classically trained on piano from the tender age of seven, Beverley does not habitually score out her music. "What's the point, when you've got a demo studio at home?" she retorts. On occasion she will resort to manuscript and pen, though purely as an aide memoire for an intricate piano part or string arrangement idea. Most of the time, she'll simply do as everyone else does and indulge in a spot of home recording.

The Craven home studio is modestly equipped and centred around Beverley's Korg Concert 3500 electric piano. "The reason I got the Korg piano is because it is quieter than a grand piano. Living in a house like this, you just couldn't play a grand past eight o'clock at night. But you can turn the volume down on the Korg or wear headphones. It's touch-sensitive with weighted keys, and as close as you can get to a real piano feel."

Other sound sources include a well-travelled Juno 106 synth, a Korg M1R (its 12-string guitar patch was used for the opening to 'Love Scenes', the title track of her latest album), and a Yamaha RX5 drum machine. Beverley has nothing but contempt for the latter: "I can't get a good feel on it. I wish I'd stuck with my TR707; it was so much easier to operate. Trying to get a good shuffle feel out of the Yamaha, I end up almost wanting to throw it across the room. It is so 'stiff'. It takes me all day to get it feeling like a real drummer."

Although Beverley's home setup is supposed to function as a sketchpad for her musical ideas, she isn't convinced that her move to 8-track was the right one. "I still can't really decide whether I did the right thing in updating from a Tascam 244 Portastudio to this Fostex 8-track and [Allen & Heath] mixer," she muses. "There are a lot more knobs and buttons, which kind of get in the way of my songwriting.

"Really, this equipment is just a notepad for me, because once I've got the meat and potatoes of the song down, it's then off to the studio to record it." Beverley likes the work ethic of a professional studio, preferring to record locally in Mayfair Studios or Abbey Road, and claims she wouldn't ever want to do everything herself. "There's no point me having mastering quality at home."

Other home studio acquisitions stem mainly from friends' recommendations. The ancillary rack houses an Alesis 3630 Compressor and a Quadraverb, plus a Lexicon LXP1 reverb. "I went for a long, long time without a reverb at home," she admits, "but when I eventually bought one — I think it was one of the first Alesis MIDIverbs, actually — the difference it made was just incredible. Reverb's not a luxury for demos, it's a necessity, especially on vocals."

Having undergone commercial scrutiny by her A&R manager at Epic Records, Muff Winwood, the 'best' songs were chosen from Bev's home demos and a visit to a rehearsal studio arranged with the band. "I start playing them the new songs on piano," Beverley explains, "and by the time I get to the chorus, they've usually all joined in! They know me so well."

For the Love Scenes sessions, producer Paul Samwell-Smith adopted a very traditional approach to recording, with the band acoustically separated in booths and playing as an ensemble. "There's a bit of spill sometimes, but not a lot," Beverley explains, feeling this live approach best suits the acoustic nature of her music. The band tend to run through each song several times, looking for that elusive great take. "If we feel there's one that is almost a complete performance but may need a few repairs, then we'll go with that. If we're miles off, then we'll take a break, have a cup of tea and try again."

Once half a dozen basic tracks were down, the band departed and in came the keyboard players, Gary Sanctuary and Richard Cottle, to add their overdubs. Backing vocals were next on the agenda. "I really look forward to backing vocals day," Bev enthuses, "because they make such a difference to the track. I generally write the BVs [backing vocals] when I'm composing the song. I can hear the parts in my head, and often they're an integral element of the tune. It's fun deciding whether to double-track them or what sort of reverb you want on them..."

By surrounding herself with seasoned pros already familiar with the new material, which had been honed to perfection on tour, Beverley's studio time was kept to the minimum. "We were pretty quick," she reveals, whilst freely admitting to the occasional hiccup. "Sometimes a track just rejects all your ideas. 'Feels Like The First Time' was a real bitch to record, because I had a fixed idea of how I wanted it to 'feel' from day one and we were unable to achieve it. After six or so attempts, we decided that however it turned out was the way it was going to be! 'Love Scenes' was tricky too, because I wanted it to be a really romantic waltz with some very 'film score' type strings [courtesy of the London Chamber Orchestra]. I'm pleased with the way it turned out, though."

So what does the future hold for Miss Craven? "I would love to write an Andrew Lloyd-Webber style musical, full of massive melodies, and see it performed on a West End stage."

Beverley Craven's home setup is based around her much-loved Korg electric piano. It is more of a writing room than a full-blown studio, occupying one wall of a pleasant, first floor lounge in her north London home. Her equipment includes: