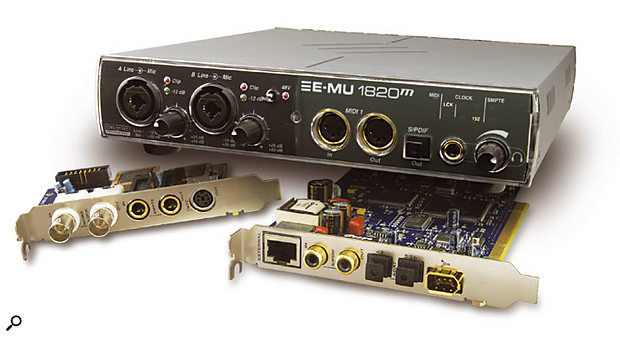 The reason I'm contacting you is that I have been quite shaken by a soundcard review which appeared in the October 2004 edition of PC Pro magazine. You see, it is my intention to retire my beloved Studer Revox A700 half-track stereo tape machine and purchase a high-quality digital system. The glowing manufacturer's specification of the Emu 1820M soundcard, together with your own excellent review, meant that I was days away from purchase; that was until I saw the test specs in the PC Pro review.

For the line out, they give figures of 1.3 percent THD (Total Harmonic Distorion) at 1kHz and 0dB and 79dB signal-to-noise ratio. For the line in, figures of 0.7 percent THD (1kHz, 0dB) and 82dB S/N ratio are given. Apparently the Emu's analogue circuits are clipping at only 0db. I find this very disappointing.

For a soundcard purporting to be of the highest quality, PC Pro 's measured performance figures seem to me to be quite unacceptable. They do not state if the noise figures are weighted but even so — 1.3 percent distortion at 0dB? It is ironic, is it not, that the 1820 is beaten in these areas by Creative Labs' NX and ZS soundcards, the ZS being PC Pro 's 'Labs Winner'.

What I would like to know is, firstly, in your own review, were detailed distortion and S/N measurements taken, and, secondly, assuming that PC Pro 's measurements are correct, how good would you consider the performance of the 1820 to be?

PC music specialist Martin Walker replies: I don't think you need worry about these seemingly poor headroom and distortion figures. Although I haven't had the chance to read this PC Pro roundup yet myself, it's already the subject of much mirth on the SOS Forums, since at least some of its findings seem to be seriously flawed.

For a start, no soundcard accepts signals above an input signal level that corresponds to 0dBFS — this is by definition the point at which digital clipping commences, and I can only think that the PC Pro tests went slightly beyond the input level needed to do this, which would certainly account for those high distortion figures. In practice, when recording with a digital soundcard it's very important that you allow at least a few dBs of headroom to avoid clipping. My own tests carried out for the SOS review of the 1820M gave a THD (Total Harmonic Distortion) measurement of an excellent 0.0009% under these conditions.

I also measured the Emu 1820M's dynamic range as 117.8dBA, nearly 12dB better than Creative's Audigy 2 ZS Platinum Pro at 106dBA. Both of these figures are reasonably in line with the manufacturers' own figures, and given that both cards are essentially from the same manufacturer (Emu is owned by Creative, and the 1820M bears the logo 'Creative Professional' on its front panel), I think even they will have raised an eyebrow at the PC Pro figures.

Just one thing regarding one of the Q&A entries in the September issue, about using phase cancellation to remove the vocals from a track — while Hugh Robjohns' reply states that it's impossible to isolate a vocal using the phase inversion trick, in my experience this is not the case. You can isolate a vocal if you have an instrumental version of the same track, where the instrumental is the same length and its frequency content is identical (minus the vox) to the vocal track.

Simply line up the two tracks (vocal and instrumental) in an audio editor, invert the phase of one and mix the two together. The identical frequencies cancel each other out, leaving just the vocal.

This is a common trick used by many people, especially on the dance scene, to create bootlegs and mash-ups. A recent example was Justin Timberlake's 'Like I Love You'. The CD single consisted of the full vocal mix and an instrumental, both exactly the same length, making it easy to extract the vocal. And more recently, a vinyl release of Brandy's 'Lets Talk About Our Love' also features an instrumental, hence the flood of bootlegs created using this track at the moment. However, I'm surprised that people have achieved such good results from vinyl, as once the tracks pass through the processes needed to get them into the digital domain, artifacts which would affect the crucial need for the frequencies to be identical would surely appear. Maybe they just got lucky?

News Editor David Greeves replies: On Hugh's behalf, let me first of all say that, in his reply, he was only talking about what could be removed using phase cancellation on a single stereo track, using one channel against the other. But you're absolutley right — combining a vocal mix with an instrumental mix while inverting the phase of one of them will cancel out everything but the vocal, so long as the two are identical in all other respects.

If the vocal and instrumental versions have been mixed or mastered differently to even the smallest degree, the trick won't work. The material that you want to remove from the two waveforms must be identical in both frequency and amplitude if it is to cancel out completely.

I can well believe that this can be done in the case of the recent releases you mention, though — while record companies will never openly condone the bootleggers, most now realise the value of the publicity they receive when a fashionable 'mash-up' of one of their releases causes a stir in the clubs. In addition to including instrumental versions on singles, the authorised release of a cappella (vocals only) versions is practically an open invitation to remixers — the a cappella version of Jay Z's The Black Album , which spawned DJ Dangermouse's controversial The Grey Album , is perhaps the most prominent recent example. Such is the cachet associated with bootlegs and white labels (in dance music, at least), that it's not uncommon for record companies to try and promote their records by putting out legitimate copies made to look like bootlegs!

In regard to using vinyl, I would think that small variations in the speed of the turntable would be a bigger problem if transferring tracks to a digital system one at a time. Of course, if you're performing the phase cancellation trick on the left and right channels of a single track, you can do it all in the analogue domain (provided you have a reasonably well-specified mixer) and avoid these problems.