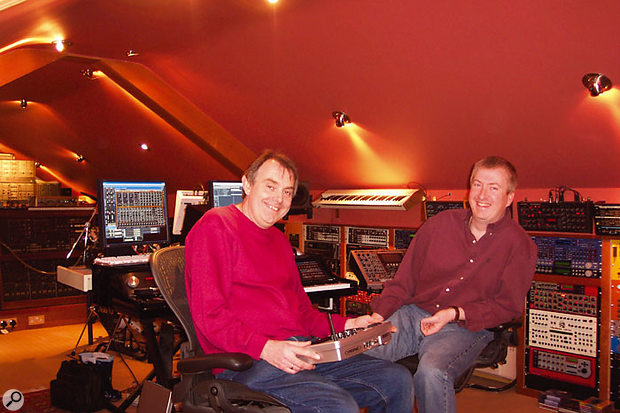 One Christmas, when I was just three or four years old, my father took me to Fenwick's department store in Newcastle-upon-Tyne to meet Santa Claus. Fenwick's toy department is legendary because every Christmas it's crammed to the rafters with more goodies than you can shake a djembe at. Standing in the middle of that crowded room, I'd never seen so many 'must have' toys in my life. Much to my father's astonishment, I found myself absolutely speechless. Forty years later I'm standing in Philip Taysom's studio and the very same emotions come flooding back.

Walk through the front door of Philip's studio and you're immediately confronted by two Fairlight CMIs, both recently restored. To the left is a stack of three PPG Wave synthesizers and an even rarer Wavecomputer 360. "These are here because we've run out of room upstairs," says Philip with a smile. Gosh.

Philip's studio is located on the first floor of a converted barn. It's an unusual design for a studio, around 35 feet in length, roughly 15 feet wide, and with steeply sloping sides. Anyone taller than five foot four is in for a stiff neck.

Dominating the studio is the analogue modular synth area, a semi-enclosed space accommodating, amongst others, a complete Roland System 700, a 23-module Roland System 100M, and Polyfusion, Moog and Korg semi-modulars. Finishing the square is a complete PPG setup comprising a Waveterm B, two EVUs (Expansion Voice Units), Wave 2.3 and a matching PRK FD keyboard. The main floor space is shared between a Roland V-Drum kit (modified to trigger Simmons and Dynacord analogue drums), another recently restored Fairlight Series IIx and a Synclavier 9600 'master keyboard.'

With so much equipment in the studio, fan noise is obviously a problem. Some of the hardware has been enclosed in cabinets, which proved brilliant at deadening the noise but equally brilliant at frying the equipment, because there was virtually no airflow inside! Philip: "Without cooling, the cabinets can get to around 42 degrees centigrade in a matter of minutes, so a set of triple-insulated doors — basically conservatory doors — were installed. The internal frames were then mounted on three blocks of neoprene separated by hardwood, so that they were acoustically isolated from the rest of the studio. Finally, 7.5 kilowatts of air conditioning were mounted under each cabinet." That sounds like a lot of cooling. Does it work? "Yes, but in summer the Synclavier cabinets still get to about 24 or 25 degrees."

"A mate and I had a bet that if I was able to give up smoking for a year I would buy a Minimoog — something I'd always lusted after," says Philip. During that year Philip began researching a 'wish list', because so much vintage equipment had become affordable as everyone rushed towards soft synths. Philip cites his Prophet T8 as a good example. He'd originally seen this instrument demo'd at Syco in the 1980s for around £8000, but the same machine could now be bought for around £1200.

Philip continues. "In the '80s I had a lot of gear but I sold it all and thought I'd never return to owning a studio again — but in 1996 I bought a Korg 01/W Pro from a guy in Hull. It was his infectious enthusiasm that got me interested again. Then my friend Paul Gilby [brother of Ian Gilby and co-founder of SOS] taught me so much about recording and mixing, explaining the intricacies of EQ and how to construct the mix. Paul's a former lecturer with great skill in explaining complex theories — so I got free lessons from a master!" 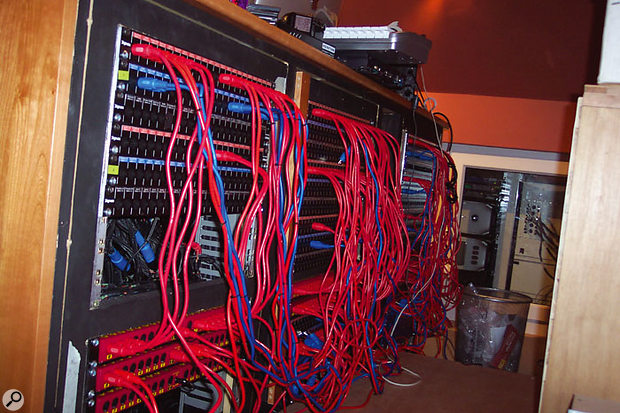 The rear of the complex patchbays. Wiring of the studio took around 18 months in total.Photo: by David Hughes

The Korg synth was the start of something big, and now, around three years later, Philip has an astonishing array of kit. The first step in making it all accessible and usable was to solve some basic engineering problems. How, for instance, do you move something as heavy as, say, a CS80 or a DX1?

Philip found a manufacturer of shelf-runners so that moving these instruments would require no effort. The runners currently installed are rated at 400 pounds per side, so moving such a weighty keyboard is now very simple indeed and can be accomplished with little more than the push of a hand.

The next step was to maximise the available space through careful design, so a local cabinet maker, Martin Hall, was contracted to fit out the studio area with custom shelving and racks in cherry wood. 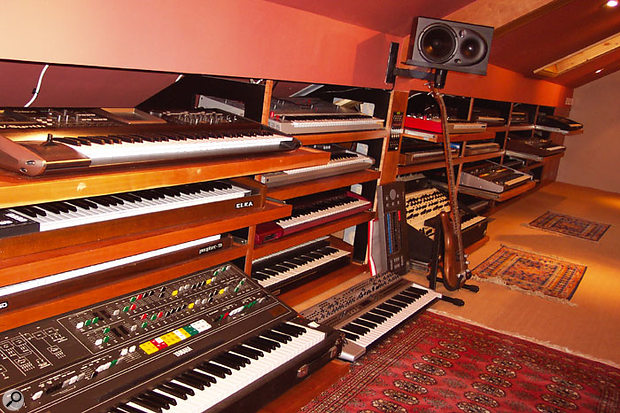 Just some of the racked-up keyboards the studio is crammed with. The keyboard bays are set up so that all the gear is readily movable and will function when plugged elsewhere.Photo: by David Hughes

"The key thing I insisted on was that everything had to be cabled up," explains Philip. "I wasn't prepared to have wiring lying across the floor." The wiring solution is, indeed, very elegant and took an amazing 18 months to complete. Behind the equipment in the main rack there's another sub-rack which carries a set of plates. Everything is connected to multicore cables on these plates, which are then mounted sequentially so that, for example, slot three connects to bay three, and so on. Each sub-rack is capable of taking 12 instruments, four per keyboard bay, and there's complete flexibility as to where an instrument sits. Everything is connected — MIDI, CV, audio, digital audio — and all of the cabling goes back to three patchbay matrices in the desk: one for analogue audio, one for MIDI and one for digital audio. In addition, all of the wiring is balanced, and some provision has also been made for optical. 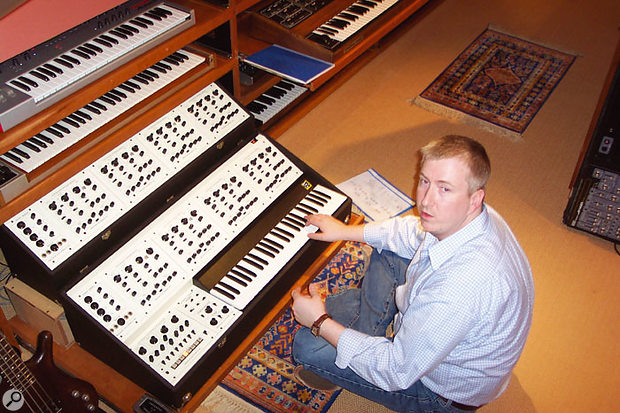 Even heavy keyboards such as the Oberheim 8-voice slide out from their bays easily on heavy-duty shelf runners.Photo: by David Hughes

Given the slightly unusual dimensions of the studio, the length of the cable runs would require some fairly novel engineering solutions. A good example is the recently installed Roland V-Synth. To drag and drop samples from a Mac over USB is fine over short distances, but in this instance, where the cable run is nearly 40 feet, USB doesn't work too well. To remedy this problem, a pair of USB extenders that utilise UTP wiring, made by Geffen in the USA, were installed. The USB connection will now work reliably over 300 feet. "An expensive but effective solution," says Philip.

I asked if there had been any major problems with the cabling system. "At the modular end we made some mistakes," responds Philip. "We designed it with everything physically in a fixed location and totally unusable. What we've now done is to build a 48-way patch-line system within the modular area so, rather than having a collection of modulars, there is now one very large modular made up of all the systems. If I want a patch of a Roland System 700 VCO filtered by the RSF Kobol, gated by a Polyfusion EG, with a final VCA stage from the Oakley modular, it's easy. The patch matrix makes that possible. There are also localised Kenton Pro 2000 interfaces — using both primary channels of CV and gate and all six aux outs — underneath each bay."

With everything up and running, the studio draws about 85 amps and a second 100-amp supply has just been installed by the local grid operator, specifically for the studio. However, they're still exceeding their limit, so negotiations for another 60- or 100-amp supply dedicated to the air-conditioning are currently under way, to provide some more headroom on the main supply. "That's going to cost between £10,000 and £20,000," explains Philip. "But it's a lot cheaper than moving to another building." 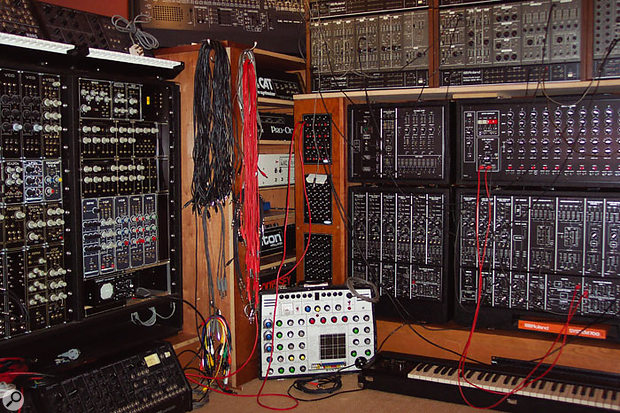 With so many instruments installed in the studio, I was curious to know how they switched the instruments on and off. Philip explains. "I spent several years designing data centres, so we've applied some of the techniques I learned there to develop power-control systems inside the racks. Some really clever electricians from Spa Contracting in Harrogate came up with a brilliant solution using remote controllers. We can switch the whole lot on and off with just a key that has no current going through it, so it's completely safe.

"The next thing we have to install is a fire-control system. That's going in over the next couple of weeks. We'll get both audible and visual alarms if the mains fails in either of the cabinets. In addition, if it detects smoke, it will kill the mains locally to the cabinets and then, ultimately, to the entire studio."

Listening to a mix through the main desk, I noticed some mains hum — hardly surprising, given the number of instruments in the studio — and I wondered if there was an earthing problem somewhere. Philip explains: "This is a 450-year-old house, and we didn't realise that the whole studio was earthed off the earthing rod for the main house. An earthing rod should be, say between six feet and nine feet long. We went to investigate, pulled the earth out and only four inches came away because the rest had just rotted! Basically, we had no earth. We've had a massive job re-earthing. It's already making a difference but there's much more work to do."