The studio's interfacing and composition facilities are centred around Emagic's Logic and Philip makes extensive use of the Emagic Unitor 8 and AMT8 MIDI boxes, which provide up to 60 ports of 16 MIDI channels each on the studio G5 Macintosh. "I'm currently using 48 ports," adds Philip. "And we're still expanding."

All the MIDI sockets from each of the keyboard and rack bays are presented on a large patch matrix at the back of the desk, and short MIDI leads are used to route each instrument to a Logic MIDI port. However, many of the older instruments either have no MIDI Thru, or the Thru is highly inefficient (on some of the gear it can add a 200ms latency!). To open up some of those MIDI Thrus, a number of 8-way Thru boxes have been cascaded together. Philip admits that it's a slightly Heath-Robinson arrangement, but the cabling is all colour-coded — so, for instance, blue means a MIDI Out from the instrument, while red signifies a MIDI In. "I wish MIDI had been on a lockable connector instead of on a DIN," observes Philip. "It's so easy to come back here, brush past something and break a connection."

Philip's original choice of mixer was a Mackie CR1604, although he quickly upgraded to an Allen & Heath GS3000. "I had a look at the Mackie Digital 8-Buss but when configured with solely analogue ports that was too expensive for what it offered," says Philip. "I looked at some really silly options, such as the Amek Mozart or Big. I even toyed with the idea of a second-user SSL. Then I had a demo of a Sony Oxford and someone told me that they were developing the Oxford EQ for Pro Tools. I'd never considered Pro Tools because I'd always thought of it as a recording system and I very rarely record anything multitrack."

A demo of Pro Tools HD with a Control 24 left Philip convinced: "I actually get very little time to come up here — sometimes as little as 30 minutes a day. To work on a different idea it can take more than an hour to set up an analogue desk, re-patch the matrix and get everything ready for a session. So Pro Tools is ideal. I simply recall the session file from disk, complete with configuration."

The number of inputs available is obviously a major strength. At the moment, the installation uses 96, but the wiring is in place to extend this up to 128 inputs. Another strength is that all of the patching is in software. Philip: "For the Oberheim 8-voice synth there's a patch that adds just a tiny amount of reverb. I don't have to start patching cables to recall this, simply drag and drop it on screen. As I get more time up here we can start to deal with the really noisy stuff like the [Sequential] Pro One and the [Korg] MonoPoly and patch in a permanent gate on the relevant channel within Pro Tools for them, just to catch some of the low earth noise that you get because they're old machines."

I noticed that there are no mixing facilities in the modular area and wondered if this caused any difficulties. Philip: "While we can't edit the mix when we're down there, we can at least build up a layer of audio that we can control from up here or via the Synclavier. I've been looking at the new Digidesign eight-channel control surface and plan on trying out one in the modular area, connected via the Geffen USB extenders we've already used with the Roland V-Synth."

Monitoring duties are currently taken by Mackie HR824s and HR626s wired with a Mackie subwoofer for 5.1 monitoring, while a pair of Genelec 1029s provides localised monitoring in the modular-synth area. "I want more advanced monitoring," comments Philip. "So I've been looking at Genelec 1038s, but I really favour the Dynaudio Air 25; with the built-in DSP I can compensate for the acoustics of the room. It's an idea I really like."

With a project of this magnitude, I wondered if there had been any major changes or redesigns along the way. For instance, I noticed that some of the equipment is now being bolted to the walls. Philip explains: "Yes, we've run out of space already and we're now bolting stuff to the bargeboards. For instance, with the Voyetra keyboard you can play it via MIDI but it's just so much nicer to play it via the VPK keyboard, the way it was intended. So that's why the keyboard is bolted above it. And with the Virus C it makes more sense to mount it on the wall instead of taking up another 4U of rack space. Rack space really is at a premium. I suppose we could lose a keyboard bay to make way for another rack, but I'm not keen to do that."

Philip's studio technician, Roy Harrison, briefly joins the conversation. Roy: "This is certainly the biggest job I've ever done in all of my career. Every keyboard has every facility. You can pull one out and put another back in to the same space and it'll just work. And it's not just audio, it's power, MIDI In, Out and Thru and now digital audio. And all patchable too."

Philip: "Out of the thousands and thousands of cables we've dragged through here, there's only been one minor problem. It's a real testament to Roy's ability. How much cable is there in here? Somewhere between four and seven kilometres?" "Something like that," responds Roy. 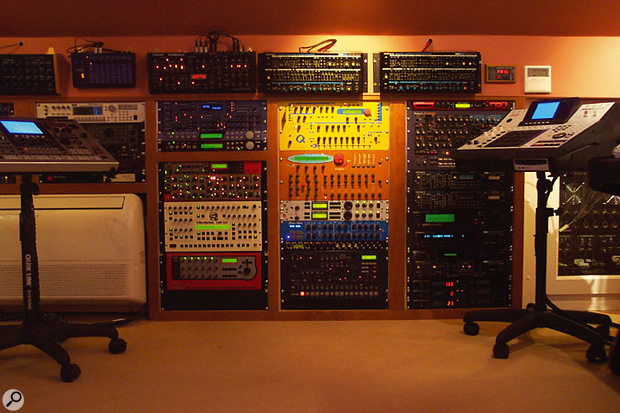 Part of the rack synth area. Above the main racks, some gear is now bolted to the wall boards to make the most of the available space.Photo: by David Hughes

Only one of the studio's Apple Mac computers (mostly G5s) is dedicated to running soft synths. "I'm not keen on them," says Philip. "In my personal opinion, the only real soft synth is something like the [Soundart] Chameleon or Symbolic Sound's Kyma, running on their Capybara hardware." Philip's Chameleon is currently running a Modulus Electronics Monowave II skin, and he prefers this approach over a software package because it's a dedicated piece of hardware — unlike a PC, which is also trying to run an OS, get email, web browse, and so on — tasks which don't really mix with being a musical instrument. But while Philip doesn't like soft synths in general, he does have one or two favourite musical software applications, one of which is Ableton's Live. "As a groove tool it's superb! I can drag loops out of the Synclavier, drop them into Live and they're stretched to fit. Along the same lines, I've been playing with Melodyne recently and it's another fine tool for creativity."

Looking around the studio, I notice that there isn't much outboard equipment, and I'm surprised by Philip's explanation, given that he's just told me he's not a huge fan of software synths. "We're moving over exclusively to plug-ins for processing. As I mentioned, I've bought the Sony Oxford EQ and I didn't see much point in going from digital to analogue to digital when a software solution is available. Most outboard these days uses a DSP anyway, so I might as well do it in Pro Tools!"

The centrepiece of the studio is the Synclavier. Philip's machine came originally from the BBC film and TV studios in Bristol and so has all of their libraries installed. "It was used on many of the Natural History programmes, such as Life On Earth," says Philip. "This Synclavier also has the entire Lucasfilm library. In total, there's about 30GB of sound data."

The Synclavier is used as a humble MIDI master keyboard most of the time, although recently it has also been used more and more as a sequencing tool, because its sequencer provides a really good way to rough out an idea first before fully arranging it via MIDI with the rest of the studio instruments. 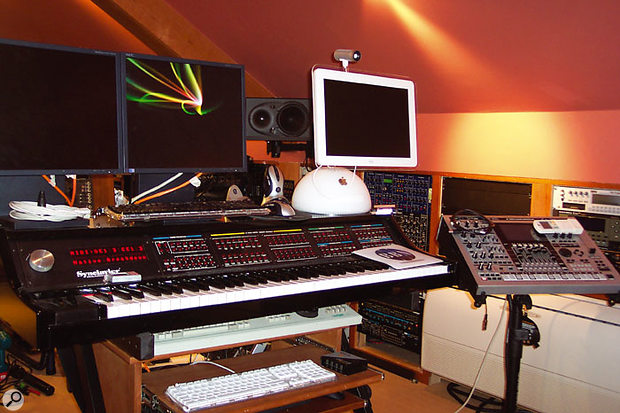 Despite the fact that there's so much vintage gear in here, Philip is keen to emphasise that "this isn't a collection — it's a studio. In a collection, you would probably aim to have one of everything. But in here, for example, there isn't an EDP Wasp. That's because, personally, I don't like the sound of the Wasp. I think you can make better sounds with other devices. Everything is here for its sonic merits, not its rarity. Also, we only install instruments that are fully working, because the studio isn't a sort of storage area or a museum. Everything in the studio must be working, more or less perfectly. I'd love to bring the old Polymoog up but it's just not very reliable."

I asked if Philip's original wish list had changed significantly. "I went to the last Frankfurt Musikmesse, where I fell deeply for the Jomox SunSyn and the Vermona DRM drum synth," says Philip. "Also, I've just found a PPG System 300 modular synthesizer in France, and you have to be very opportunistic. If I don't buy it now I probably won't get the chance to buy one for perhaps another 15 years — so the car's loaded up and I'm off tomorrow! There's another couple of instruments I'm frantically trying to find, such as a Movement Drum Computer — both the Mark I and the Mark II. The Mark II featured user sampling — which is amazing for its time — but I just cannot find one."

Open to the Public?

"I designed the studio for my own use and pleasure," says Philip. "I hadn't really thought that anyone would want to use it on a commercial basis." However, word has apparently spread and Philip has recently received a number of requests from musicians keen to use his studio.

"I was blown away when people said it was pretty amazing and it should be a facility open to musicians looking for a wide sound palette," says Philip. "Now we're talking to musicians who want to come up and use the studio commercially. We're refining some guidelines about how it might be used but in general I'm really excited about the prospect."