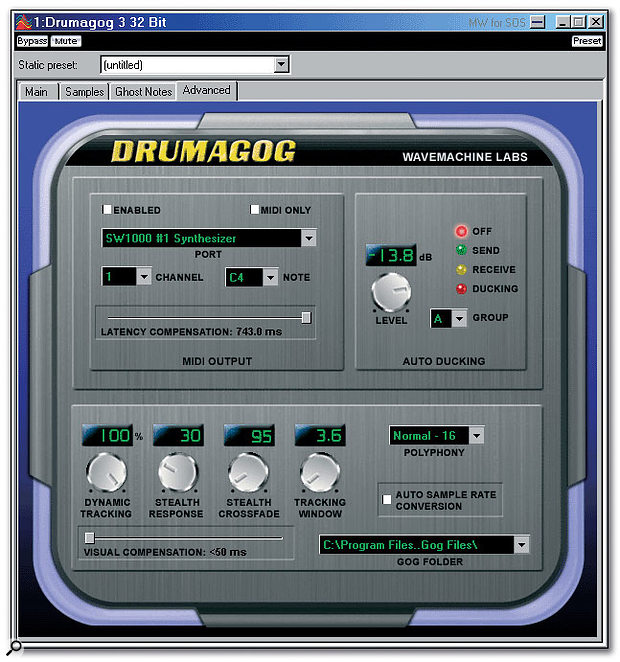 And On Lead Wardrobe...

I found David Greeves' reply to the question 'What can I use to trigger drums?' [Q&A, SOS September 2004] really interesting. I also find that the rhythms I play with my hands on the side of the lift in our flats, or on the wardrobe more exciting than the ones I program in drum machines. There is another way of transforming these rhythms into drum samples without MIDI equipment which wasn't mentioned, although it may be slightly more time-consuming.

Play the rhythm on your knees, desk or even sing, human beat-box style, and record it with a microphone — the standard of the recording is not that important. Then put the recording into an audio editor and place markers at the beginning of the attacks. I do this manually in Prosoniq's Sonicworx, but I understand it can be done automatically in Propellerhead Recycle or Bitshift Phatmatik Pro. Drum samples can then be pasted in at the markers, and a blank audio file, with just the markers, can be saved as a template. If the rhythms are well recorded, these could even be processed and used as a percussion loop.

This method makes it easy to convert speech rhythms into musical loops, as well as taking the groove or feel from other recordings. In fact, any recording can become a potential rhythm template, even random sounds such as throwing a can down the stairs.

News Editor David Greeves replies: Your solution to the problem of how to turn spontaneous, ad hoc drumming into MIDI data is an interesting and direct one, and certainly sounds like it could throw up some unusual rhythms. While the reader who posed the question that appeared in the September issue was looking for a MIDI controller that would allow him the same freedom as he had when bashing out rhythms on his knees, you've chosen to input audio rather than MIDI data and then 'convert' it by hand.

As you say, both Recycle and Phatmatik Pro , and, indeed, Zero-X's Beat Quantizer, can be used to detect hit points automatically, and many sequencer packages have similar tools built in — Pro Tools' Beat Detective, for example. At best, however, these utilities will only leave you with a series of hit points. You'll still have to set the velocity and duration (if required) and the note or sample to be triggered by each hit manually.

One bit of software that will track the level, as well as the timing, of incoming audio is WaveMachine Labs' Drumagog (pictured), a Direct X plug-in designed for replacing recorded drum parts with samples, reviewed back in SOS February 2003. A pre-trigger band-pass filter means that different frequencies in the audio signal can be used to trigger different sounds, and the Pro version has a MIDI output.

However, if you're not a PC user, this avenue is closed to you. But your way of doing things, though time-consuming, gives you plenty of flexibility and, ultimately, gets the job done!

I'm considering buying a Line 6 Pod XT. I read the review you wrote a while back and found it informative and helpful — some of the descriptions of how it worked were more enlightening than the Line 6 manual I downloaded! I was wondering if you would consider writing a review on the firmware updates that Line 6 are offering. Is the Pod XT now a significantly different product from the one you reviewed? It would seem that firmware updates are something we're going to see more of in the future.

News Editor David Greeves replies: As you note, software and firmware updates are becoming more and more common as manufacturers seek to add extra value to their products, which is great news for us consumers. Indeed, it's almost reached a point where any manufacturer who doesn't promise free updates and downloadable sounds and templates is putting themselves at a disadvantage! As chance would have it, the new features in the Pod XT's version 2.0 software are discussed in this month's News section, and your letter also coincides with the review of a major software update to the Voyager synth (see page 90). We try and review as much new gear each month as we possibly can, but even in a mag the size of SOS, it's impossible to fit a review of every upgrade in, so we tend to wait, as with the Voyager, until the upgrades have made a huge difference to the product before we re-review something.

In this case, the Pod XT's version 2.0 software tweaks the unit's existing amp and effects models, adds some new ones and increases the available preset memory. However, the device's core features and functionality are essentially the same as the model we originally reviewed. 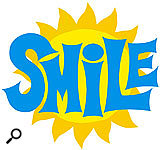 Over the years I have been reading Sound On Sound, it seems to get better as the equipment reviewed gets better. The reason I'm writing is to say how amazed I was with the Brian Wilson SMiLE article [SOS October 2004]. This is a once-in-a-lifetime album that might never have became a reality, and there to tell the world how it was done was Sound On Sound. Brilliant!

Managing Editor Matt Bell replies: Thanks for your kind comments about the feature, Peter, and thanks also to all the other SOS readers who commented on it. SMiLE is certainly unlike any other record I can think of; as well as being a milestone musical and production achievement, no other album in the history of popular music, as far as I know, has ever been completed by the original composers after an interruption of nearly 40 years. During that time, the reputation surrounding the music ensured that much of what was recorded was extensively bootlegged, and because there wasn't a completed version authorised by Brian Wilson until this year, many fans have spent years trying to 'solve the puzzle', and put the bootlegged pieces together in an order that made musical sense — the Internet is littered with home-made SMiLE mixes. The more you investigate the album, the more interesting layers like this you find regarding production techniques, compositional, lyrical and thematic innovation, and simply fascinating music. If you'd like to know more, check out www.thesmileshop.net.