DAW For iPad By Bill Lacey 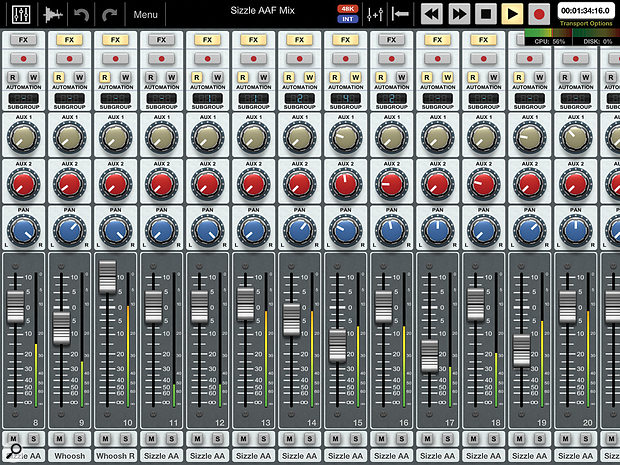 Auria's Mix view. Unlike the Edit view, it can be rotated to portrait orientation, to give long-throw faders.

WaveMachine Labs Auria is the first truly professional multitrack recording app to hit the App Store. Priced at a mere fraction of the cost of a desktop DAW, Auria realises the promise of portable recording and mixing with the iPad. For an initial release, the feature set is staggering: 48 tracks of simultaneous playback (stereo or mono), 24 simultaneous tracks for recording (with an appropriate USB interface and Apple Camera Connection Kit), sample rates between 44.1kHz and 96kHz, 64-bit, double-precision, floating-point mix engine, automation, video, AAF import and export, convolution reverb, optional M/S EQ... Wow!

If you're familiar with virtually any modern DAW you'll be able to start working immediately with Auria. To make the most of its potential, you'll need to invest in a supported audio interface (a list is available on the Auria web site). I used a Focusrite Scarlett 18i6 for my testing.

The basic Auria interface consists of two windows: Mix and Edit. While the Edit window can only be used in landscape orientation, the Mix window can be flipped vertically to give you long-throw faders in portrait view. There are icons across the top of the screen to allow quick selection of either window, followed by Undo/Redo symbols and then Menus, which change depending on whether you're in Mix or Edit view. The primary Menu contains the expected project settings — New, Load, Save — with the added feature that you can save a project directly to DropBox. It's here that you also Add Tracks, Mixdown (bounce to disk), and set various preferences. You'll also find AAF Import/Export here. This is all pretty impressive for a Version 1 iPad app. The AAF file format is the best way to get previously recorded sessions from your DAW into Auria. It's especially useful to have when you need to bring in printed virtual instrument or Midi tracks, and of course you may want to export your Auria session and re-import it back into your DAW for final tweaks. AAF (and video) files are accessed via the app window in iTunes.

The Edit view features two additional menus: Edit and Process. Most standard editing features that you would expect of a fully specified DAW are present. Editing audio is accomplished with gestures consisting of pinches, flicks and taps. Anyone with modest experience with an iPad should get used to it quickly, although some gestures can be a little tricky at first. Users can trim, fade and move audio files with one finger. Additional features such as separate, duplicate, cut, copy and paste typically require a tap or two and an Edit menu item. A grid is available to restrain audio to various scales to aid editing, along with a Multi-Select Tool for selecting multiple objects to edit. 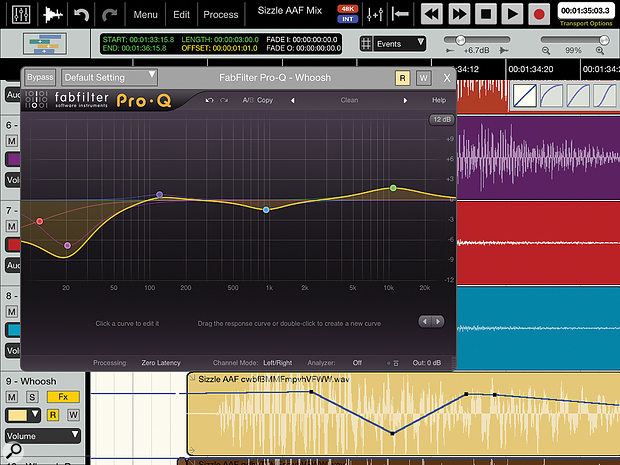 The Mixer has eight subgroups, each with its own dedicated Master Strip featuring EQ, bus compressor and limiter. A helpful output meter displays both Peak and RMS level. Touch Mode automation allows users to control volume, pan, send levels and all plug-in parameters, while in the Edit window users can manually draw automation data. Bundled plug-ins include a Channel Strip from PSP — offering an expander/gate, compressor and EQ — a PSP stereo delay and chorus, and two flavours of reverb (including convolution). Additional plug-ins are available for in-app purchase, to be used as insert effects in the Channel Strip, including the impressive-sounding Pro-Q from FabFilter (which supports M/S EQ), PSP's MicroWarmer and Echo, the THM guitar rig from OverLoud, and WaveMachine Labs' own Drumagog 5. There are also impulse response packs for purchase from MoReVoX. Finally, Video Import is available as an optional feature. The cost of all of these plug-ins will more than double your initial investment, but they add worthwhile enhancement and are well worth considering. Hopefully more plug-in developers will come aboard. Keep in mind that, as this is a 'native' DAW, there is only so much processing power to go around, and you need to manage your overhead just as you would on a desktop computer. Fortunately, Auria has a Freeze button in the Channel Strip to help you do this. There is also a helpful monitor in the Mix window to keep tabs on CPU usage, memory and disk space.

Auria supports two iPad-specific protocols called AuriaLink and WIST. AuriaLink allows ambitious users to sync two iPads running Auria for massive sessions (a good reason to hang on to an old iPad when upgrading to a new model). WIST is a Korg protocol allowing two compatible apps to sync over Bluetooth, with one the master and the other the slave.

The fact that you can — if you desire — engage in serious professional recording, editing and mixing away from your studio on a small tablet-sized device that costs a fraction of the price of a desktop or laptop system is something to be very excited about.

For the most part, my testing with Auria has yielded satisfying results. There are a few bugs that need to be addressed, but updates are coming all the time and Auria is already up to version 1.02 after just a month. WaveMachine Labs have plans to add to the existing feature set, and a booming online community of users is amassing a wish-list to spur them on. To some extent, Auria is limited by what the iPad will allow it to do, but as the iPad's specs no doubt improve, Auria is sure to take advantage of it.

I conducted a few stress tests to see how far I could push things. Forty-eight tracks of audio with the Channel Strip enabled on each track pushed my iPad 3 CPU into the 90-percent range. I then created 48 real-time fades of varying lengths that overlapped, which caused the Disk meter to jump to over 90 percent as well. A few additional Master Strips engaged on the subgroups caused the CPU meter to exceed 95 percent, inducing Auria to beg me to reduce the number of active plug-ins or freeze tracks. This was expected, and turning off some effects or freezing tracks improved things immediately. Considering the amount of great music that has been created over time on four tracks or less, Auria seems fit to satisfy most users' demands. Earlier iPad models will get less mileage, of course (iPad 1 users will only see 24 tracks of playback, four subgroups and no 96kHz sample-rate support), so adjust expectations proportionally.

The fact that you can — if you desire — engage in serious professional recording, editing and mixing away from your studio on a small tablet-sized device that costs a fraction of the price of a desktop or laptop system is something to be very excited about. I don't think that most of us will be selling off our primary DAWs anytime soon, but things have just got a lot cheaper, easier and more fun with the introduction of Auria.