With the advent of Lion and Mountain Lion, the way we save and manage documents is changing. But what does this mean for studio musicians?

Ever since OS 10.7 Lion was introduced last year, some Mac applications — mostly 'productivity' apps such as Pages, Numbers and Preview — have been sporting new File-menu commands. 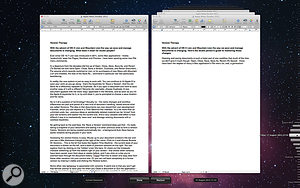 OS 10.7 and 10.8's Versions feature is like Undo on steroids!In a departure from the decades-old line-up of Open, Close, Save, Save As, and Revert (To Saved), we now have Open, Close, Save a Version, Duplicate, and Revert Document. For anyone who's recently switched to Lion, or for purchasers of new Macs with Mountain Lion pre-installed, the loss of the Save As command, in particular, can feel bewildering.

In reality, this already quite mature system is just as easy to work with. You can continue to hit Apple-S to save your work as you go along — the keystroke for 'Save a Version' — and the old Save As is effectively replaced by Duplicate. So if you open a document and want to save another copy of it with a different file name (for example), choose Duplicate. A new document appears with the word 'copy' appended in the file name, and as soon as you hit the Apple-S keystroke for it, or try to close it, you're prompted to choose a save location and file name.

So is it all a question of terminology? Actually, no. The name changes and workflow differences are part and parcel of a new kind of document handling, based around what are called Versions. The idea is that documents can now record their own development histories, which you can explore in a Time Machine-like interface. It's a lot more than an unlimited undo, too. Previous ideas or accidentally deleted material can be 'mined' from your old versions and copied into the current one. And a very valuable side-effect is how difficult it now is to inadvertently 'save over' and damage existing documents with a careless keystroke.

So, getting back to the coalface, the 'Save A Version' command does just that: it's really taking a snapshot of your document and adding it to other previous ones to form a version history. Versions are being created automatically, too; a background Auto Save feature saves versions during pauses in your work.

Accessing the version history is easy. Mouse up to your document window's title bar and you see a little disclosure triangle to the right of the name. Click on it and choose Browse All Versions. This is the bit that looks like Apple's Time Machine: the current state of your document is shown on the left, and a stack of previous versions on the right. You can explore them by clicking on the 'hidden' ones' title bars. Or check out the timescale indicator stretching up from the bottom right of your screen. That shows when versions have been saved, even from days or weeks before, and if you click on a bar, you're zoomed back through the document history. Feel free to select and copy data from these older versions into your current one, or you can roll back completely to a former version by making it visible and clicking the Restore button.

Some version's features are controlled via a new title-bar pop-up menu.

Now, this version business is all very well, but what has it got to do with us music software users? True, most DAWs haven't yet implemented version functionality and the associated Auto Save support, and that includes Apple's own Logic 9 and GarageBand 11. But surely, in the Mountain Lion era, it must be on the horizon. PreSonus's Studio One 2 already has its own system for saving and restoring versions, albeit as separate files, and without the funky OS-supported features. I notice, however, that Audiofile Engineering's new Triumph audio editing application (which replaces their highly regarded Wave Editor) does fully support Auto Save and Versions. If that can, then we can expect more and more music and audio software to do so too. Versions may be a feature that's dedicated to preserving  the past, but it really does represent the future...