A no‑expense‑spared makeover of a Hollywood house naturally requires a top‑quality home recording studio — especially if putting it together can help raise $7.5 million for charities...

This year's Esquire House commands an amazing view over LA.

Man at His Best” is not only Esquire magazine's tagline, but the driving force behind each of the eight iterations of their Signature Space. Each year, Esquire gathers leading designers to transform a docile domicile via the ultimate modern luxury makeover. This ongoing exercise in highly designed masculine home spaces has rotated between New York and Los Angeles each Autumn since its inception in 2003. Esquire VP/Group Publisher Kevin O'Malley explains it as fulfilling his advertisers' need to create "relevant and innovative new consumer touchpoints for their brands”; it's also a showcase for the magazine's own Esquire Home line of home furnishings and accessories.

Prior to 2009, the Esquire houses included cool media rooms and gadgets, but it was Esquire's pal from past charity initiatives Tyler Barth, marketing director of Blue Microphones, who suggested the idea of the Ultimate Home Recording Studio. "There was something missing because if the Ultimate Bachelor isn't a rock star, he must be friends with some. Why not have a cutting‑edge recording studio available to him and his friends at all times in the comfort of his own home?”

Before you write all this off as another vulgar expression of decadent excess, you should know that Esquire House is virtually an all‑volunteer effort, and has raised $7.5 million for charities. For a brief season, the House becomes the Ultimate Red Carpet Fundraising Machine, with Oxfam, Faster Cures, City of Hope, International Medical Corps, and Oceana as the beneficiaries. Advertisers and Esquire front the costs for all the parties, leaving all profits from event ticket revenue, silent auction, and other methods to go directly to the charities. On top of the actual dollars, images from celebs strolling in across the red carpet simultaneously raise tons of awareness. The $18 million required for the ultimate home makeover comes entirely from advertisers and sponsors. 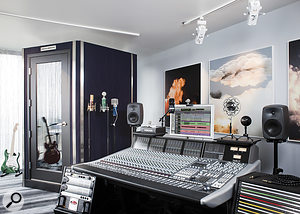 Central to the Ultimate Home Studio are an SSL Duality console and a custom vocal booth from Vocalbooth.com.

'Esquire House 10' began with a hillside home owned by Barry and Lea Porter and possessing a 'world‑is‑my‑oyster' view, but with a dated design. The house had seen five major renovations since it was built in the late '60s including, at one point, a real moat around the property. According to lead designer and architectural director Elaine Culotti, "There were no rookies on this project — only experts.” The truth of this statement is evident in the mostly tasteful, usually decadent rooms and passageways redone from the ground up. There are ostrich, snakeskin and bamboo walls, leather ceilings, cashmere barstools… and that's just Culotti's Hugo Boss room.

Each room had a designer and a sponsor. Lufthansa created a one‑of‑a‑kind, room‑sized flight simulator in which the pilot flies through seamlessly projected images and accelerated‑air blasts by tilting and steering his outstretched arms, as if pretending to be a bird. No item in any room goes haphazardly sponsored. Whether it's a tile or the TV, some company selected it to be a part of the Esquire house.

When it came to locating the studio within the home, the best venue turned out to be the upper floor of a detached 1500‑square‑foot pool house. The recording studio's crisp, spare design and gunmetal palette came from designer Denise Kuriger and matched sponsor Absolut's brand image. In a room packed with instruments and recording gear it's hard to get very 'design‑y', so Kuriger made her mark with $30,000 worth of imported carpet, drapes that allow a refreshingly unusual amount of natural light in, and custom treatment to the Vocalbooth deployed within. Even if you're not a gear head, the real works of art are the instruments and equipment used to capture them.

The first iteration of Esquire's home studio was a functional, but modest desktop studio, yet it drew participation from such musical A‑listers as Snoop Dogg, Will.i.am, Gavin DeGraw, Jay Sean, Ian McCulloch and Kevin Bacon. For 2010, Barth exponentially expanded both the technical and musical aspirations of the Esquire House studio and enlisted key players to pull it off. 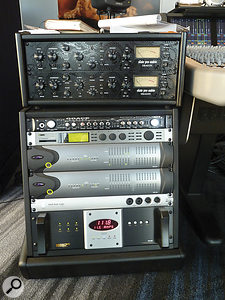 As well as being a Grammy‑nominated engineer, Kevin Becka is also Director of Education at the Conservatory of Recording Arts and Sciences (CRAS) and Technical Editor of Mix magazine. He had previously shared his enthusiasm with Barth for the concept of the Esquire studio, and got the call when Barth wanted to up the ante in the studio. Being a well‑connected guy, Kevin reached out to his many industry contacts to put it together. The first thing he noticed was the acoustics of the space. "The room is small and there's lots of glass that can't be treated. There wasn't latitude to mess with acoustics — it wouldn't be very bachelor‑esque to just slap a piece of foam on the glass.”

To solve the capture end of the acoustics issues, Vocalbooth.com provided a real vocal booth. To make it 'ultimate', Denise Kuriger transformed the very nice base $6395 Diamond Series enclosure with Scottish cashmere, hardwood floor, glass door, and stainless steel trim, bringing the total price to a more fitting $19,000. In today's professional home and travelling studios "sound isolation is often the missing link”, according to Vocalbooth.com's Jennifer Matthey. To solve the other side of acoustic issues — monitoring — Becka turned to Genelec, for digitally managed speakers that can adapt their response to the acoustic environment. "The Genelecs really cleaned up the sound of the room and made it workable.” 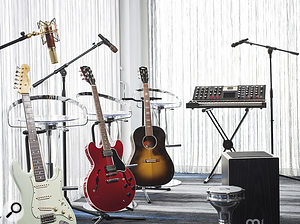 Both of America's iconic guitar manufacturers are well represented in the Ultimate Home Studio, as are Moog synths and Blue microphones.

At many turns, Becka made sure to honour the design aesthetic, approaching companies who make sure their products look as good as they sound. Blue microphones thus adorn the space equally as artwork and as tools to capture the essential performances. Becka approached Solid State Logic with the idea of installing a compact AWS 900 console, but SSL decided to fit right in to the Man‑At‑His‑Best theme by providing a $250k 24‑channel Duality console instead. Once word got out on the Duality, the other studio sponsors jumped right on board. Avid delivered a Pro Tools HD3 system, Mac and monitor, and the first HD I/Os in North America. Steven Slate brought his acclaimed Dragon processors. Waves supplied plug‑ins, Whirlwind the panels and bays, Monster the wiring, TC the reverb, while Grace and Dre covered the headphones. Of course, the majority of it was supplied in boxes, so Dave Knauer of Audio Perception, Los Angeles, did all the integration on a pro bono basis. And of course it wouldn't be much of a studio without a good engineer at the helm, in the person of CRAS graduate Andrew Monheim.

"There's a grey factor as far as events go,” explains Becka. "John Legend drops in... Macy Gray uses the studio as a green room... Somebody shows up and says, 'Can you do this?' The answer has to be 'Yes' and it has to be easy.” All in all, from the console, to the mic selection, to the wiring and integration and the outboard, the studio can roll with that workflow.

Advertisers As Patrons, Musicians As Beneficiaries 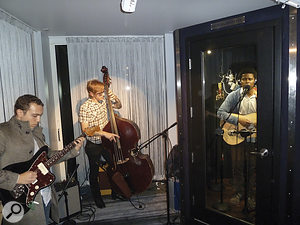 As well as benefiting charities and sponsors, the Ultimate Home Studio also provides an opportunity for aspiring musicians.

The thing that gets Tyler Barth fired up, however, is what a facility like the Ultimate Bachelor Pad Studio can do for emerging artists. By Tyler's invitation, rising stars come to the studio to record for free. "The studio is a wonderful platform to be creative, collaborative – no strings attached. Capture audio – I've got my team constantly videotaping up there. Identifying an artist before they explode, giving them an opportunity to go in and record a track they've never recorded and take the tracks home with them at no cost. They get inspired here by the environment. I have 100 artists on the list to come up to the house and record. No strings attached. Blue Microphones has its own podcast and the artist keeps their publishing.”

Esquire wins because they're reaching their readership and target communities via new channels, including their new brand of home furnishings. The advertisers win through their associations with charities, top designers, and celebrities. The designers win for the exposure and attachment to good causes. In the studio, Blue, Vocalbooth, SSL, Audio Perception, and all the other manufacturers win for the same reason. Finally, Tyler Barth was clever enough to turn all this opportunistic philanthropy into a win for poor musicians, a kind of 21st Century patronage system.

There's been a lot of talk since the 'collapse of the music business as we know it' about new ways for artists to get paid. Advertisers have generally been integral to most proposed equations. From ostrich‑skin walls, to a killer donation by SSL, to a long list of very talented, very generous experts, the Ultimate Bachelor Pad turns out to be much more than an expression of opulence; it's an opportunity to help both charities and musicians.