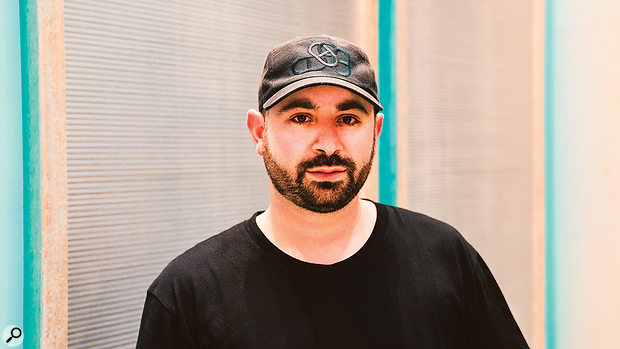 Louis Bell's unique perspective on songwriting and production has brought massive success with acts such as Post Malone, Jess Glynne and Selena Gomez.

"The analogy I like to make is this: the artist is driving down the street, and I am making the road for them. The goal is to take them to where they want to go. Once they are there, you can fix all the details. The road I make doesn't have to be the nicest road, it just needs to get them from point A to point B. You can always go back and fill the potholes in, repaint the lines, whatever is needed. But as you're building the road, the artist needs to be able to see where he or she is going, ie. his or her vision. And artists who do not produce their own stuff rely heavily on the producer's vision. By contrast, someone like Post [Malone] also produces, knows the lingo and can say things like, 'Let's try a different 808 sound.' When we work together, we get things done very quickly."

Speaking is Louis Bell, arguably the most successful producer working in the music industry today. He's been at the top for only three years, and during that time his achievements include eight tracks on Post Malone's debut album Stoney (2016), incorporating the big hit 'Congratulations', and all tracks on Malone's mega-selling Beerbongs & Bentleys (2019), including the super hits 'Rockstar', 'Psycho' and 'Better Now'. Bell's impressive track record also contains big hits by Camila Cabello, Selena Gomez, Lorde, Halsey, Cardi B, 5 Seconds Of Summer, Khalid, Jess Glynne, Rita Ora and many more.

Bell has some striking ways of describing what he does. For example, when discussing songwriting, he says, "Songs are like tornadoes. They come out of nowhere and they do some damage sometimes, and you don't really know when they come around. Songs take everything that is around them, spin it around, and turn that into a storm, and it affects people. But when you are in the eye of the storm, you don't even notice anything is going on. So you're creating this song, and after the dust settles, you have a look at what you have created and you go: 'What did I just do? Was it something special, or was I just destroying stuff?'

"I can remember exactly where I was and what I felt and who I was with for every song that I have ever made. I think that says a lot. The song becomes like a wormhole in time that allows you to always go back to that moment. If you do it right, you have created a personal little synapse network for yourself which allows you to revisit things and get nostalgic and tap into a certain emotion. It makes you a more formidable creator, and it helps in getting artists excited about things."

The many tornadoes that Bell has unleashed on the world over the last three years are all the more remarkable because before late 2016 he was a virtual unknown, despite having been in the business for close to two decades. Bell was born in 1982, and by the time major success arrived he was 34, and, in his own words, "over-qualified. I had built up my skill set for more than 10 years, by which stage I was very prepared and ready to wear a bunch of hats. It just takes one song to put your head above water. While it's under water, nobody knows you exist, but once it's above water, everybody will see you, and will go: 'Hey, who is this guy? Let's get him on board!'"

The hats that Louis Bell has been wearing include those of songwriter, vocal producer, engineer, mixer, and producer, and the song that put him above water was DJ Snake's 'Let Me Love You', which features vocals by Justin Bieber. Released in August 2016, it was a worldwide hit, reaching number one in more than a dozen countries. "The song was a massive success, and I was pretty happy about that," Bell recalls. "I started working with Post Malone immediately afterwards, and reconnected with Justin for Post's song 'Deja Vu'."

Louis Bell: "Songs are like tornadoes. They come out of nowhere and they do some damage sometimes, and you don't really know when they come around.

Bell grew up in Boston, and started piano lessons when he was 13. His mother drew, played guitar, and was a computer teacher who filled the house with PCs. All these influences combined in her teenage son starting to make music in Fruity Loops. "I grew up liking hip-hop, acts like Eminem, DMX, 2Pac, Biggie and Mobb Deep, because it was status-quo-challenging music, which to me was what rock was about when it first come out. I felt like there were no rules in hip-hop, no formulas, they really were not afraid of what anybody thought, and I loved that. I love the lyrics and the rhythms, so hip-hop was always in my blood, before I ever did pop music. Once rap started to be a thing where you had to be able to sing as well, like 50 Cent and Drake, it took it to a meteoric level and changed everything with regards to what a rapper is expected to do. That was intriguing to me, because while I always loved hip-hop, it gave me the chance to infuse it with all my pop instincts as well. Plus I have a lot of rock instincts. I also grew up listening to Aerosmith, Metallica, Pearl Jam, Nirvana and the Red Hot Chili Peppers."

In addition, he says, "Learning to play piano was massively important. When I was 13, it gave me the muscle memory to understand chords and scales intuitively. When I hear something in my head, I can just sit down and play it, and also know all the different chord progressions that are possible. I took piano lessons for a few years, and they got me to a certain point, and then, when I started producing six or seven years later, that skill set really kicked into place.

"I was 19 when I started producing. I wish I'd started at 15, but the technology did not exist at the time. Back in the day you needed a board, and you needed a keyboard, but the prices of keyboards and sounds were a lot more expensive in those days. I eventually started creating beats in Fruity Loops, and I still do today. The first keyboard I got was a Roland Fantom X6, and I could play the ideas in my head on it, with different sounds, and layer them. I also have perfect pitch, so when I hear something in my head, I immediately know what key it is in, and that helps with harmonising."

Bell continued his musical development in Boston by teaching himself more about music theory, working with Fruity Loops, rapping, and eventually opening his own studio. He worked with many hip-hop artists, one of them a rapper called Mike Stud, who invited him to Los Angeles in 2013. By this point Bell was, as he said earlier, "over-qualified" and ready for the big time, and after he arrived in LA it did not take long for major things to happen. Bell met a musician and producer called Andrew Wyatt, who became a friend, and who knew Justin Bieber. Another LA friend knew DJ Snake, and both connections led to Bell co-writing 'Let Me Love You'. Soon after arriving in LA, Bell also signed with manager Austin Rosen, CEO/founder of Electric Feel Management, who opened many doors for him, and connected him with Post Malone. Rosen also, quite literally, opened the door to Electric Feel Studios, where Bell has worked since late 2013. 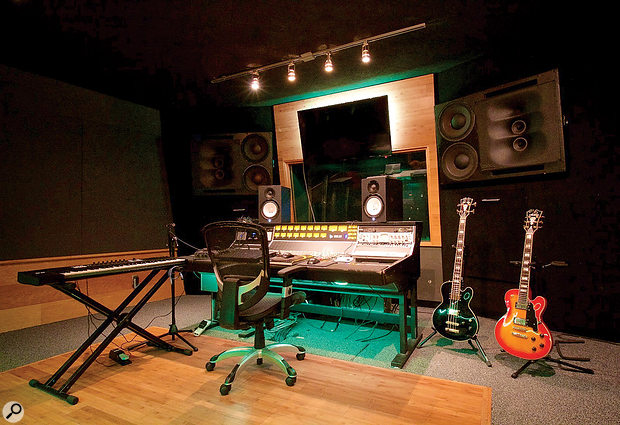 Louis Bell has made his home from home at LA's Electric Feel Studios, though he rarely uses the studio's console or impressive selection of outboard.

Fruity Loops, aka FL Studio, remains at the heart of Bell's setup at Electric Feel. This is because, says Bell, "the way it is set up means that it is very fluid with regards to switching sounds and it not taking up too much CPU power. The program allows me to have many options already dialled in, which means that I can just start things and be super-creative. Because everything is blending well and sounding great, I don't have to keep going in and EQ'ing things, and so on. Everything is ready to go, it's like plug and play. This means that I can think about the melody and the chords and the song, rather than whether the bass is clashing with something else. I'm simply not thinking of that kind of stuff. I do that later in Pro Tools. Creating is like wet cement, you have to keep it moving. If you wait too long the cement starts to dry, and the next thing you know, you've hit a block and it's not shaped the way you want it."

Unusually, Bell still works on a Windows machine. "I don't know anybody in LA who uses Pro Tools on a PC to this day. Using Pro Tools on a PC makes me feel unique. And sometimes using an unusual tool will get you creatively different results. It kind of gave me my own little angle, and sound.

"I have an Asus PC running both Fruity Loops and Pro Tools, and a UAD Apollo Twin and Quad expander, and that's it. There's an API board in this room with Apogee outboard and so on, but those things are occasionally used by others, and I don't really use any of that stuff. It's pretty much me and my laptop here, and a Native Instruments S61 Komplete Kontrol keyboard. I have always used minimal equipment. I've had the Apollo Twin since 2014, and before that I had the [Avid] MBox 3, the MBox, and as far back as 2003-06, Pro Tools 002 Rack.

"My vocal mic is a Sony C800, which I love. It has a lot of high end, but I can EQ that out if I need to. I have homed in on certain frequencies that can be troublesome at times, and with every artist that I work with and that uses that microphone I am able to get the right sound and dynamics. Post Malone and Swae Lee used that mic for 'Sunflower', Camile Cabello sang 'Havana' on it. Every artist feels they have their favourite mic, and they may have good reason, but if I don't get the right sound from the Neumann or whatever they want to use, I'll ask them to at least try the Sony. I use the in-wall Genelec monitors in this studio, which are my preferred monitors, but they are no longer made. I am looking for some smaller monitors for the home setup which I am building at the moment. I want to be able to be create at home, to have more advanced creativity going on in my house. It'll be a more relaxed setting than here, because in the studio there's always this urgency, as you worry about time and efficiency."