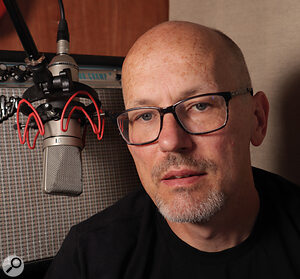 Sam Inglis, SOS Editor In Chief.When you’ve been around for a while, it’s easy to become cynical about new music. Aren’t today’s guitar bands just bad copies of such and such a group from the late ’70s? How can anyone possibly prefer trap or drill to the golden age of hip‑hop? Surely all those trendy composers with vaguely Scandinavian names are simply reinventing minimalism?

It’s a matter of perspective, but one quality that marks out the really great producers and engineers I’ve met is that they don’t give in to this cynicism. They’re still genuinely, even naïvely excited about new music, and they’re always focused on the positive.

At the same time, though, even the most optimistic fan of new music would have to admit that novelty is rare in a world where we seem to have heard everything before. It’s hard to imagine a new release blowing people’s minds in the same way as Kraftwerk, or ‘Strawberry Fields Forever’, or early rap music — or, for that matter, Wagner or The Rite Of Spring. Is it still possible to give listeners a genuinely new experience? And if so, how?

If the answer to the first question is yes, the second may well involve immersive audio. This month’s cover star Jean‑Michel Jarre is not only convinced that spatial audio is the future, but determined to treat it as an entirely new medium. And he’s absolutely right to do so. If Atmos and other 3D formats are going to usurp stereo, it won’t be by regurgitating classic albums with the backing vocals panned to random locations. If the best that we can do with immersive audio is to make a better kind of stereo, it will fail. Spatial audio needs to offer more than just an iterative improvement — and if that’s going to happen, producers and musicians are the people who need to make it happen.

If the best that we can do with immersive audio is to make a better kind of stereo, it will fail.

Cynics will argue that failure is inevitable. But is that not just a failure of the imagination? A new format is only as good as the content that’s created for it. We are the content creators, and the great content creators, like Jarre, are excited rather than world‑weary about the possibilities of Atmos and Sony 360.

Before we can explore these possibilities, though, we need an immersive‑capable studio. So, elsewhere in this issue, I’ve set out to discover what’s involved in creating one. [See 'Setting Up An Atmos Mixing Room'] As the cynics will tell you, the cost of entry to Atmos can be high, but that goes for everything associated with studios. We’re happy to spend lots of money on synths, guitars and studio hardware, even if it makes only a marginal difference. So what price a medium that offers something genuinely new?