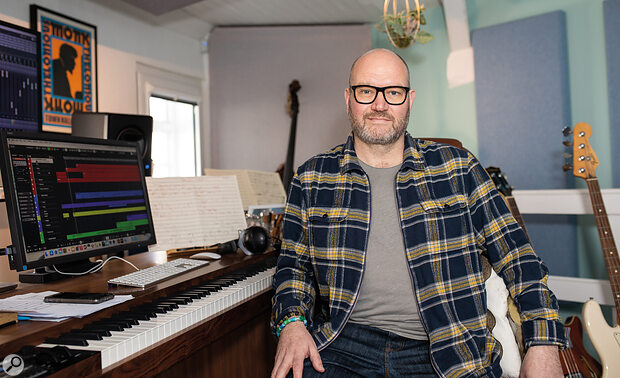 Paul Englishby at his Brighton studio.

Film composer, theatre composer, TV composer, ballet composer... Why be one when you can be them all?

“I love to collaborate,” says Paul Englishby, the Emmy‑winning British composer whose work includes music for theatre, TV, dance and films. “And one thing you learn is not to be precious,” he adds. “In the theatre, and particularly TV, you’ve got to be really thick‑skinned about losing stuff. I don’t ever get offended if somebody wants to suggest changes.”

In fact, Paul explains, nothing is ever really lost completely. “Not that I have a bottom drawer where things cut from one show end up somewhere else. I don’t have that. But whenever you write — a template, an idea, a turn of phrase, whatever it might be — you’ve learned something in the process. It’s all good.”

He recalls pre‑production work on his score for A Midsummer Night’s Dream at the Royal Shakespeare Company, back in 2005, when his music kept getting cut. “So my friend Mike Ashcroft, the movement director, brought in a manual paper shredder for me, put it on a desk, and then each time a cue was cut, I’d really ostentatiously walk up and shred that part in front of everyone — to make the point of how much of this was going in the can. But I really don’t mind,” he laughs. “It’s a fact of a composer’s life.”

Paul has worked on more than 20 productions at the RSC through his career, and he was back there for his most recent theatre job, composing for Rebellion and Wars Of The Roses, a pair of plays based on Henry VI that opened in April 2022 to wide critical praise.

“To their massive credit, the RSC always commission scores, and they always have live music, for every show,” he says. “They must be one of the biggest commissioners of music in the country. And from a composer’s point of view, it’s wonderful, because the music can be quite supple around what is really a moving target, in the theatre, as opposed to film or TV. It’s never the same. So, for example, you can play underscore and let it move at the pace it needs to at that performance.”

The wide scope of music that Paul is asked to compose suits him well. “I guess I’ve always felt that a composer should be somebody who writes music wherever music is required. So rather than be ‘a TV composer’ or ‘a theatre composer’, I’m really lucky I do a range of things. And that’s what I always wanted to do,” the 52‑year‑old remembers.

“Starting as a teenager, I would get involved in everything and anything. And I think I’ve done pretty much every job there is, from audition piano to playing for ballet, MD’ing shows, gigging to session music, and plenty in between. So I could always find work in my formative years while I was trying to establish myself as a composer.”

An early break came in 1995, when the documentary maker Mike Grigsby commissioned 20‑something Paul to write music for one of a series of half‑hour BBC programmes, Sound On Film. “I had an orchestra in Abbey Road, a budget, and I thought, ‘Ah, this is what it’s gonna be like.’ And it was, oh, 15 or 20 years later until that happened again!”

But it did open a new avenue for Paul. “I picked up a few theatre composing jobs, all the time subsidising my income with playing piano in hotels, doing jazz gigs. I was Associate MD at the National Theatre for a bit. I was stealthily doing everything I could, and along the way I met Will Tuckett, the choreographer. We established a good working relationship and I’ve done lots of shows with him since.”

For a while, Paul also became The Guy To Help Movie Stars Look Like They’re Playing Instruments. How so? While MD’ing at the National, he did a show with the composer Stephen Warbeck, who asked Paul if he’d like to work on a film job he’d just secured. “He said it’s called Captain Corelli’s Mandolin and it’ll mean three months on Kefalonia,” Paul recalls. He said yes. Quickly.

One of his tasks during the shoot on the island, in addition to arranging Greek music and Italian arias, was to be a music teacher to the film’s star, Nicolas Cage. As well as his first love, piano, Paul can put his hand to most stringed instruments. He taught the actor to look as if he were playing the mandolin, an essential part of the film’s story. “It was a bizarre and wonderful job. On one weekend off, Nicolas and I went to Venice in a private jet, so that he could have the gondoliers say his lines, to improve his accent. My hotel room was bigger than my whole flat back in London.”

That led to a job teaching Hugh Grant to look as if he were playing guitar in the film About A Boy. “I’d go round to Hugh’s place to show him the chords to ‘Killing Me Softly’. He’d ring me up out of the blue — I’d be with my friends, I’d say, ‘Oh, it’s Hugh Grant on the phone, sorry.’ Hugh would say he had a bit of time tomorrow, could we have a guitar lesson? Just weird and wonderful! I’m so lucky that music has given me all these chances.”