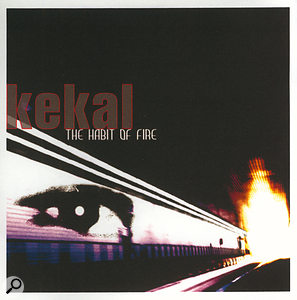 CD Of The Month: Kekal The Habit Of Fire

The Habit Of Fire is apparently the sixth album from Indonesian beat combo Kekal, and features such popular favourites as ‘Worldhate Chronicle’, ‘The Gathering Of Ants’ and ‘Our Urban Industry Runs Monotonously’. The band describe it as “an experimental yet accessible 70–minute epic concept album of urban avant garde metal”, which is pretty much on the money.

So too is the production and engineering, which marries contemporary (and presumably triggered) blast–beat drums with keyboards, vocoders, and a bewildering range of guitar sounds. Respect is due to the mix engineer who made it all fit in two speakers! There’s a breathless, almost ADD feel to proceedings as the band barrel from one idea to the next, borrowing influences from anything and everything. At the same time, though, their tightness and discipline as a unit is impressive, and you can tell that they’ve been playing together for a long time. The adjective ‘progressive’ has been over–used in music, but Kekal have more right to it than most. Sam Inglis 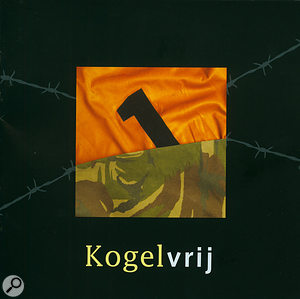 Kogelvrij is a rock opera which explores the suffering of child soldiers in an unnamed African country, and was created by Dutch SOS reader Daan Andriessen and friends as a stage production for their children’s school. I’m not sure whether educationalists have considered the potential of pomp–rock as a medium for conveying the horrors of war to 11–year–olds, but it certainly seems to have captured the enthusiasm of the young singers featured here.

Daan and his fellow musicians have used mainly software instruments to recreate an authentic ’70s sound palette, replete with Hammonds, Mellotrons and Prophets and overlaid with David Gilmouresque guitar solos. The result is a mix with plenty of projection and clarity, but the combination of so many perfectly tuned, perfectly recorded virtual instruments gives the music a slightly artificial, cartoon quality. This is partly because all the individual instruments seem to occupy the entire stereo field, and it might be worth collapsing some of them to mono. All of the tracks on the album also feature prominent synth-pad parts which simply play sustained chords. These are more annoying than atmospheric, and should be first against the wall when the mixing revolution comes. Sam Inglis 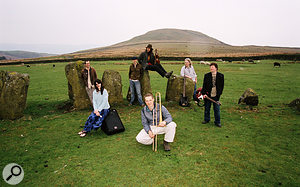 The first track on Sonic Tradition’s album is named ‘Fiddler On The Hoof’, presumably after the similarly titled musical, the film adaptation of which is such a Boxing Day TV staple. However, the only explanation for the naming of the opening number as such is the almost gratuitous use of the Phrygian mode, which is omnipresent in both ‘Fiddler On The Hoof’ and Fiddler On The Roof. Admittedly, there is a section of what sounds like someone tap–dancing in Doc Martens, but surely that’s too tenuous to be considered stimulus for the title. If it is, then why not call it ‘Fiddler On The Boot’?

The second track features both the Phrygian mode and the call to prayer (or at least the first part of it), which is heard in cities across the globe five times a day. (Unfortunately the Muezzin is not credited in the liner notes.) It oozes with oriental charm (must be something in the Cumbrian water), and by the end, echoes the Gypsy Punk trend of bands such as Gogol Bordello, Mahala Raü Banda and Koçani Orkestar that’s currently sweeping the western world.

The rest of the album seems to be a dichotomous mixture of foot–tapping folk (some of it very traditional–sounding, with fiddles, shell–tappers and everything), and either electronica, breakbeat or ska. This isn’t always a bad thing, and the addition of electronic devices to the range of acoustic instruments often makes for refreshing listening. However, at certain points I think someone should have said “hold on, do we really need that farting synth under the trombone solo?” or “do we need that saw wave pulsing under the fiddle?”. Honestly, and you can call me a prude, I’d much rather hear the instruments doing what they’re supposed to do. Chris Mayes–Wright 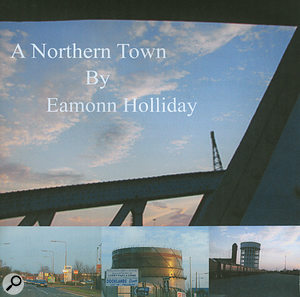 Lots of the demos that arrive at SOS drip with an unhappy desperation to be noticed. Adjectives such as ‘seminal’ and ‘uncategorisable’ pepper press releases, and band photos look like news reports from a gurning competition. So it’s refreshing to encounter a reader like Eamonn Holliday, who cheerfully admits that “I have no pretensions with my music, I do it in large part for my own interest and pleasure”.

A Northern Town is a collection of songs inspired by life in Goole, in East Yorkshire. Anyone who’s been to Goole in East Yorkshire will hardly be surprised to discover that the album is a downbeat affair. Sedate tempos, gloomy synth washes and heavily reverbed guitars are complemented by Eamonn’s likeable, semi–spoken vocals, which recall Chris Rea in places. The overall effect is atmospheric and thoughtful, although there are certainly ways in which the mixes could be improved. Most obviously, Eamonn has a tendency to mix his drum parts way too far back, while his sound palette would benefit from a purge of ’80s cheese, and his acoustic guitar tracks have that tell–tale scratchiness that comes of being DI’d. Sam Inglis 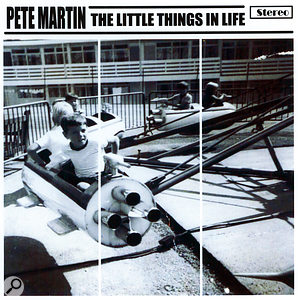 Pete Martin’s album will be sold only through the Internet. That is probably a good thing, because most of it already sounds like a 56k MP3 file. It’s hard to know what has gone wrong, but somehow Pete has reduced perfectly decent drum tracks to an indistinct wash of splashy cymbals and gutless plops. His vocal sound is muddy, and his tasteful guitars get lost in the mush, leaving only an oddly dry Farfisa–style organ poking its head over the parapet.

It’s a shame, because Pete is clearly a very competent singer and arranger, with a confident grasp of pop-song structure and a satisfying ‘more is more’ approach to harmonies. I was going to praise his songwriting, too, until I clocked what sounded like an outrageous lift from XTC’s ‘Senses Working Overtime’ on the second track. Call me a cynic, but that made me suspicious about the instant hummability of some of his other melodies... Sam Inglis 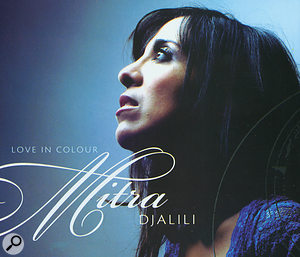 Given the number of demos that cross the threshold of SOS Towers, I’m always surprised by how little mainstream pop we receive. Mitra Djalili and her White Noise production team are definitely targeting that gap with a set of sharp, spiky R&B–influenced tunes. Production–wise, they keep things contemporary with an unrelenting barrage of multitracked percussion, drum loops, Spanish guitar and layered backing vocals. It’s energetic to the point of being exhausting to listen to, which isn’t helped by an overall tonal balance that emphasises the high–mids in an aggressive fashion. Personally I’d have brought the bass and lead vocals up a shade, and made some of the other elements less prominent. And after doing that, I’d have had a nice cup of tea and a lie-down in a darkened room. Sam Inglis 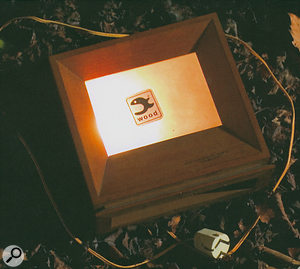 I don’t know how many Dutch readers SOS has, but they are commendably keen to send us their music. Guitarist Wouter Loderichs describes his album as ‘intense’, and it’s hard to argue. His playing and songwriting are rooted in the blues, but have been filtered through some very non–blues influences. The results blend double bass with brutally compressed, often bit–crushed drums, spoken vocals, weird sound effects and guitar playing that is often more about making weird noises than pulling off neat licks.

There are plenty of ideas here, and a lot to admire about the production — Wood certainly doesn’t sound like anything else — but I’m not sure it’s entirely successful. For one thing, the album has been viciously squashed at the mastering stage; it’s loud all right, but gets pretty fatiguing to listen to. More importantly, the sonic innovation on display isn’t matched by Wood’s imagination or creativity as a songwriter. Sam Inglis 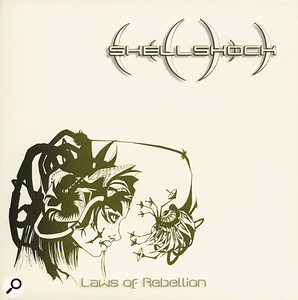 Trying to combine two different genres of music is always a risky endeavour. Get it right, and you can come up with something highly original. Get it wrong, however, and it can end up sounding like a bad mash–up remix.

I can’t blame Shellshock for trying, though. On the face of it, combining drum & bass with heavy metal seems like a perfectly good idea. The two styles certainly have a lot in common — an abrasive edge, prominent drums, lots of energy — but for some reason it just doesn’t gel.

That’s not to say it’s terrible — some of the industrial synth sounds on this CD would be as at home on a Fear Factory album as they would on a modern D&B record (the track ‘Killers’ sounds uncannily like an existing Ram Records tune), and there are moments when the electronic 16th–note percussion and speed–metal guitar riffs really complement each other.

Unfortunately, most of the tracks on this album aren’t that successful. Some of them sound like they started life as perfectly good metal songs, but had the electronic elements added for no purpose other than to stick to the ‘E Metal’ crossover remit. Likewise, in trying to keep up with the heavier side of things, the more electronic tracks lose their groove by being excessively fast and angular.

My guess is that there are two distinct production stages — the live instrumentation and the drum and synth programming — happening one after the other. This would certainly account for the slightly schizophrenic sound of the album as a whole. There’s definitely something to it, but they need to work on making their sound a little more coherent for it to really succeed. Chris Korff 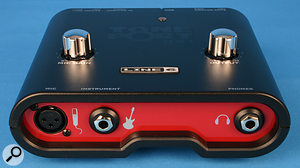 This month's lucky winners are Kekal.