CD Of The Month: The Jamestown Union

Alt-country is one of those underground music scenes that has been building slowly for decades, but still shows little sign of breaking through into the mainstream, at least in the UK. The Jamestown Union's album is a perfect example: effortlessly melodic, full of sweet melancholy and hopelessly in thrall to the likes of Gene Clark, Gram Parsons and Emmylou Harris, it's a sermon that will thrill the converted, but you can't see it being A-listed at Radio One, or quadrupling sales of fringed jackets overnight. It's country all right, but for 'alternative', you could just as well read 'retro'.

Although they're from Brighton, the Jamestown Union's pastiche of '70s West Coast country-rock is flawless. They have the harmony vocals, the dobros and mandolins, the harmonicas and the fiddles; more pedal steel would be nice, but as anyone who's tried to put a British country band together will know, good steel players are like hen's teeth. The album was recorded in trad fashion to analogue tape, which says a lot for this band's musicianship, and I imagine they'd be excellent live. This is the sound of a band doing what they do for the sake of love, not money or fashion. Sam Inglis

Carter are probably sick of being confused with '90s synth-pop ironists Carter The Unstoppable Sex Machine. If so, that's their own fault for choosing a name that was already used by '90s synth-pop ironists Carter The Unstoppable Sex Machine. This new Carter describe their music as a "euphoric wall of electro-rock sound", which is hypey but not far off the mark. Their demo, which was very nicely recorded live in the studio, shows an impressively tight band who, with some careful tweaking, could probably hitch a lift on the passing New Rave bandwagon.

That tweaking should definitely involve purging the rock elements of Carter's sound, especially their cheesy piano vamping and ultra-conventional rock drumming, and building up the electro side of things. The band sound much fresher and more contemporary when the piano gives way to squelchy analogue-style synth riffs, while the guitarist's gritty chords and ambient tremolo washes would be more interesting if they were laid over a less predictable rhythm section. Singer John Green, meanwhile, has a powerful voice, but would communicate the songs much more effectively if he dropped some of his grunge-style affectations and weird mid-Atlantic accent. Sam Inglis

Roger Barker compares the sound of his four-piece rock band to the Chili Peppers, Queens Of The Stone Age, Muse and the Killers. To my ears, barkerhound don't have much in common with any of these acts, but I'm struggling to think of a more appropriate comparison. There's a whole lot more experimentation going on here than in your average RHCP album, and somehow, although barkerhound don't shy away from loud noise, they never quite sound like a hard rock act. Roger's guitar riffing does sometimes recall Matt Bellamy, but there's also a discordant, Andy Gill-like dimension to his playing which I really like.

It's refreshing to hear a band who don't sound like lots of other bands, then, but I'm not convinced that barkerhound have really found a coherent style that works. Their playing is too fussy to really rock out, and they never allow themselves to settle into a groove for long enough to be truly funky. You often get the feeling that too many ideas are fighting for space within a single song, and that goes for the production, too. We get to hear half a dozen different processed guitar sounds before two minutes are up, not to mention unnecessary percussion overdubs and panned backing vocals. The boomy and reverb-laden snare doesn't sound as though it belongs to the same kit as the dry cymbals and hi-hats, while I'd like to hear keyboard player Hazel Stalker really competing with the guitars for the listener's attention; all too often, her tasteful organ-type sounds just get lost in the mix. Most of all, though, I think the band need to find a sharper focus and strip their material down to the bits that really matter. Sam Inglis

Redhouse have had some big gigs supporting bands like Bon Jovi and Towers Of London, and you can see why. They've got the spiky haircuts, the big shades and the moody pouts, not to mention a well-honed sound that combines cartoon punk and hair metal. Clearly, Redhouse want us to think that they're snotty, obnoxious lowlifes, but it's obvious that they're just too well brought-up to fit the mould — I can't imagine the Sex Pistols sending out demos with a stamped addressed envelope for "any feedback you wish to give". It's a sweet thought, and Redhouse's humility is refreshingly different in a world of rock & roll arrogance, but it does seem a bit out of keeping with the image they want to project.

Their music presses the right buttons, and you could be forgiven for thinking you were listening to a lost Motley Crüe album. Each of the three songs clocks in at under three minutes, and the overall impression is a blur of fizzy distorted guitars, frantic drumming and posturing vocals. The mixes are trebly and heavily squashed, to the point of severe distortion in places. A meatier kick drum and tom sound would give the whole thing more guts, and there's a nasty clicking edit in the first song, but in general it's a sound that suits this sort of band better than most. However, there's not much here to make Redhouse stand out from a thousand other rock bands. If they are going to make it big, it'll be through the time-honoured medium of gigging rather than sending out demos like this. Sam Inglis

Twin are Daisy and Hollie Mildenhall, a pop duo from Cornwall. The press release accompanying their demo chronicles plenty of local success, including winning BBC Radio Cornwall's Album Of The Week several times over, and numerous positive reviews in the national (or "up country") press.

Their demo features two songs that are highly polished but a little bland. Both plough the classic pop song furrow of the tragic break-up of a relationship ('waiting for you to tell me / when did you change / when did you stop loving me?'), and are just the sort of inoffensive ballads that could quite realistically enjoy chart success. With a bit of luck, they could even be raking in the royalties for inclusion in the OST to a ghastly film about a single thirty-something woman who falls for a nauseating character played by Hugh Grant.

That probably makes them sound worse than they really are. To be fair, their production is tight, with plenty of commercial glossiness: too much for my taste, but I don't buy Christmas singles. The Corrs-esque vocals suit the style extremely well, and the tracked parts and harmonies are all spot on. (I'm guessing this is one of the benefits of working in the studio with your genetically identical sibling.)

Ultimately, Twin sound just like the sort of pop act I would begrudge for getting far too much radio airplay and dominating the freeview 'Txt Ur Video Code!' music channels for weeks on end. I think it's reasonably safe to assume that that's what they're aiming for, though, and if the Cheeky Girls can do it without so much as a work permit, then I reckon Twin can too. Chris Korff

Enochian Theory are much more than just a band. They are an 'Audio Entity', if we are to believe their press release, which is lovingly presented on aged parchment (well, tea-soaked A4 paper).

Based on the press release alone, you could be forgiven for thinking that these "four individuals who have come together through sheer chance" might comprise a dwarf, an elf and maybe a couple of other mythical creatures on some sort of quest. Well, you'd be wrong, but to get an idea of what they sound like, imagine a Warhammer-based film featuring said mythical creatures, set to a soundtrack of "epic, atmospheric metal".

Have you fallen asleep yet? Because I would have done, had it not been for the chord changes every 10 minutes or so, and the apparent attempt to introduce contrast by playing clean, quiet guitars for the first half of their songs, then loud, distorted guitars for the second. For most rock bands, dynamics like this tend to work quite well. Unfortunately for Enochian Theory, however, all that is likely to happen, should anyone have the patience to make it to the second 'movement' of any of their songs, is that the listener would realise that this band suck harder and louder than they had at first thought.

While they are all competent musicians and their production is of a high standard, the songs really are several times longer than their substance sensibly allows, and I can't help thinking that the market for this music is pretty limited. Mostly to the band members' mates at Games Workshop. Chris Korff

The best CD reviewed each month will win a Line 6 Toneport UX1 recording interface, plus the complete set of expansion model packs and the Gearbox Plug-in feature, giving the winners a comprehensive range of amp and effects combinations to use with their computer recording system. 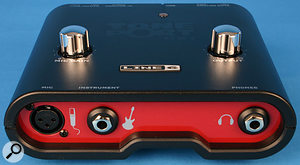 This month's lucky winners are The Jamestown Union.