Nostalgia ain’t what it used to be By Chris Korff

I appreciate the nostalgia people have for tape machines, I really do. There’s something visceral about seeing your music spinning from spool to spool, via a Byzantine system of tension arms, capstans and rollers... and the act of winding and rewinding is itself a very relaxing, almost Zen-like experience. 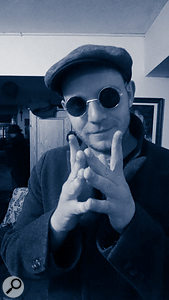 But having dusted off my Fostex Model 80 for this month’s cover feature, and used it in earnest for the first time in a number of years, I can now, emphatically and unequivocally, say this: analogue tape can fuck off. Seriously, let it go the way of mullets, storage heaters and dial-up modems. It has had its day, and trying to get any serious recording done with it nowadays is like insisting on using a steam tractor for farming because it makes your porridge taste better.

Let me explain. When I brought said Fostex into the office, I was certain it would work straight away (it did the last time I used it). But when I powered it up and started testing it, it wouldn’t record. The meters bounced around to the input, but playing the tape back revealed precisely bugger all. Turns out that having a record head caked in oxide is likely to render the device as musically useful as a potato.

With that issue identified, and the heads thoroughly cleaned, I found I could reliably record on a whopping six of its eight tracks — with only a few decibels level drop on even the worst channels. Whoop-dee-doo. To be honest, though, we considered a 75-percent success rate to be pretty good going for a machine of this vintage, and so without further ado we set about recording SMPTE timecode on to track seven.

If only it were that simple. You see, after all the tweaking around to get the tape tracks to record and reproduce at a healthy volume, I’d neglected to switch the Dolby NR on while striping the track. Switching it back on again would have resulted in some high-frequency de-emphasis being applied to the timecode, and since we were dealing with a pretty fragile system already (30-year-old synths being driven by a 30-year-old Atari and plugged into a 30-year-old mixer), I thought it only fair to give our studio a sporting chance, and record the SMPTE again properly.

Except that I couldn’t. Now, not only was nothing coming back from the tape, but nothing was going into it in the first place. The meters remained resolutely still. So I checked the output from the SMPTE generator (which was fine), then I checked the cable between that and the tape input (also fine)... and then I remembered that I’d put the tape guard on while giving the heads a final clean. (This was something of a relief, as by then we’d exhausted pretty much every other avenue for a working tape machine, short of buying some over-priced ‘vintage’ piece of crap off eBay.)

At last, we laid down our 15 minutes of SMPTE timecode (a duration we’d settled upon to give us a little wiggle room in case something went tits-up with the tape). Except that, this time, I noticed that the varispeed control was off its centre detent...

Mercifully, attempt number four proved successful — but by then, the process of synchronising a handful of audio tracks to a handful of MIDI synths had taken us almost an entire day. Can you imagine what the Steinberg support forums would look like if Cubase behaved like this? If channels worked on one day but not the next? Or every time you opened up your projects they had a little less high end than before? Or, when you hit play, your audio ran fine, but your MIDI tracks kept stopping and starting while they waited for some identifiable timecode? Or you had to open up your computer and douse it in alcohol before it would record anything at all?

Here’s a little perspective. A few years ago, there was quite an uproar on ‘that forum’ about Pro Tools not working as it should. The problem, I seem to remember, was that if you bounced a clip in real time, exported the same clip offline, and then compared the two resultant audio files, they would ‘only’ cancel each other out to around -100dBFS. Well boo-hoo. If the finer points of fixed- and floating-point digital summing engines give you that much of a headache, I’ve got a lovely old tape recorder you might be interested in...

Chris Korff is Reviews Editor (and tape op) for Sound On Sound magazine. He is currently selling an outstanding example of Fostex’s classic Model 80 tape recorder.