My songwriter hates my producer, who hates my engineer...

The problem in my generally peaceful studio is one of focus. My songwriter is a 'big picture' guy. Does the chord progression support the melody? Does the lyric say what it should to get the message across? Is it emotionally consistent or is it sending mixed messages? Does the style and arrangement suit the sentiment of the song?

My producer is all about the performance. Is the vocal in tune? Are the instruments all supporting the message? Should we try another run-through with a bit more aggro, or a bit less? Should we try a different snare drum give the chorus a bit more oomph? Or maybe we could record all the guitars backwards? 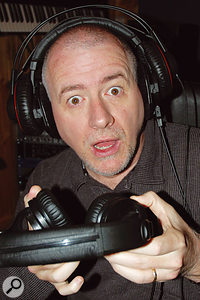 And my engineer is, typically, fixated on the sound. What if we try a different reverb on the second word in line four of the first verse? Or print the effects we've applied to the drum program, then replace the drums with a different sample set? Or try every EQ plug-in, just to see if one of them has the magic je ne sais quoi that only he can hear is missing.

Now, when these guys are getting on well together, the studio is the only place to be. But when they're not, some serious refereeing has to take place to get anything done.

The thing that creates something of a problem is that I work alone. The songwriter, producer and engineer all reside in my head (with a cast of other specialists), and they can't stand each other. This, as you can imagine, makes the creative process a somewhat fraught one.

How many times have you read an article about someone you admire, and been amazed by how streamlined their writing environment was? They remove anything from the songwriting armoury that gets in the way of capturing the inspirational 10 percent of stuff on which the 90 percent perspiration of songwriting rests.

This is what my songwriter craves. And to keep him happy, my Autoload song in Logic Pro is set up with a bread-and-butter palette of sounds: drums, bass, piano, strings and a couple of other incidentals, ready for when inspiration needs a bit of a kick along. This drives my producer nuts, because he wants to hear all the ear candy and clever stuff happening as part of the songwriting process. And my engineer is just dying to take 2dB out of the snare at 1.2kHz.

My songwriting self is oblivious to much of this. All he wants to do is write this song and get onto the next one. The problem with my songwriter being in charge is that were he to always get his way, every song written in my studio would sound the same. Yeah, the melodies and lyrics would all change, but they'd all be arranged with piano, bass and drums. My songwriter knows this, which is why the producer and the engineer get a look in, despite the tension it creates.

I've come to the recent conclusion, however, that this tension isn't necessarily a bad thing. If I let the producer or the engineer run the show once in a while, my songs are better as a result. You see, the producer knows that my songwriter is a lousy keyboard player. Great drummer, but lousy keyboard player. So the producer kicks my songwriter's arse a lot, constantly pushing him out of his comfort zone, which is probably why my songwriter hates my producer. The engineer drives the other two nuts, because it's him who always wants to spend money and change the studio 'furniture' around, putting new plug-ins into a system that is already working very nicely, and generally getting obsessed with stuff the other two couldn't give a rat's about. However, the engineer is also the bloke who is obsessed with finding the right mic and preamp combination to stop the singer from sounding like a dalek breathing helium, so he's valuable in that respect.

All of which leaves me with a dilemma: I don't know who is in charge. I know they all make valuable contributions to the songs I write, but I'm not sure sometimes whether the tail is wagging the dog.

One certainty I have is that what used to be three separate processes are, in fact, much more closely linked than I used to think. I doubt I'm alone in this, but the only thing I can think of is to accept that, if I work alone, I wear a whole lot of hats, and the only way to keep each of the hat wearers happy is give them all time in the control-room chair.

Now, if I can only get the editor in my head to shut up, maybe the author in there can finish this article!

Dean Morris is an Aussie musician and songwriter whose day job as a graphic designer affords him the studio it keeps him away from. When in the studio, he gets terribly confused about which of his hats (or headphones) he should be wearing.