Multi-gigabyte sample libraries are now very much a part of the modern studio — but does bigger always mean better? 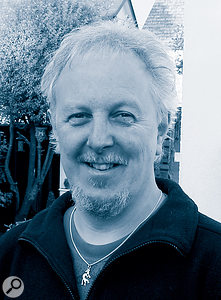 We all like to get value for money, especially in these troubled times, but I've noticed a worrying trend emerging among sample library releases: the idea that 'Bigger Is Better'. Yes, there are many superb libraries that fill multiple DVDs, recorded and created over many months and sometimes years. However, I think we're also seeing a lot of titles that offer us around 4GB of data largely because that's how much you can fit onto a DVD-ROM.

Sample library developers must have breathed a huge sigh of relief that their larger creations could now be released on several DVD-ROMs rather than a dozen or more CD-ROMs. However, as far as I can see, over the last couple of years the majority of sample libraries have been released in DVD format whether they warrant it or not. Should we worry about this? I think we should, for several reasons.

Firstly, the 'Bigger Is Better' philosophy (let's call it BIB) encourages sloppy programming. Early digital synths only contained a few megabytes of ROM-based sample data, but an inordinate amount of care and attention was spent on this ROM content. Every byte had to count, so all samples were carefully topped and tailed, and their loop points carefully chosen. Programmers were encouraged to trim off every redundant byte, and had their work rejected unless they did so.

Nowadays I hear of sample publishers being offered libraries with lots of dead space before the start of each sound, many seconds of trailing silence left in place after each one finishes, and with loops that only involve a tiny proportion of the overall sample. Not only do I object to paying for silence, but such sloppy editing also wastes our system RAM and hard drive space. I also hear of grossly over‑indulgent submissions where a single bass patch might exceed 1GB — where will it end?

Secondly, BIB also has a serious knock-on effect for the more professional sound developers. I personally know of several with many well‑reviewed CD-ROM sample releases to their credit who have left the industry during the last couple of years because they can no longer cope with the increased BIB demands being made upon them. Creating a CD-ROM library containing 600 to 700MB of high-quality sounds from scratch takes a long time if you keep your standards high, but how keen would you be when you're then asked to fill a DVD with seven times as much content for a similar return?

Thirdly, sloppy programming affects the end user. If library creators feel forced to fill multiple DVDs in order to make more sales, then instead of releasing the very best of their sounds they will throw in everything they create, including lots of 'filler' material. We may increasingly find ourselves wading through thousands of lacklustre sounds trying to locate a relatively few inspiring ones, where 10 variations of each synth sound are on offer rather than one well-programmed one, simply because there's plenty of space available.

Developers may also plunder their entire back-catalogues in an attempt to keep up with the BIB brigade (watch out for 'Best Of' or 'Remastered' collections with a few extra sounds thrown in for luck). Other tricks are already being used by the marketing folk to achieve some of these apparently huge libraries. One recently came my way advertising 'over 4GB of content', which turned out to be the same 1.3GB of loops presented in three different loop formats. Sneaky, or what?

Fortunately, the BIB trend has also resulted in some smaller developers abandoning the DVD medium and returning to smaller and more bespoke download‑only libraries — so at last some of us can return to choosing the sounds that we really, really want, rather than buying another of those vast 'the only library you'll ever need' compilations. So if you're considering buying a new sample library, don't assume that bigger is necessarily better. Support developers that offer us labours of love rather than a love of labour.

When not producing features and reviews for SOS, Martin Walker can be found writing mysterious music and meditating in a stone circle — sometimes simultaneously.