What's The Future Of Mastering? By Russ Hepworth-Sawyer

There are some things in life that always follow procedures. A film, for example, is shot, cut, promoted and released. Mix together amazing ingredients in the right way, bake in the oven for while, then eat cake. The same used to go for making albums: record, mix, master, press, promote and release. This was the process I had relied upon in my career as a mastering engineer, but the music industry and listening trends have changed enormously, and continue to do so.

I think the album is a wonderful format. It can be a story, an experience, or simply 40 minutes of pure escapism. There’s an intended start, middle and end. It’s a form in which the mastering engineer (ME) can assist the artist with their statement and intended story. We can get stuck in ensuring there’s the right ‘flow’ between tracks and that the listener experiences a cohesive collection of songs. We all have those albums where we’re already poised, ready to sing along or break out into air guitar as we know precisely when the next song will begin...

A lot of my clients these days, though, are heading more towards EP work, and albums much less so. I suspect this is so they can maintain momentum and keep publicity capital by ‘releasing’ lots of little EPs, via social media, rather than an album, with its long release cycle and greater expense. But at least with an EP there is a cohesive format that we mastering engineers can work with — for the time being.

However, the current trends of listening to streamed audio and shuffling on mobile apps will only become more prevalent and, if I’m being really pessimistic, this could even see off the EP. 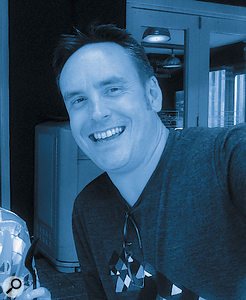 What does this all mean for the lowly mastering engineer? If tracks can be played in a random order, perhaps all mastering engineers should work to a single loudness standard, such as R128. While we’re at it, why not agree on a ‘master’ standard of tone, character and so on, so that Royal Blood can sit next to Vivaldi’s Four Seasons in a shuffle? As bizarre as this might sound, the consumer electronics industry might just inflict that automated process upon us, like they have with automatic volume levelling between tracks. Just imagine the effect that this could have if used over the course of a mastered album of carefully segued songs.

What can we do, then? Is this the end of the album? What about the EP, or even the formal CD single? Should we resign ourselves to a ‘downward’ spiral that will see only the song being of importance?

The people behind auto-mastering services such as landr.com clearly think so. If you’ve not yet come across it, this is an online service currently being marketed to music producers that offers algorithmic auto-mastering of tracks, for much less than the price of an ME. Most of us mastering engineers have yet to be convinced that this is a good idea, but have our clients? And will developments in auto-mastering eventually produce a result that’s good enough to satisfy the would-be clients of the future? As recording artists are forced to change their business models — becoming more self-released and self-funded — it’s quite possible that the art of mastering could be restricted for all but those able to afford it and who see the value of it.

While we might not like the idea of the final musical product reaching a listener in a way that wasn’t intended (Pink Floyd certainly didn’t when their material first went on sale in iTunes), we actually do a lot more than juggling track order. We might create radio edits with a bit more punch, and make sure that the audio meets the technical requirements for a vinyl pressing. Even when you have no intention of putting out any physical copies, the ME still serves an invaluable function: we are the at the end of the line when you need a second pair of ears on a mix.

Mastering is an important, personal, communicative art form that ensures beautiful work still reaches our ears despite the technical challenges of data-reduced audio and the various limitations of playback systems over the past 20 years. And, with the recent resurgence of vinyl sales, some mastering engineers might still be in work for a little while longer than others.

Russ is a former SOS contributor and an author for Focal Press. He spends most of his time mastering through his company MOTTOsound.co.uk, as well as organising some rather fun weekends teaching mastering and mixing.