A lot of mixes in dance-music genres trade heavily on thick synths, heavy effects and copious distortion to create full-sounding textures, but at the expense of mix clarity — the quality and detail of individual parts are simply obscured behind a layer of mush. Not so this tune, however, in which mix engineers Jack Patterson & Wez Clarke have managed to keep everything crystal clear, allowing those lovely string recordings to make a real statement despite their comparatively smooth high-frequency timbre. This is partly because of the restrained upper percussion levels, but I think it’s also because the mixers appear to have resisted the temptation to use heavy synth pads to support the choruses, a move which could easily have submerged those string players under the sonic equivalent of porridge. As such, I’d recommend this tune as a mix reference for any aspiring EDM producer who wants their audience to fully appreciate arrangement intricacies. (That said, I can’t help feeling that the string levels have been slightly overcooked in the second pre-chorus at 2:08-2:23, where they become a bit distracting from the vocal. Then again, you could argue that the strings make a better hook than the vocal at that point...) 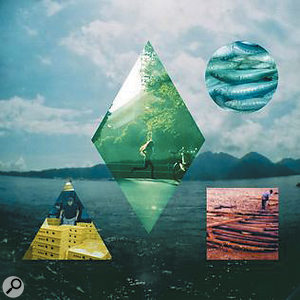 The keyboard part that characterises the opening of this track (from 0:16) is also unusual in many respects. For a start, it sounds like it’s being passed through some kind of vibrato processor (or perhaps a tape wow/flutter emulator), which is modulating the pitch so much that the tuning actually begins to become rather vague. I’d guess that it’s modulating almost a semitone either way at a rate of about 2-3Hz. Although Clean Bandit might have done this with a plug-in, I suspect it’s being created by some kind of modulation routing within the synth/sampler patch itself, given that it seems only to kick in after the onset of each note — in other words, the note attacks all sound in tune, even though the sustain tails don’t. Then when the beat comes in at 0:48, you get what sounds like super-fast note retriggering giving a cool rhythmic ‘ripping’ effect, made all the more effective because it contrasts so strongly with the more traditional grand piano patch which arrives with the chorus at 1:04. Mike Senior 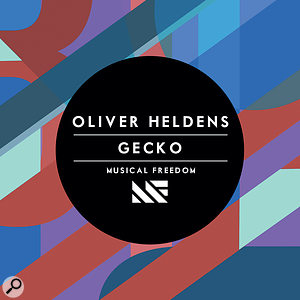 The hollow sound of this particular bass line is definitely reminiscent of a square wave to me, and if you look at the first 10 seconds of this track on a spectrum analyser you can see why: it’s mostly just the fundamental, third harmonic, and fifth harmonic which register on the display — a characteristic spectral signature of that wave shape. The sound is almost certainly being low-pass filtered in some way, though. An unadulterated square wave is a pretty buzzy-sounding thing, whereas what we have here is round and mellow, with precious little energy to speak of above 350Hz. In addition, a high-pass filter sweep kicks in briefly towards the end of the introduction (0:12-0:17) to create a transition into the verse vocal entry.

And when we get to 1:18, is the bass deliberately imitating a heartbeat to support the “feel the bass in my heart” lyric at 1:24? I’d like to think it’s intentional, but if so I reckon they might have missed a trick in keeping it steady throughout the section, because speeding it up would surely have assisted subliminally with building excitement into the following chorus at 1:49. One of the oldest tricks in horror-movie Foley, that... Mike Senior

‘All About That Bass’ 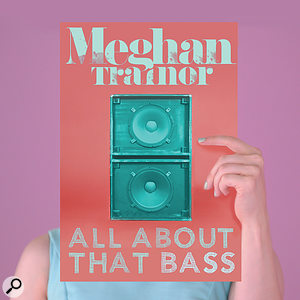 I don’t think I’ve heard such an enjoyable combination of pop song and social message since Ms Dynamite’s ‘It Takes More’, but that’s certainly not the only thing to admire here. The vocal line’s extended use of faux triplets (ie. a pattern of two dotted eighths followed by a straight eighth) across the four-four beat during the pre-chorus is great, for instance, and there are plenty of ear-catching vocal stylings besides: the stutter edit on “bass” at 0:13; the striking drop in pitch for “size two” at 0:18; and the pitch scoop at “booty back” (1:27), which to my ears draws a rather ironic parallel with the title hook of Robin Thicke’s fratboy smash ‘Blurred Lines’.

The drum programming is worthy of examination as well. Although a bit of phase cancellation between different sections of the arrangement confirms that the main part is a loop, it’s more engaging than most stock loops on account of the messy little ratchet-like sounds that lurk around the main hits and somehow help glue them together with the various clap sounds overlaid on top. It’s as well to notice that there are no cymbals at all in this arrangement, which is pretty uncommon in chart productions, but leaves plenty of room for such HF details, as well as for vocal nuances. The drums are mixed pretty starkly dry in this mix, in contrast with the vocals, which are clearly flattered with an audible reverb effect. Although the danger with a tactic like this is that the vocals can begin to feel too distant if you’re not careful, the slightly retro reverb timbre and (judging by the stereo Sides signal) touch of effect predelay seem to have avoided that in this case. Mike Senior 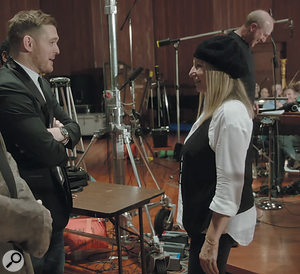 Whatever you think of Barbra Streisand’s music, you’ve got to admire her professional longevity, because she’s apparently topped the Billboard album charts at least once every decade since the ‘60s — her latest number one being her 34th studio record, the all-duets album Partners. In the absence of an official single release, I’d like to focus on ‘It Had To Be You’, because , The Vamps, it intrigues me how Streisand’s voice relates both to the backing arrangement and to the voice of guest vocalist Michael Bublé.

The first thing that strikes me is how powerful the fundamental frequency of Streisand’s voice often is by comparison with any more characterful timbral energy further up the spectrum. Check out 0:23-0:41 (“making me glad... up to you to explain”), for instance, and in particular the word “blue”, where this bottom-heavy timbre combines with an unnaturally static pitch-centre (need I say more?) to generate a creditable impersonation of a 350Hz test tone! Then, when Bublé’s first phrases zing us with pop-friendly 4kHz and 7kHz spectral peaks, I can’t help feeling that the two voices would have sat together a whole lot better had a couple of decibels been dipped out of his vocal channel at both those frequencies. Not that he has no strong fundamental frequencies, it’s just that they’re rather more sporadic (eg. the big 175Hz peak on “seen” at 2:16) and mostly restricted to those few occasions where he’s singing softly.

Sure, the two vocal tones fit together quite snugly when both leads are singing homophonic harmonies for a couple of phrases from 2:36, but the moment they go their separate ways again at 2:46 they both feel oddly incomplete to me: Streisand’s timbre feels rather bloated, Bublé’s thin and strident. Furthermore, when the horn section starts giving it the full razzle-dazzle at 2:58, Bublé’s vocal tone cuts through fairly easily, but Streisand’s really struggles — her high frequencies are so seriously masked that it sounds like she’s singing through a blanket a lot of the time (on “with all your faults” at 3:27, particularly). Given how loud she is in the mix, the low-mid-range baggage she’s carrying around also makes the rest of the arrangement sound rather gutless by comparison.

For me, this is a textbook case of somewhere I’d have wanted to mult the vocals out to different channels, so that independent EQs could have been applied to Streisand’s voice for the solo and harmony sections, as well as to combat the masking effects of the full-force band texture. Don’t just take my word for it, of course — have a listen for yourself! With a bit of EQ automation, you can even experiment with changing Bublé’s high-mid-range vocal tone by processing the full mix. Mike Senior 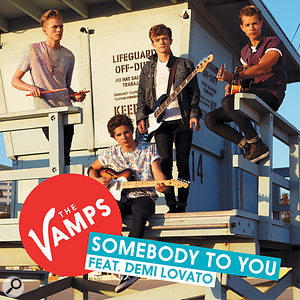 This song exemplifies nicely one of the simplest pop production tricks you can use to make your choruses sound bigger than your verses: widening the stereo spread. So, in this case, each of the three chorus sections (0:39-1:01, 1:37-1:59 and 2:10-2:54) is preceded by a section with a narrower stereo picture: respectively, the first verse and pre-chorus; the second verse and pre-chorus; and the middle section. What’s a little more interesting, though, is that the last of these is quite a bit narrower, and I can see a good justification for this. The producers already chose to fully showcase the stereo width in the first chorus and, like so many things at mixdown, there’s only so far you can push stereo width before you start getting problematic side-effects (such as mono-compatibility problems). Therefore, the only way to increase the impact of the third chorus in terms of stereo spread is to increase the contrast between that chorus and the section which precedes it.

There’s also rather a good example of a straightforward feedback delay effect being used to increase sustain on the “yeah you!” sampled hook. You can hear it most clearly right at the end of the song, but the delay’s there throughout, subtly thickening and extending the massed-vocals texture. Notice also that the delay repeats are tempo-related, which helps them sink into the mix, and they also retain the stereo positioning of the dry sound. You have to be careful with some plug-ins that you don’t end up with mono delays on stereo input signals, because that can undesirably clutter the centre of your stereo image. Mike Senior

Whatever mic Bill Haley was using here, it sounds like he was all but eating it at times, because you can hear serious wind-blasts at various points throughout this song. (I’m kind of assuming it wasn’t a ribbon!) Although you normally associate wind blasts with plosive sounds such as ‘p’ and ‘b’, this track provides a good demonstration of how many other consonants can cause similar problems, because you get big low-frequency thuds appearing on “three” (0:01), “four” (0:02), and “twelve” (0:07) in this case. To put it in perspective, these blasts produce significantly more low end than the kick drum and bass combined, as you can clearly hear on “three” at 0:28. Maybe the engineers at Decca’s Pythian Temple studios didn’t think anyone would hear it through ‘50s playback technology. Or maybe they couldn’t hear it through their ‘50s monitor loudspeaker...

Other things to listen for here are the live-to-tape fader ride of the electric guitar into the solo at 0:40, arguably two bars too early, and the extremely roomy drum sound, most of which we’re presumably hearing via the instrument’s spill on other mics within the large Pythian Temple live room. 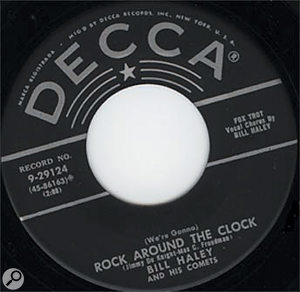 What puzzles me is what’s producing that super-upfront clicking sound. I can’t imagine it’s any part of the main kit, because if it was we’d have more dry sound from the rest of the drums, but there’s only one drummer credited on the session. It can’t be anything the lead guitar’s doing, because I can’t believe he’d have been able to keep it going during his solo. Could it be string slaps from the bass player? Seems unlikely to me because the bass notes seem too sustained for this to be possible. Plus this sound’s missing from every live performance I’ve seen. Could it be the great uncredited washboard performance of rock and roll history? Mike Senior