Sounding Off: TB or not TB? That really is the question. 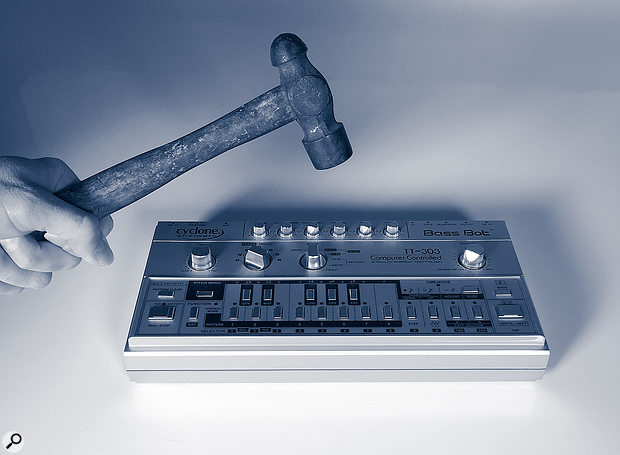 A few months ago I attended a synth symposium organised by the Manchester MIDI School, which was held at Factory251, the legendary home of Factory Records. The panel was an illustrious one, including Peter Hook from Joy Division and New Order, Graham Massey from 808 State, and Zed Bias, who you’ll know if you’re into the underground dance scene. Then there were synth techs James Walker and Andy Pop plus Gordon Reid, whom I knew from these pages. Toward the end of the evening, each of the members of the panel was asked which synth he would consign to Room 101. For the most part, the answers were along the lines of “everything has its place, there’s no such thing as a bad synth”; but when Gordon answered, he said that if he were wealthy enough he would buy every TB303, TR808 and TR909 still in existence, throw them onto a pile, pour aviation fuel over them and then set light to the lot. F***!, I thought, he might just as well have walked into the Stretford End on a Saturday afternoon and yelled out that Sir Matt Busby and Sir Bobby Charlton were talentless oiks and, like Alex Fergie-time, unfit to grace the beautiful game. [Presumably some kind of football reference? — Ed]

Of course, he was booed but nothing was thrown, and what he said next set me thinking. “Whatever you feel about them,” he suggested (and, after all this time, I’m paraphrasing), “they’ve dominated for too long and they’ve locked dance music into too rigid a framework.” When challenged, he then pointed out that the Beatles’ transition from the rock & roll of ‘She Loves You’ to Sergeant Pepper took just four years, psychedelia lasted just two or three, the dance music of glam rock lasted from 1971 to the emergence of punk in 1976, punk itself lasted just two or three years before metamorphosing into the New Wave, while disco, the first wave of electro-pop and the New Romantics lasted a bit longer until we reached the widespread emergence of rap, hip-hop and everything that we now lump under the banner of EDM. And that was in 1988 or thereabouts, nearly 30 years ago!

You could argue that boy bands, sparkly eye-shadow, safety pins, frilly shirts and even 20-minute songs about elves never fully went away, much as we might wish they had, but thumping four-on-the-floor EDM has nonetheless become the dominant form of popular music in much of the Western world — whether watered down into family-safe pop for Saturday night talent shows or pounded out in black painted basements later the same night. And that thump comes from TR808s, or maybe TR909s, with bass lines contributed by a TB303. Or maybe from an XBase 888 or 999, or an MFB522, or a Yocto, or an AcidLab, or a 9090, or a Boomstar 3003, or various Xoxboxes, or ReBirth, or any of the other soft synths that attempt to recreate the quirks of the originals or even, as I am now seeing more and more often, Roland’s Aira TR8 and TB3. So I tried creating a track without using any of these and, of course, it didn’t sound right. So I changed the rhythm a bit and tried to find sounds that worked, but I was so far out of my comfort zone that I soon found myself gravitating back to what I know and love.

That was when it struck me. If the Beatles and everyone else had stuck with the dance music of ‘She Loves You’ because they were comfortable with it then — irrespective of technical advances — we would have had no pyschedelia, no glam rock, no punk, no New Wave, no disco, no electro-pop, no New Romantics and no EDM. We may not want to listen to the music of the ’60s, ’70s and ’80s, but we’ve lost something really important from those decades: the courage to break the mould. It took me a few months to own up (even to myself) to having this thought, but is it time that we retired our TRs and TBs and forced ourselves out of our comfort zones? And if we did, what might we discover? Don’t ask me — I haven’t a clue. And maybe that’s the problem too.

Percy wouldn't supply us with a picture of himself or a bio, so here's a picture of us trying to smash up a 303 clone whilst high on puritanical zeal.