100 Plug-ins Every Engineer Should Try 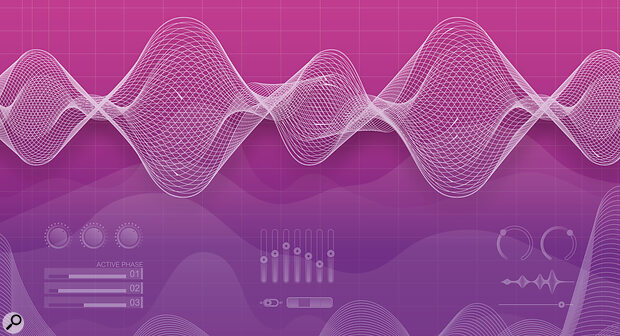 SOS writers pick their favourite plug‑ins and tell us what makes them special.

On top of the plug‑ins that come with your DAW, there are thousands of third‑party offerings. With so many on the market, just compiling a shortlist to demo can feel daunting. How do you even know which ones to consider? Well, you could do worse than ask the experts. Our writers at SOS have been testing and using audio plug‑ins since they were invented, and in this article we’re drawing on their experience to help you narrow down the field. We invited our regular authors to nominate their favourite effects and processing plug‑ins, and explain what makes them so great. (We’ll cover virtual instrument plug‑ins another time.)

This isn’t a ‘top 100’, and there are lots of good plug‑ins that aren’t included. But next time you’re looking for new ways to finesse your vocals, detonate your drums or massage your mixes, we hope this list will be the perfect starting point! 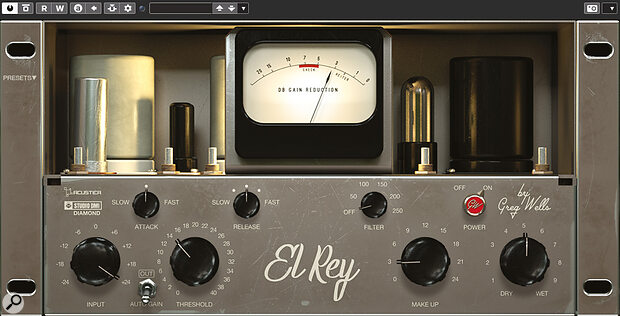 I could have named any number of Acustica’s Acqua ‘dynamic convolution’ plug‑ins here because, when it comes to bottling the character of analogue gear, they sound better than anything else I’ve heard. I settled on El Rey as my pick because, of all the Acqua range, this arguably strikes the best balance between demands on the CPU, an elegant yet intuitive GUI and stellar‑sounding results. It has almost stopped me lusting after hardware tube compressors entirely... Matt Houghton

The bundled compressor in Logic’s impressive plug‑in suite doesn’t seem to get a lot of love, but I think it is a little gem. I suspect that some users fail to appreciate that the different ‘skins’ are far more than just a different look, but are in fact significantly different circuit emulations, each suited to different applications. Dave Lockwood

My preferred plug‑in for compression and limiting, this emulates the immense versatility, usability and sound character of the Audio & Design F760 Compex hardware compressor‑limiter, which was the go‑to outboard in my formative years. It can turn its hand to most things and always delivers great results. Hugh Robjohns

I have 27 channels of hardware compression and believe hardware still holds the edge, especially when you’re hitting things hard. There are some exceptions, though, which are so good that they sit happily alongside my most esoteric outboard. This emulation of the Shadow Hills Mastering Compressor is one: it has a beautiful optical compressor plus a VCA stage, and is the perfect coloured mix‑bus glue. It compares wonderfully to my real Dual Vandergraph, which is saying something! JG Harding 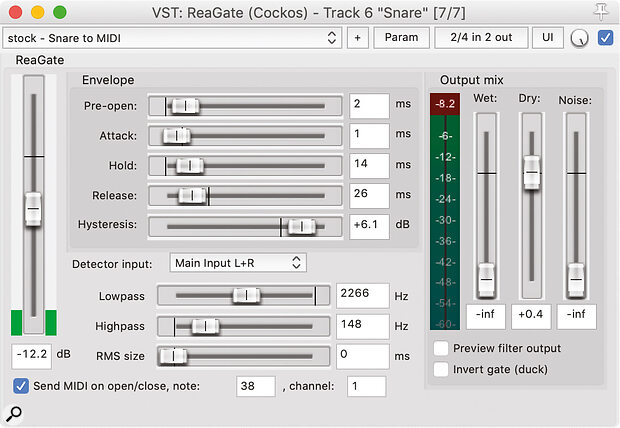 I use gating for a lot of mixing tasks, and this one is so well specified that I’ve not bothered using anything else for years. The variable lookahead is great for high‑threshold gating of drums without losing the very start of the attack, and the flexibility of being able to set Wet and Dry levels (as well as polarity‑inverting the wet signal for ducking) is really handy. It can even squirt out a MIDI note when the gate opens, for basic sample‑triggering. Mike Senior

Included with Reaper. Also part of the free ReaPlugs bundle for other Windows DAWs. 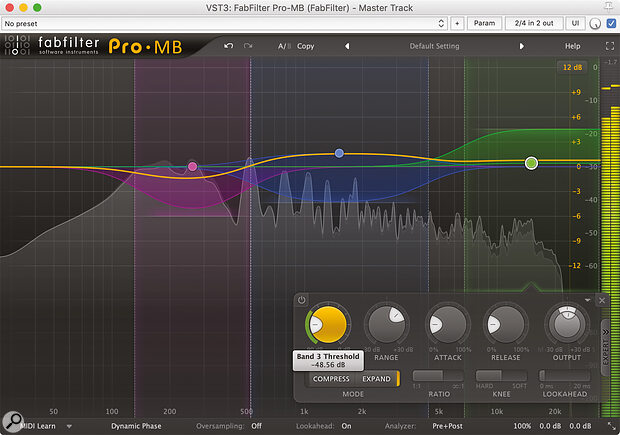 I’ve used Pro‑L on every mix for several years now. A transparent, simple‑to‑use limiter, it allows you to manage the loudness of your mixes and masters with ease. I also like to use it as the last stage of processing on a drum bus, to shave off a few of the loudest transients before they interact with any master bus processing. Neil Rogers

Despite having only two controls, the LA‑2A compressor is a notoriously difficult piece of hardware to model. I can’t tell you whether IK Multimedia have truly nailed it, but there is something rather wonderful about their White 2A that I don’t hear in every LA‑2A emulation. Not only is it supremely smooth, but it somehow brings the midrange into focus in a way that helps almost anything sit in a mix. Sam Inglis

The ‘advanced’ version of Finality is like an LA‑2A emulation on steroids. Like the original, at its core it’s incredibly easy to use and can achieve significant amounts of limiting without your audio turning to mush. However, the additional control options take it to another level, going from soft and subtle to punchy and aggressive. Great for drums, loud guitars or on a mix bus. John Walden

One of those compressors that’s all about the grit and attitude it can inject — the sort of toy you don’t realise you’re missing until you have it! It has a distinctly analogue vibe, is really easy to use (until you dive into the uber‑tweaker’s second page!) and most importantly it sounds superb. Matt Houghton 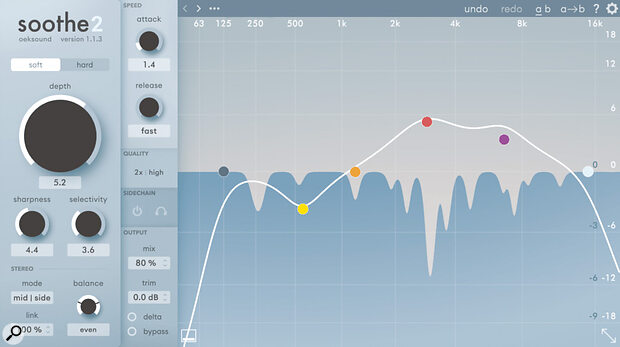 Some people blame digital recording. Others point the finger at cheap and nasty capacitor mics, piezo pickups and untreated rooms. Whatever the reason, though, there’s undeniably a lot of harshness about, and there’s only so much you can do with conventional EQ to tame it. Enter Soothe, a plug‑in that quietly irons out all the jagged edges in your mix, leaving you free to worry about all the other things that are wrong with it. Sam Inglis

Using an undecoded Dolby A noise‑reduction processor as an effect adds a distinctive, glossy sheen that is hard to replicate in other ways. It’s a trick that has been neglected by plug‑in developers, but Overloud’s Dopamine absolutely nails it. Use it on backing vocals, pads, keyboard instruments and much more. As the name suggests, it’s addictive! Sam Inglis

Sometimes you want something that just works, with the minimum number of controls to fiddle with. This is one of those! Set and forget. Dave Lockwood

I find it hard to get too excited about plug‑in compressors but this plug‑in, which includes a convincing emulation of Empirical Labs’ famous Distressor hardware compressor, can do most of the jobs that need doing in a mix. It also has some nice options for subtle, but very effective, soft clipping‑style saturation. Neil Rogers

An unusual multiband dynamic EQ that can auto‑detect and compress frequency peaks in a signal. Great for taming harsh peaks in vocals or guitar‑solos, it can also take the edge off over‑spiky synth filter sweeps. It could do with a side‑chain EQ, to focus its action more readily: I often implement this by putting an EQ plug‑in with the required ‘side‑chain’ curve before it, and then another EQ plug‑in with the opposite curve after. Mike Senior

Who’d have thought you could do so much to manipulate a drum without a standard EQ? This might not be the first plug‑in that springs to mind when someone says ‘SSL’, but I love it — and if you like tight, punchy drums sounds, you will too. Matt Houghton

$129. Also included in the Complete Native Bundle subscription, $14.99 per month. 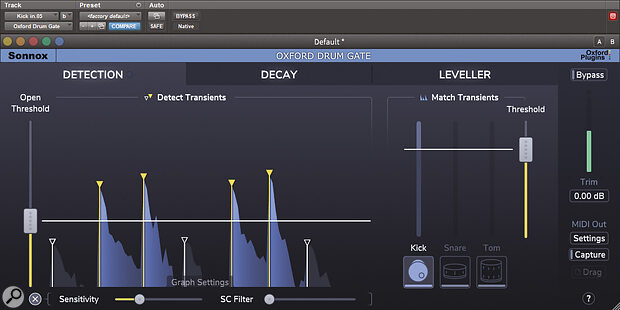 Gating drums is straightforward when you have a great drummer and a well‑recorded kit. When that’s not the case you need Oxford Drum Gate! It makes isolating individual drums so quick and easy, and the decay section lets you tailor which frequency range you want to allow to sustain and which to really clamp down on — a fantastic feature for toms in particular. Neil Rogers

The ‘loudness war’ may be well and truly over for mixes, mainly thanks to the loudness normalisation of streaming delivery platforms, but there is still a place for things that make individual sources sound bigger or louder. Sonnox Inflator has been around for a long time now, and whilst there are dozens of plug‑ins that purport to do much the same job, I’ve not found one that does it quite so well, or with as many and varied applications. Dave Lockwood 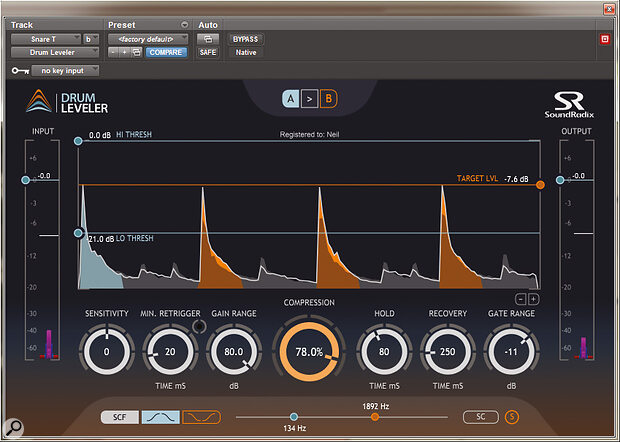 There are times when you want drums to sound obviously compressed, and there are times when you just want the level of each hit invisibly adjusted to make them more consistent. That’s what Drum Leveler sets out to do, and it succeeds magnificently; besides which it’s also a spectacularly good gate, and a source of interesting and useful dynamic effects on things that aren’t drums. Sam Inglis 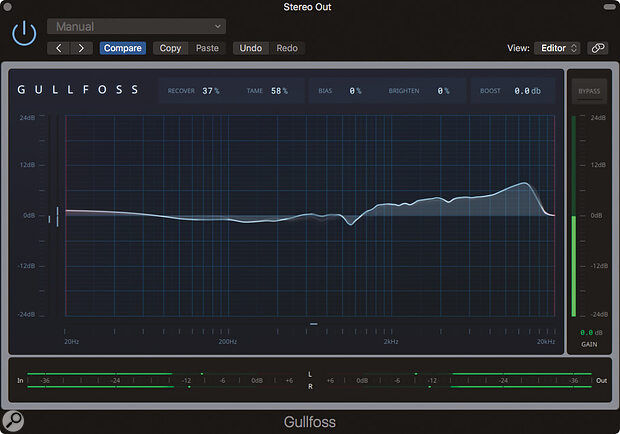 I’m generally a bit wary of plug‑ins when I don’t fully understand how they work, but I’m happy to make an exception for Gullfoss, whose makers describe it as “inspired by quantum theory and mathematical methods such as non‑commutative algebra, differential geometry, and information theory”. Gullfoss seems able to tame resonances that you didn’t know were there until you hear them taken away, and somehow emphasise all the nicest bits of a sound without making it any louder. As I write this, they’ve just announced some improvements and I’ll be very interested to find out more. Dave Lockwood 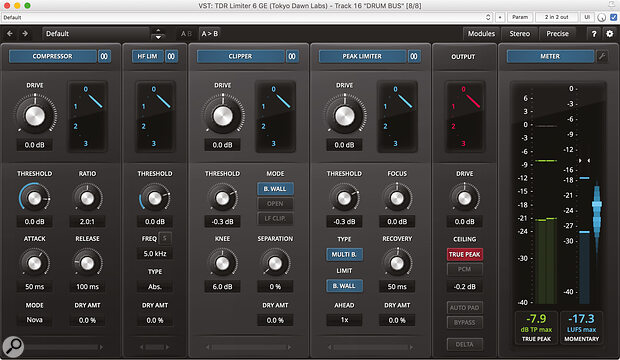 Tokyo Dawn’s plug‑ins offer such great value for money and this, in my view, is their best one. Not only do you have several stages of highly configurable processing available here, including compression, HF limiting, true peak limiting and clipping, but there’s superb metering too. It often finds a home on my drum bus, as well as my DIY mastering chain. Matt Houghton

I must have auditioned every master limiter there is but always come back to L316. Partly it’s the simple, functional UI but mostly it’s that the final result just always ‘sounds nice’ to me. Choose Warm Analog release, High separation and set the threshold and release to taste, and you’ve got a smooth, pleasing brickwall that goes loud without being overly harsh and aggravating. Drums Punch is another voodoo setting that’s great for mastering rock if you don’t have kick and snare stems to hand and want a bit more punch. JG Harding 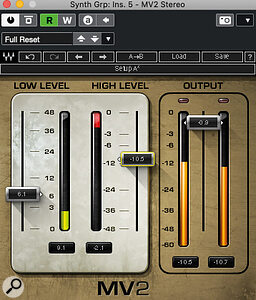 While the world contains an abundance of compressor plug‑ins, there are considerably fewer that offer upward compression. Waves MV2 is ideal when you need to even out an overly dynamic performance that cannot afford to get ‘lost’ in a mix; vocals and bass are the obvious candidates. Vocal Rider and Bass Rider may offer more control but, with just three sliders, MV2 is a doddle to use and often all that’s required. John Walden

If any plug‑in has reached ‘classic’ status, it is surely ‘RComp’. It delivers super‑transparent results so easily, and sounds really smooth. Stack a couple of instances and you can first control the peaks and then provide more general compression on almost any instrument or bus. No fuss and still top‑notch. John Walden

Vocal Rider aims to provide transparent levelling in the same way as an engineer can by moving a fader. It has the option of side‑chain control to allow vocals to remain above the background music and also allows its own fader movement to be written as automation so that you can edit it, should you wish to refine the result. I find it useful in controlling vocal levels prior to adding conventional compression. Paul White

Do you really wanna write automation for hours? Nor do I, and TrackSpacer helps me get away with avoiding it. Take a side‑chain from a vocal, for example, and route it into TrackSpacer placed on the guitar bus, and the guitars move out the way of a specific frequency range in the vocal in real time. It’s quick, easy and does the job. There are other ways to do it but this works and works well. JG Harding