The SOS team pick their highlights from 2020's hardware and software launches. 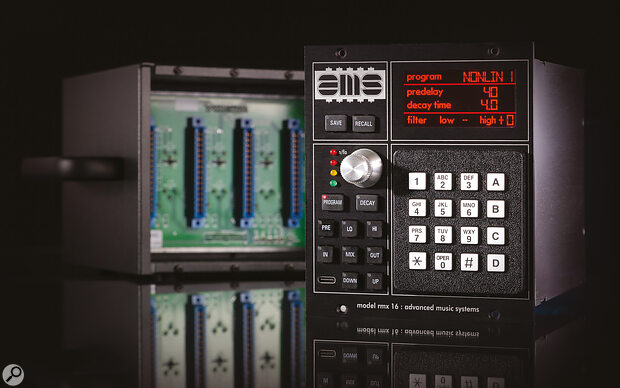 Although designed 40 years ago, the instantly recognisable AMS RMX16 has earned its reputation as a ‘classic’ artificial reverb processor. While original models may now challenge maintenance departments, they are still as popular today as back then, and change hands for vast sums! For that reason I was delighted when AMS and UAD combined their talents to create a superbly accurate plug‑in version... And this year I became positively ecstatic when AMS essentially built a hardware version of the software emulation of the original hardware! Despite its unusual gestation, the 500‑series RMX16 retains much of the distinctive style and tactile character of the original, along with its fabulous sound. Highly recommended. Hugh Robjohns

Modern mic preamps are pretty good these days, but few can be considered ‘exceptional’ — yet Cranborne’s genuinely innovative Camden EC2 is exactly that. This two‑channel device is a flawlessly transparent and quiet high‑gain preamp, with an outstanding technical performance that easily matches or exceeds the established high‑end marques. And when a little character would help, Cranborne’s unique Mojo circuitry offers two different and very controllable forms of delicious coloration. Two independent and powerful headphone amplifiers (with external inputs) are also included, making the EC2 a complete and elegant package for tracking on location or in the studio, with artist and engineer monitoring built in. I really can’t recommend the EC2 highly enough, it’s without doubt the best product of 2020 for me! Hugh Robjohns

If Dr Frankenstein invented a distortion device, it would probably look something like the Gamechanger Audio Plasma Rack. The main distortion comes courtesy of a high‑voltage (5500 Volts!), Xenon‑filled discharge tube, in which you can see your audio signal being processed. Get your head around the controls and you can tame it just about enough to make it useful. You won’t use it on every track, but you’ll know when you want it and when you do it will put a smile on your face. Matt Houghton 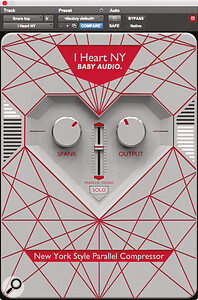 Since I reviewed it back in March, an unassuming plug‑in with just three controls has quietly become a mainstay of my mixes. If, like me, you’ve often struggled to get useful results from 'New York Style' parallel compression, Baby Audio’s I Heart NY might just change your mind! Sam Inglis 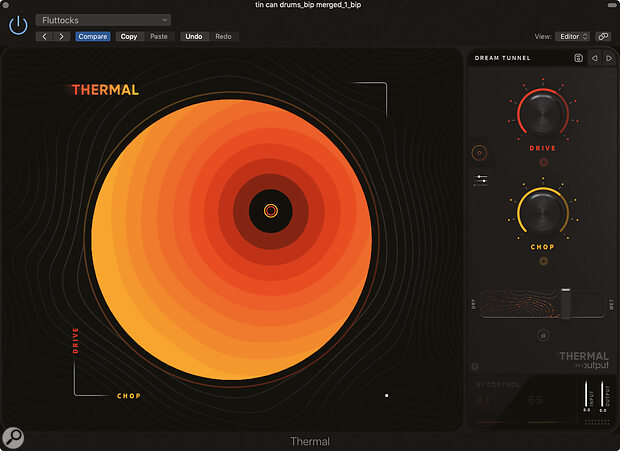 Output’s Thermal is a splendidly anarchic multiband distortion processor that majors on modulation. Though it is of particular appeal to the more experimental musician, it has applications in all sorts of genres, from EDM to chillout to mainstream pop. I have already found numerous uses for Thermal on my current album project.  Paul White 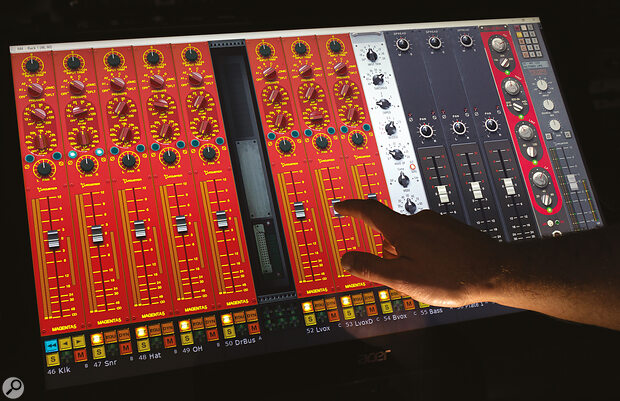 I’m not really sure how to categorise Quantica Modula: a plug‑in controller, perhaps? Essentially, it’s a standalone hosting environment for custom versions of Acustica’s excellent Acqua range of ‘sampled’ plug‑ins. You load the Modula plug‑ins in your DAW, and they’re mirrored in Modula’s touchscreen‑friendly mixer‑style GUI. Importantly, relative to some DAWs, it’s very CPU‑efficient, which allows you to run more instances before your computer falls over!  Matt Houghton 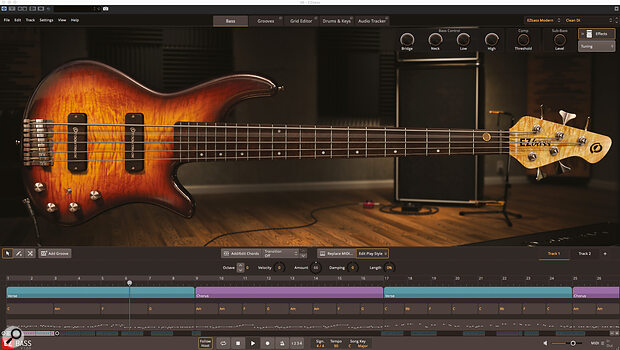 While I’m a competent guitar player who can play a bass, I’m fully aware that I’m not a bass player. However, just as with Superior Drummer 3 for drums, Toontrack’s EZbass delivers a fully professional bass performance that’s completely believable and, sonically, better than anything I might achieve in my own project studio. And it does it fast, whether used as a playable virtual instrument or by building a performance from the included grooves. Brilliant in its first iteration, and I’m sure there is more to come. John Walden 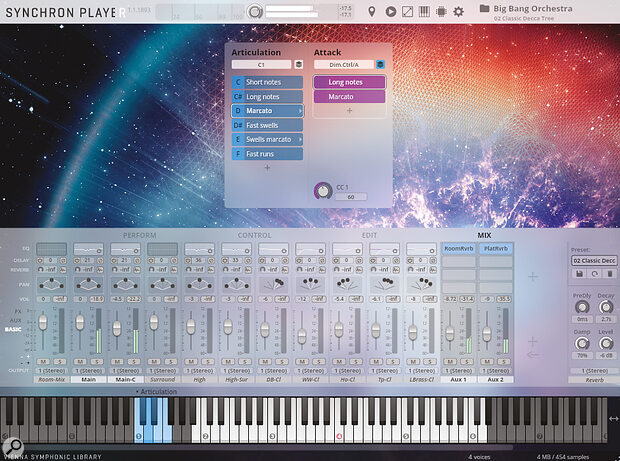 Vienna Symphonic Library’s Big Bang Orchestra currently comprises 18 themed titles, the first four of which uniquely provide a full symphonic contingent of strings, brass and woodwinds playing together live. Recorded from multiple mic positions in a large scoring stage, the series features a massive 70‑piece orchestra, six percussionists and 48 singers performing effects, hits, chords, clusters, runs, rhythmic patterns and single‑note multisamples. The samples are easy to use and sound great. Given the scale of the project, it’s remarkable that VSL are giving away the first library and selling the others at affordable prices. Dave Stewart 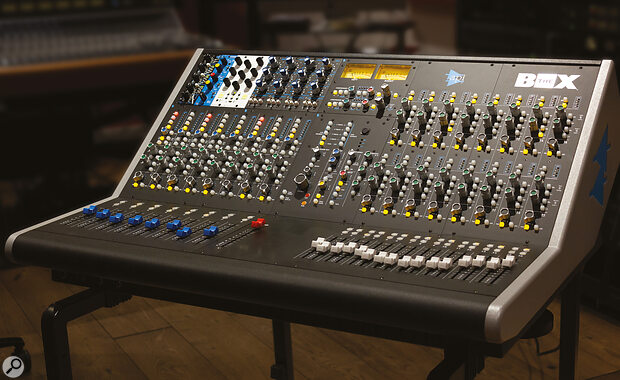 Introduced six years ago, API’s The Box brought some very attractive ‘big‑console’ engineering and features in an affordable format but, ultimately, having only four input channels and two user‑configurable 500‑series slots restricted its practicality a little too much. Pleasingly, the expanded and updated The Box 2 launched this year neatly addresses those original shortcomings with eight input channels and a fully configurable, integrated eight‑slot 500‑series rack, as well as a few other small but important tweaks to improve workflow. As a result, The Box 2 is a very attractive console solution for project studios wanting that fabulous API sound and technology in a practical and compact format. Hugh Robjohns 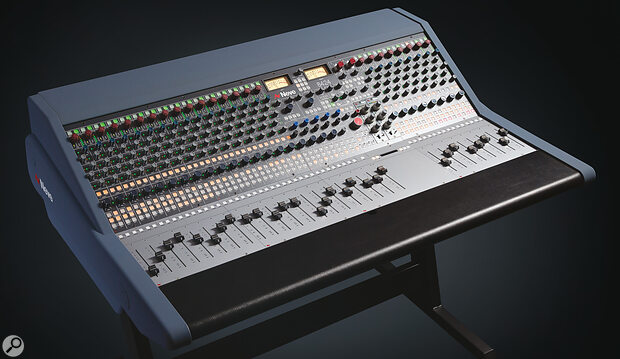 A truly wonderful concept, the Neve 8424 is dripping with large‑format console facilities, yet it’s small enough to sit on a sturdy desk. There’s a little room for improvement (more buses would be nice) but this comes closer to my idea of the perfect analogue console for a modern hybrid studio than anything else has to date. Matt Houghton 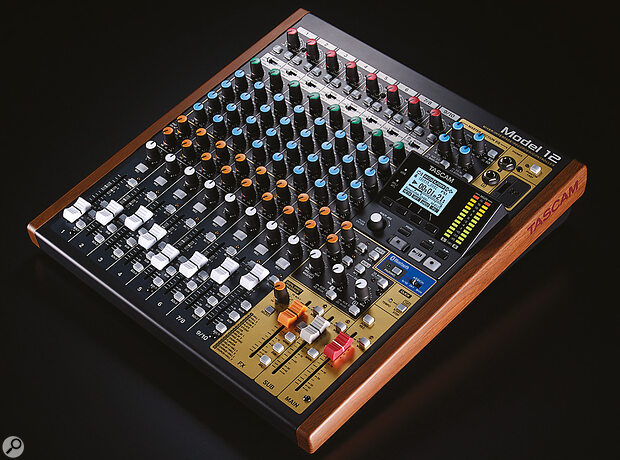 Far more than ‘just’ a mixer, the Tascam Model 12 is also a 12‑track standalone recorder and USB recording interface that offers HUI and MCU DAW‑control facilities. Both the hardware and software side of things deliver more functionality than the larger Model 24, and many (if not all) of the criticisms I made when reviewing that earlier design have been addressed.  Matt Houghton 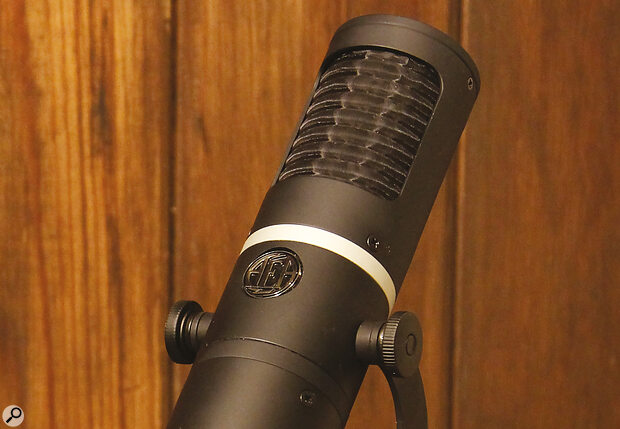 Ribbon mics have undergone a massive revival in recent years, but in some quarters they are still stereotyped as specialist guitar‑amp or drum mics. The AEA KU5A takes the neglected concept of a ribbon mic designed for up‑close, on‑stage use in loud environments, and updates it for the 21st Century — with excellent results. Sam Inglis 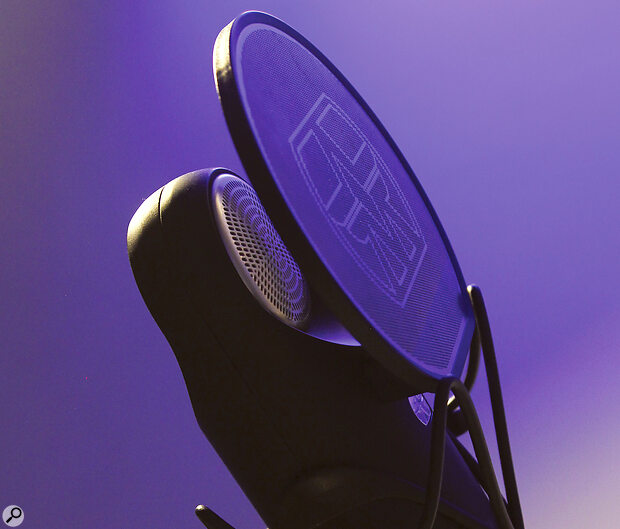 The Aston Element is like a breath of fresh air in the affordable microphone market: a capable all‑rounder that won’t disgrace itself when heard alongside much more expensive alternatives, it has its own sonic character, but it’s also surprisingly versatile. It certainly sounds a little different from a typical moving‑coil dynamic microphone, so Aston’s novel approach to capsule design has clearly paid off. Paul White 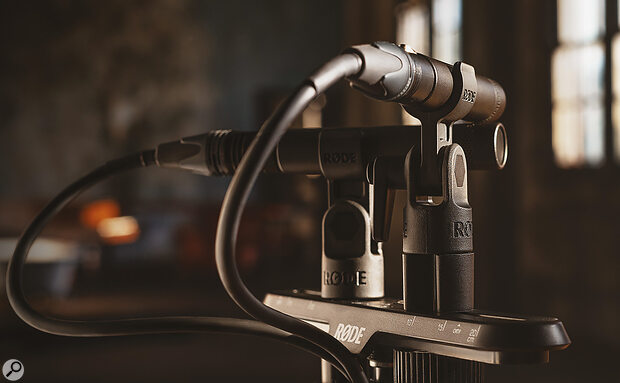 This year saw the introduction of the Rode TF‑5 stereo set of small‑diaphragm capacitor microphones, developed with the help of Tony Faulkner, British recording engineer par excellence! Visually, the TF‑5s naturally draw comparison with Neumann’s KM184s, but while the specifications are broadly similar the sound character is quite different, sounding much fuller and more airy, and without the subtle but detectable ‘squawky’ timbre of the Neumanns. These are very classy‑sounding mics that I’ve grown to love greatly. Hugh Robjohns 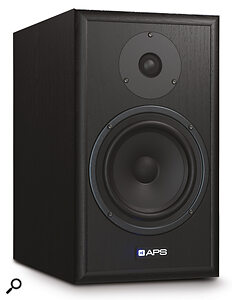 The APS Klasik 2020 is that rare thing: a truly exceptional monitor that doesn’t cost the earth. Though billed as a ‘revised’ version of the original Klasik, it’s actually a very different beast, sporting a larger cabinet and an unusual port design that behaves more like a sealed box than a reflex‑loaded speaker. Its high‑quality components and thoughtful design combine to create something greater than the sum of its parts. Phil Ward

The Air Motion Transformer or ‘ribbon tweeter’ has been around for a long time, but it’s never before been used as the basis for a pair of headphones. In the HEDDphones, HEDD Audio have solved the many technical challenges and the result is both a triumph of ingenuity and a genuinely useful studio monitoring tool. Sam Inglis 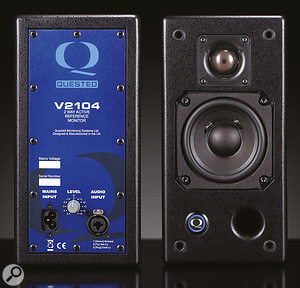 The Quested V2104 is a rewarding example of the traditional electro‑acoustic arts in a truly tiny package. Its success is all about understanding what makes a good compact monitor work, and then thoughtfully bringing together the right components to make it happen. I could easily imagine a world in which the V2104 becomes an indispensable niche tool of the audio engineering trade. Phil Ward

Sometimes a product is notable because it represents a radical innovation, but others achieve greatness just by doing what they do really, really well. Arturia’s AudioFuse 8Pre is an excellent example: an audio interface that’s simple to use, sounds top‑notch and has mic preamps that better many more costly rivals. Sam Inglis 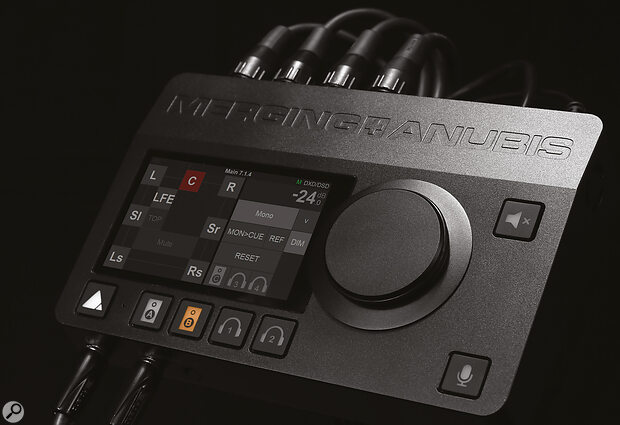 Merging’s Anubis interface is deceptively compact, because it is actually capable of managing up to 256 channels via a Ravenna AoIP connection. Moreover, it can be configured to operate in several different roles through its ‘Modular By Software’ capability, which optimises the hardware for different workflow requirements, such as a fully featured multichannel monitor controller, or a simple local recording interface, and everything in between! Ingeniously impressive technology with benchmark technical performance.  Hugh Robjohns 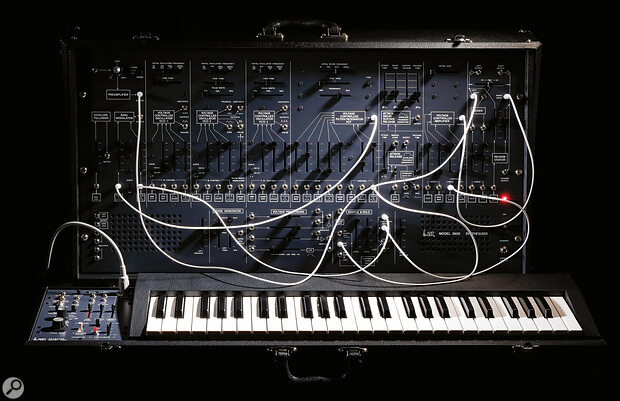 Innovation has been almost absent in the past 12 months, but there has been a small handful of new instruments that, if not groundbreaking, are lovely — and sometimes even inspirational. Of those I’ve reviewed, honourable mentions go to the Moog Matriarch, the Novation Summit and the Nord Grand, but I award my vote to the ARP 2600 FS because, in a world replete with lowest‑cost imitations of vintage keyboards, Korg have again demonstrated how the recreation of a revered synth can and should be done. Gordon Reid

Sometimes a product comes along that is built with such love and passion that it stands out amongst the rest. The Euterpe Vertice triple filterbank left a lasting impression on me thanks to its beautiful construction, elegant design and unadulterated analogue sound. Hand‑built with new‑old‑stock 1970s components, it feels equal parts musical instrument and work of art (well, it is made in Italy). Unsurprisingly, it sounds as good as it looks — a true make‑everything‑sound‑better box. Rory Dow 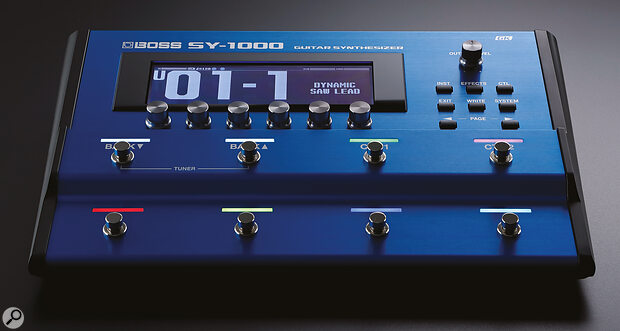 The Boss SY‑1000 represents a significant step forward in guitar synthesis. Not only does it make the whole experience more predictable and a lot more user‑friendly, it also offers a much more analogue synth‑like sound palette. The editing software makes it really configurable, and there’s all the COSM guitar and amp modelling, the impressive effects, and the guitar‑to‑MIDI facility too. The price might not put it in impulse‑buy territory, but it covers so many bases that it could save you a fortune on traditional pedals.  Paul White 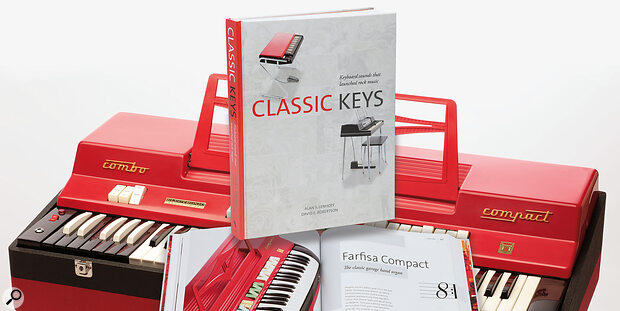 For anyone interested in the history and inner workings of classic keyboards, the breadth and depth of content in the magnificent hardback Classic Keys is quite extraordinary, as is the number and quality of images. This is not only an extremely informative book, it’s also a delight just to flick through to pass an idle moment, and I really can’t recommend it highly enough. The perfect Christmas present for any classic keyboard enthusiast!  Hugh Robjohns