Developed in conjunction with Matthias Puech, the 4MS Tapographic Delay is a hands-on 32-tap delay with a maximum delay time close to three minutes. It’s fitted with a velocity-sensitive pad and for every tap entered, the captured strength of your hit is tied to amplitude or the cutoff frequency of a non-resonant low-pass filter, or of a resonant band-pass filter. It’s therefore very accessible and surprisingly expressive, as delays go. 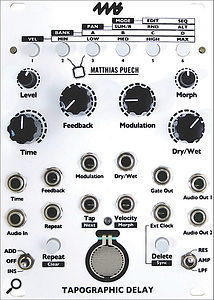 Size: 18HP. Current: +12V = 125mA, -12V = 32mA.Perhaps because I mounted the module vertically, my first attempts to bang in patterns were not shining examples of timing accuracy. Fortunately, I was able to try firmware version 1.1, which introduces a quantisation of taps to any incoming external clock, negating my embryonic plans for an angled case or up-facing skiff.

The Tapographic Delay has two feedback paths, and in the first the sum of all taps are summed back into the mix using the Feedback knob. Depending on the spacing of your taps, judicious application of feedback can soon turn a few random echoes into a pleasant, reverby mulch. Feedback’s range stretches from zero to 120 percent and, although a soft saturation effect is applied, mid to upper values can still generate quite a cacophony, depending on the tap amplitude, ringing effects of the band-pass filter and the number of active taps.

The second feedback path is switched in by the Repeat button (or trigger input) and once active, the tap with the longest time is looped without degradation, a feature designed to be flipped on and off at will during performance. A long press of the Repeat button clears all current taps (ie. the ‘tapography’), putting you back to silence prior to starting again.

A three-way switch determines how new taps should be added, within the constraints of 174 seconds or 32 taps. Make a mistake and you can wipe the most recent tap with a nifty button press. Should you exceed the maximum number, the oldest taps are replaced; you can tell this is happening because the top row of indicator buttons turn purple. Alternatively, taps may be inserted within an existing tapography, without disturbing the current length.

It’s a very slick manual process, but if your fingers aren’t as responsive as you’d like, a sequencer can enter the taps instead. To test this out, I connected the gate and velocity outputs of my master sequencer (a Sequentix Cirklon) to the Tap and Velocity inputs, cleared the existing taps and let rip. The results were unlike anything achievable by my other delays. Ultimately, whichever way you get them in, intricate echo patterns and precision grooves can be recorded and replayed on command.

As each tap plays back, a short pulse is delivered at the Gate output. Therefore, a neat secondary function for the module is as a source of funky, trigger patterns, quantised or otherwise. I had endless fun clocking a Moskwa Rotosequencer from these, routing the sequencer’s CV output back to the Tapographic Delay to set specific time divisions for each step. As the CV inputs are bi-polar, sending a positive value adds to the associated knob’s value, a negative value subtracts.

If you turn the Time knob from its middle position, all the taps are either compressed into a shorter time, or extended, keeping the tap ratios consistent. Unlike the Dual Looping Delay (also from 4MS), this time-shift process releases mad flurries of shifting pitch, like some possessed or wonky tape delay. To automate this pitch wobble, a single modulation control introduces LFO modulation to each tap individually. It’s an effective combination of two controls — modulation amplitude and rate — ripe for performance tweaking.

The action of holding down the Delete/Sync button for more than a second instructs the Tapographic Delay to sync its taps to an incoming clock. Synchronisation is your path to remarkably detailed, intricate patterns, weird syncopations and ratcheting effects. In this mode, the Time knob selects time divisions/multipliers ranging from 1/8 all the way through to 16x.

There are four banks of six locations to store your unique tap patterns. Sensibly for live performance, these ‘tapographies’ don’t include the knob positions, just the timing and panning of the taps, along with their velocity and mapping to amplitude or either filter. Once you’ve stored several creations, they can be selected directly with the six clear buttons along the top. The transition to a new tapography is governed by the Morph knob, which offers a maximum transition time of around 12 seconds.

Morphing between stored values opens up a universe of cascading echoes, especially given the scope for per-tap variations of filter or amplitude. I’d recommend a lengthy afternoon session or three to experience this, perhaps with a few mild intoxicants and some kind of recording device handy. It’s even possible to automate the transitions by slipping the unit into ‘SEQ’ mode. This puts the selection under the control of an external pulse received at the Next input, with the Velocity/Morph input providing external control over the morph time. Sequenced movement is either forwards through the bank, completely random or has a random chance of changing to the next or previous location. The only downside is that every location in a bank is eligible — you can’t (currently) restrict the sequencing to a few favourite patches.

This is a mono-in, stereo-out module with limited scope for specifying the panning of each tap. You can either place taps randomly in the stereo field or have each one entered alternately between left and right. The menu system is shallow and easy to navigate; it offers bank and mode switching, the fine-tuning of velocity behaviour and an option to tweak the output routing so the second output is dedicated to the Repeat loop.

I’ve been a huge fan of delay ever since getting my first tape echo in the late 1970s. As such, it’s still a thrill when someone produces yet another take on the theme. With its long delay time and ability to store multiple complex patterns then morph between them, the Tapographic Delay could be your go-to module for intricate grooves. That it can also generate dense and shimmering reverbs and filter effects too is a bonus. Admittedly, some features have been simplified to keep the interface clear of clutter, but the choices have produced a unique, performance-oriented instrument that puts control where it counts. Caution: can be seriously addictive.