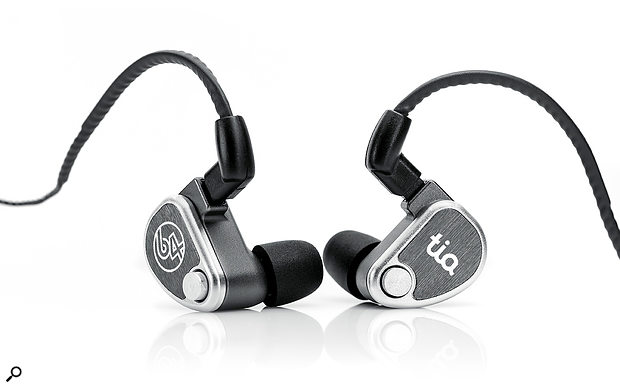 While not entirely ubiquitous, in-ear monitoring is a commonplace solution for both pro and amateur stage performers' foldback requirements. Most IEMs use one or more 'balanced-armature' (BA) transducers, which comprises a tiny bar balanced about a pivot at its centre — hence the name. A permanent magnet creates a magnetic field which allows the bar to oscillate when an audio signal is passed through a coil of wire wrapped around one end of the bar. A lever attached to the other end transfers its movement to a diaphragm, generating the acoustic output.

Balanced-armature drivers are very power-efficient but have a restricted operating bandwidth, and so high-quality applications generally employ multiple BAs, each optimised to reproduce a different part of the frequency spectrum. Consequently, two, three or four-way systems are quite common. However, the subject of this review is 64 Audio's U12t in-ear monitor, which has 12 — yes, 12 — BAs in each earpiece. And if that's not impressive enough, the company also produce an 18–BA model!

64 Audio — formerly known as 1964Ears — are a family-run business based in Vancouver, Washington, and have been operating for about eight years now, producing a range of in-ear monitors suited to studio, stage and audiophile applications. The studio and stage models are designed to work with personalised custom ear moulds, while the audiophile models have universal-fitting push-on foam and silicon ear tips. However, the various bespoke technologies involved in the company's transducers are shared across the different ranges, which start with a two-driver system for £499 and extend up to an extraordinary 18-driver system, for £2999. There are also a couple of very special audiophile four-driver models costing over £3500.

For this review, I was sent the quite reasonable (in comparison!) U12t, model costing 'just' £1999. This is from the audiophile range and features a 12-driver design with universal ear tips; the studio and stage version of the same unit is called the A12t and it costs exactly the same. In fact the only differences between the U12t and A12t models are the custom ear moulds instead of removable universal ear tips, and different warranties. The A12t comes with a 30-day fit guarantee for the custom ear moulds, and a 24-month warranty on the earphones themselves, whereas the U12t model has only a 12-month warranty.

Incidentally, for the custom ear moulds, standard impressions are taken by your local audiologist in the usual way and sent to 64 Audio, where the impressions are scanned, edited as necessary, and then the bespoke earpieces are 3D-printed and fitted to your personal A12t earpieces before they are shipped.

64 Audio's U12ts are shipped in a large, sleeved cardboard presentation box with that soft-touch finish that all expensive hi-tech products seem to use these days. Inside the box is a precision-cut foam liner which displays the aluminium-bodied earphones complete with a 48-inch (1.2 metre) 'premium' cable, a cardboard panel holding six pairs of ear tips, and a compact but tough plastic protective carrying case for everything. The removable ear tips are in small, medium and large sizes, and in two forms identified as 'TrueFidelity' (foam) and a slightly bulkier Silicone.

The cable is detachable, terminating in a pair of tightly fitting two-pin plugs, while the cable itself comprises four plaited silver-coated copper wires with stiffened sections to wrap over the top of the ears. A sliding grip holds the wires from each earpiece neatly together at the back of the head, and the other end of the cable terminates in a chunky 90-degree, gold-plated 3.5mm plug.

The handy storage case contains a dehumidifier (a small retained pot of desiccant), a double-ended cleaning tool (with a pick at one end and a brush at the other), a collar clip to secure the cable to clothing, a pair of alternative 'Apex' modules (more on those in a moment), and holders for spare ear tips. All in all, it is a very nice kit of parts, and every item feels well made and robust.

64 Audio promote three key technologies in the U12t/A12t. The first is called TIA or Tubeless In-ear Audio, referring to the company's 'open' balanced-armature design which omits the usual tube and dampener arrangement. The aim is to allow the diaphragm to radiate in an unobstructed way, reducing resonances and improving fidelity. Each group of BAs in the U12t/A12t are housed in individually optimised chambers, and their acoustic outputs pass into a large-bore output tube, with the high–frequency BA sitting directly within the tube itself to provide the most accurate high-end response.

A second bespoke technology is called LID or Linear Impedance Design. A passive crossover is employed to split the input signal into four bands to feed the various groups of BAs, and the circuitry's almost perfectly flat impedance curve presents an easy load to the headphone amplifier, maximising its performance and maintaining a consistent sound quality.

I mentioned Apex (Air Pressure Exchange) modules earlier, and this third technology is an acoustic vent on the outer surface of the earpiece directly opposite the ear canal tube. This vent couples the outside world and the ear canal, and its primary purpose is to release pressure inside the ear canal, which is claimed to alleviate listener fatigue and make the in-ear monitors more comfortable to wear over long periods. However, a vent of this kind inevitably allows some external sounds to be heard too — much like open-backed headphones. The company suggest this is beneficial as it provides a more comfortable and natural experience in general, and allows stage performers to be more aware of audience reactions.

However, the Apex vent is not a simple open tube; it's actually a replaceable acoustic attenuator. The U12t came fitted with grey m15 (-15dB) attenuators, but stored in the travel case is a pair of silver m20 (-20dB) attenuators which can be used instead, if preferred. Exchanging the modules is as simple as pulling out the current attenuators and pressing the new ones back in... while trying not to drop and lose them, because they are tiny! They seem perfectly secure once installed but, if lost or damaged, replacements of either type are available ($99.99), as are replacement ear tips, cables and all the other accessories.

The U12t is quite a chunky-looking earphone in the box, but that's not really surprising given it has to accommodate 12 balanced-armature transducers. The left/right identification, serial number and model type are all printed on the earpiece's inner surface, while the outer surfaces carry logos for 64 Audio on the right ear and TIA on the left, making it easy to identify which earplug goes in which ear.

So what do all those BAs do? Well, one provides the high end while a second reproduces the upper-mids, both firing straight into the output tube. A stack of six more are mounted side-on inside the earpiece and work together on the lower-mid frequencies, their combined output being guided through a tube to the output, while another group of four larger units positioned alongside handle the low end. The passive four-way TID crossover presents a nominal 12.6Ω load impedance, which remains within +1/-2 Ω between 10Hz and 20kHz. The unit's nominal sensitivity is 108dB/mW.

Performance of the U12t, as with all IEMs in fact, is highly dependent on finding the correct ear tips to suit your own ear canals — bearing in mind that left and right might need to be different sizes! But after experimenting with the sizes and types on offer I eventually settled on the small TrueFidelity foam tips for both ears. Inserting the earphones is very straightforward and they felt reassuringly stable and secure despite their bulk, with the signal wires wrapped snugly over the top of my pinnae and held in place at the back of the head by the sliding grip. I found the U12ts very comfortable to wear, and not heavy at all, and I was genuinely surprised at just how snug and secure they were — almost as good for me as proper custom moulds, which is impressive.

The clothes clip attached to my collar proved a useful accessory, isolating the wires to the earpieces from any cable tugs while I moved around. I found the standard cable easily long enough to reach an IEM receiver (or music player) in a back pocket, but not too long as to leave a large coil of wire to hide away, and I didn't have any issues at all with mechanical (rustling) noises travelling along the cable. A longer cable is available as an optional accessory if required.

Assuming correctly fitting ear tips — or good ear moulds for the A12t version — the level of external sound isolation is extremely good with the m15 Apex modules in place, and I think it would need to be a very loud stage before the m20 modules became a better option. Relatively little bass makes it through the attenuator, but that's not really a problem in practice. Having said that, although I mostly stuck with the m15 module, I did notice a change in tonal balance when I substituted the m20 module, which seemed to admit more low end and hold back the highs slightly — similar to the action of a 'tilt' EQ.

The precision and balance of the low end is astounding, and so clean that it doesn't cloud the mid–range in the slightest...

The quality of sound reproduced by the U12t/A12t is — as you would hope, given its price — of an extremely high standard. It has a wonderfully transparent and neutrally balanced mid–range, impressively powerful and extended lows, and a detailed and airy high end. Vocals are presented very naturally indeed, with no harshness or edginess at all, and all harmonically complex instruments like pianos and guitars, and even orchestral strings, all came across in a very natural and involving way. Drums — and anything with percussive transients — are detailed, rich, solid-sounding, and dynamically accurate with effortless headroom. The precision and balance of the low end is astounding, and so clean that it doesn't cloud the mid–range in the slightest, while the high end isn't hyped at all — a point I found very satisfying, as many IEMs I've tried seem overly bright in an effort to appear detailed.

Assuming perfectly fitting ear tips (or having well-made custom moulds), the low end is amongst the most impressive I've heard from an in-ear monitor, and I've rarely heard such natural weight and solidity in bass and kick drums. 64 Audio suggests the Apex vent plays a critical role in this aspect of sound reproduction, but whatever the reason, they've certainly got it right in this design.

Stereo imaging — such as it can be in headphones of any type — is accurate and stable, while listening to binaural material was unnervingly real, with enormous depth to the sound stage. Perhaps more importantly, complex mixes are presented with great clarity and different instruments are presented with excellent separation, making it very easy to hear exactly what's going on — obviously a key strength for on–stage monitoring.

Despite the complexity of 12 separate drivers and four-way crossovers, the 64 Audio U12t presents a very well integrated and beautifully balanced sound spectrum oozing in clarity and detail, but with real weight and body. Two grand is a heck of a lot of money to spend on in-ear monitors, but there is a quality here in the physical construction as well as the sound itself that is really quite tangible.