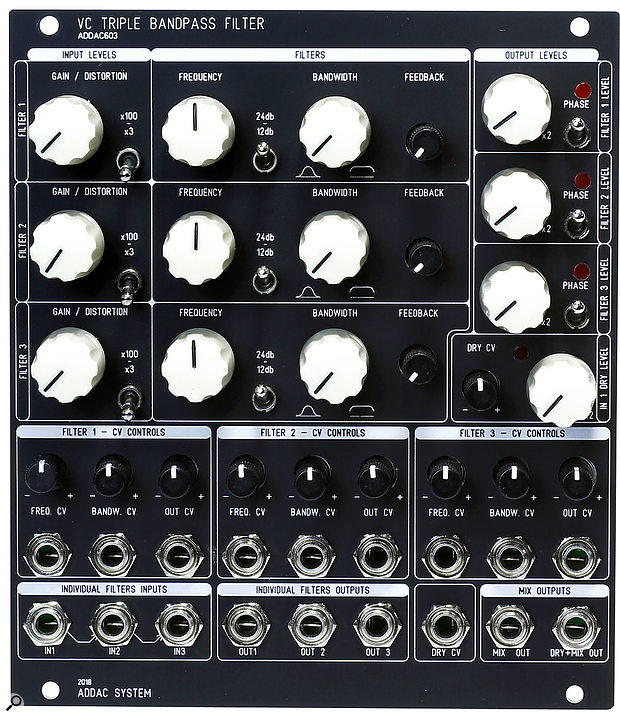 The classic triple band-pass filter has been around a long time. Doepfer and Analogue Systems had them long before the Eurorack explosion. The concept goes at least as far back as 1977, when Korg released the polyphonic powerhouse synth known as the PS‑3300 (now made from pure unobtanium). Korg included something they called the Resonator, which consisted of three band-pass filters which could be tuned separately and modulated with an LFO or envelope. They allowed sounds which couldn't be easily coaxed from the more common low- and high-pass filters (although the PS‑3300 included those too). Vocal tones, formants, more realistic strings, complex sweeps and unique special effects were all easily achievable using this unique combination of band-pass filters arranged in parallel.

And so the triple band-pass has become a mainstay for those looking for filters beyond the norm. ADDAC System's take on it adds some nice touches as well as bucketloads of modular inputs and outputs. The three filters are identical. Each comprises of input gain (up to 100x gain for serious distortion), voltage controlled frequency and bandwidth, a 6dB/12dB switch and a feedback control (essentially resonance). Each filter also has its own output VCA with dedicated knob and CV input. The final option before the audio appears at the output jacks is the polarity invert switch, which can be handy when mixing the filters later in the signal chain to create different filter responses and special effects by mixing together bands with different phase relationships.

There are three individual inputs and three outputs, along with a Mix output and a Dry/Mix output. The Dry/Mix signal also has a dedicated control and CV input. The three inputs are normalled, so if you connect a signal to input 1, it will be copied to inputs 2 and 3, until a jack is inserted into those sockets, when the normalling is broken. Overall, the front panel is logically laid out and shouldn't present a problem to anyone in terms of understanding the signal flow.

Looking at an isolated single band on a spectrum analyser and sweeping the frequency it's clear that each filter's frequency range is impressive, from around 10Hz to somewhere near 16kHz, although adjusting the bandwidth seems to affect the centre frequency at the same time so it's hard to measure exactly. Suffice to say that each filter has a nice wide frequency range. The feedback is excellent as a resonance control, but won't self-oscillate. The bandwidth has an equally wide range, going from tight notch at the smallest to almost full frequency range at the largest. Having a flexible bandwidth control like this means that the filters aren't only good for zoning in on specific frequency bands, but can also be used for more broad-stroke, almost EQ-like adjustments. For example, setting the three bands to a moderately wide setting, and each filter to cover low, mid and high, will give you a kind of three band parametric EQ where the input and output gain can be used to cut or boost. Of course, boosting will also result in additional saturation, but it's useful nonetheless.

The ADDAC603 is undoubtedly a flexible device. It sounds great too. With a harmonically rich input, the three filters can be coaxed into all manner of evolving, tonally complex sounds. Classic filter bank sounds like vocal formants are no problem either. And yes, it can do a pretty good impression of the Korg Resonator (just dial in tight bandwidths and patch an LFO into all three frequency inputs for an authentic experience). With the 100x input gain switches enabled, the unit becomes a multiband distortion or, alternatively, by using wider bandwidths for each filter and easing back on the input gain, you can pass entire mixes through it and use the filters for subtle EQ boost or attenuation. I think it covers more uses than any other triple band-pass filter I've come across.

I would have liked to see a couple of extra features. A master frequency control, with CV input, to move all three frequency bands at once would have been an excellent addition. Failing that, having the CV inputs normalled in the same way as the audio input would have achieved the same thing without using up any more physical controls or panel space. It's also a shame that the filters aren't calibrated for 1V/oct (like the Analogue Systems RS-360 for example), so you can't play them musically. Not that the lack of these features is a problem, but they do exist on similar modules from other manufacturers, so worth bearing in mind.

If you're in the market for a triple filterbank, the ADDAC603 deserves to be on your list. The input distortion capabilities and wide bandwidth range set it apart from any other filterbank I know of. Its flexibility in gain structure and frequency range can sometimes make it hard to find the sweet spots, but overall it is an excellent sounding module with many uses and should prove to be a source of new sounds for anyone looking beyond the more ordinary filters out there in Euroland.