Just how different can two similarly priced closed-back headphone models be? The answer may surprise you...

We often write in these pages about the issues surrounding 'translation'. Of course, we don't mean translation in the traditional sense, from one language to another, but in the sense of audio material surviving, or hopefully thriving, when heard on a playback system different from the one on which it was created. A significant reason that we talk so commonly about translation is that, as you will probably have noticed, everybody's listening on headphones these days. It's almost as if we can divide the history of recorded audio into two epochs: before and after the iPhone. Almost as soon as the iPhone hit the streets and iTunes became mobile, the use (and sales) of headphones soared, and it shows no sign of coming back to earth.

However, it's not as if translation is a new issue. There have always been considerations of playback on, for example, radio, TV, or in-car stereos to take into account, and of course it's also not as if headphones are solely a post–iPhone invention. But headphone use out in the wild is now so prevalent that it sometimes seems to me an anachronism that those of us involved in audio and music production still monitor primarily on speakers.

It's not just out in consumer-world that audio manufacturers have noted the rise of the headphone. Here in the pro environment too, the number, breadth and range of headphones aimed at music production applications has multiplied exponentially. For example, the two newly introduced AKG headphones that are the subject of these pages are drawn from an AKG range that currently appears to number 18 different products aimed at the pro niche.

Two Of A Kind? 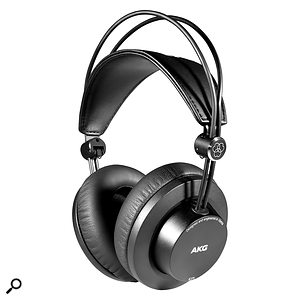 AKG K275.So, to the headphones. The K275 and K371 can be found towards the bottom rungs of AKG's headphone ladder and are priced very similarly; for what it's worth, the K275 is the slightly more expensive, but really they are direct competitors. They are also both passive, over-ear (circumaural), closed–back designs offering good isolation from external sounds and low acoustic leakage from inside to out, so they are both potentially suitable for tracking as well as mix applications. Their specifications are not all that different, either, although the K371 boasts an apparently more advanced titanium–coated 50mm diameter driver, and has 5dB higher sensitivity. It also has a wider specified bandwidth of 5Hz to 40kHz, against 16Hz to 28kHz for the K371, and is slightly lighter at 255g against 295g. Both headphones are specified at 32Ω impedance, so should be easily drivable by most headphone amplifiers. (For a useful explanation of the ins and outs of headphone impedance, you can't do much better than our October 2019 headphone impedance feature: https://sosm.ag/impedance.)

Both headphone models feature detachable cables, with the K371 including three different cable options: 1.2m and 3m straight cables, and a 3m coiled option. The K275 cable is a 3m coiled item. The cable connection to the headphones, via the left earcup in both cases, is achieved via a neat, latching mini-XLR type connector. The common connector meant I could use the K371's straight cables on the K275. I've never really made friends with coiled headphone cables, and I kind of wonder what the point is, but I know some folks like their headphone cables coiled, so do feel free to disagree with me. At the other end of the cables on both headphones are the expected 3.5mm jack plugs with screw-fit 6.35mm jack plug adaptors. The adaptors seemed perfectly fit for purpose but I wonder if, for pro applications, the default, soldered, jack plug shouldn't be the 6.35mm one with the 3.5mm option available as an adaptor. While I'm on the subject of removable items, both headphones also have removable, and presumably replaceable, ear pads. 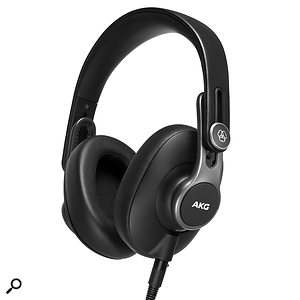 AKG K371.Both the K275 and K371 are advertised as foldable, in that their earcups can be folded into the space underneath their headbands for convenient mobile use. The earcup fold works somewhat differently on each model, however. On the K275, the cups fold inwards from a magnetic hinge located where the headband becomes the earcup arm, while on the K371 the earcup and arms rotate 180 degrees against a click-indented pivot. The K371 option seems neater and preferable to me, and also results in a smaller folded item, but it does require the connection cable to be detached for the most compact result.

Aesthetically, and in industrial design terms, the two headphones are significantly different. The K275 looks a little dated to my eyes, with its metal–frame headband and minimally padded 'leather' strap. Perhaps my reaction to the look was supposed to be 'retro' rather than dated? The K371, again just to my eyes, looks a more contemporary and thoughtfully resolved piece of industrial design. There is significantly more plastic involved in the K371 than the K275, but both models are unremittingly, conventionally and slightly disappointingly black in appearance.

As far as comfort is concerned, the K371 was an easy winner for me. I've learned over many decades of headphone (and hat!) use that although my head is generous of circumference (hats are invariably too small) my ears are located higher up than average (it's my elvish ancestors, probably). So, with headphone adjustment, I always find myself towards the limit of the available upward earcup movement. This was fine on the K371, but on the K275, not only would the earcups not really adjust far enough upwards, they wouldn't stay in position. Part of the problem on the K275 is the style of spring-loaded strap adjustment. The spring loading doesn't seem quite strong enough to support the weight of the headphones. This might not be such an issue for those with more typically positioned ears (or perhaps less flattened skulls), however a couple of family members I roped in to a headphone comfort test also preferred the fit of the K371. Another aspect of the K371 that seems to help its comfort is its oval — or maybe elliptical — earcup profile. This seems generally a better fit than the conventional round profile of the K275, although it did perhaps begin to cause a slight comfort issue in combination with reading glasses. Speaking of weight, as I was a sentence or two back, my kitchen scales had the K371 at 280g against 310g for the K275 (25g heavier than the specified weight), but the difference didn't feel particularly significant. A quick weight check of a few other pairs of headphones, including my trusty old pair of Sennheiser HD600s, suggested that 300g, give or take 20g, is pretty typical.

Listening to the K371 was close to a revelation, as it seemed to display very little of the signature closed-back headphone character.

So, how do the the K275 and K371 perform? Well, the headphones I'm most used to are the aforementioned Sennheiser HD600s, which are of course an open-backed design, and perhaps partly because I'm so familiar with the open-backed sound, my immediate response to the K275 was that it had the slightly 'shut-in' and coloured character that to my ears is typical of closed-back headphones. It also seemed to display a mild nasal signature in the upper mid–range, and lack a bit of detail and precision at low frequencies. I noticed this particularly on double basses. This is all relative, of course, because in many respects the K275's audio performance is fundamentally perfectly usable in its intended role. Its bandwidth is extended, its isolation from external sound is good (as is its leakage the other way) and its tonal balance is adequately neutral — although, having said that, the difficulty I found in getting them to stay put on my ears meant that its balance tended to vary. The K275, however, has one major problem to my ears, and that's the K371.

Even with the 5dB sensitivity difference between the two headphones adjusted for, listening to the K371 was close to a revelation, as it seemed to display very little of the signature closed-back headphone character. The sense of increased openness and clarity over the K275 was really noticeable, as was the low–frequency precision and detail that I felt the K275 missed. Maybe it's the apparently more advanced driver of the K371 that makes the difference, or that the K371 incorporates AKG's Reference Response Tuning, but whatever the technical reason behind the difference between the two headphones, the result is significant. As with the K275, I was very happy with the K371's basics of bandwidth, isolation and tonal balance, but it seemed to provide a significantly enhanced level of uncoloured clarity that bordered on the genuinely beguiling, and that's a definite result for a relatively inexpensive pair of closed-back headphones. The fact that the K371s were also pretty comfortable to wear for extended periods just makes their case even stronger.

So, in the battle between the two it's a definite win for the K371. Having said that, I don't feel that it's a win for the K371 because the K275 is particularly poor — it's more that the K371 is, I think, particularly excellent. Perhaps, though, the important point to take away from this is that you never really know headphones until you've tried them. On paper the K275 and K371 might look relatively similar; in use, however, they sound and feel decidedly different.

One manufacturer, two similarly priced headphones, but two very different experiences. The K371s are excellent but sadly the K275s, to my ears and head shape, are not quite so successful.