High-quality audio interfaces with built-in DSP are becoming increasingly popular and, alongside products such as Universal Audio's Apollo range or the Pro Tools HDX system, Antelope Audio have become one of the prominent players in this marketplace. The most recent addition to their product range is the Orion Studio Synergy Core, so if you have the budget, is Antelope's latest take on a multi-channel audio interface with DSP a worthwhile investment?

Sam Inglis reviewed Antelope Audio's Orion 32+ Gen 3 device in the SOS September 2019 issue, and the Synergy Core shares some of that feature set (including Antelope's excellent clocking technology). However, I suspect the balance of features here — and in particular the inclusion of 12 high-quality preamps — may give the Synergy Core a more obvious appeal for many potential purchasers. The Synergy Core supports both Thunderbolt 3 (and is backwards compatible with Thunderbolt 2 via a suitable adaptor) and USB 2, with the former giving 32 audio channels to/from the computer and the latter 24. Aside from the 12 preamp inputs, you also get twin headphone outputs (on the front panel), 16 line outputs (on two DB25 connectors at the rear), two pairs of unbalanced monitor outputs, S/PDIF and ADAT (twin ports for both in and out) connectivity, two insert points and, on the front panel again, two outputs dedicated to re-amping. There is also a talkback microphone integrated into the front panel.

As elsewhere in the Antelope Audio range, the audio connectivity and AD/DA conversion comes with top-notch specifications. For example, the dynamic range of the mic preamps is stated as -121dB while the A–D and D–A converters offer 124dB and 128dB respectively. If those few extra dB are required, rather neatly, you can bypass the preamps using a 'direct' option. The four front–panel preamps have Hi-Z input switching, while mic level, line level and phantom power options are supported on all 12 analogue inputs.

The rear panel houses eight of the 12 analogue inputs.

In terms of the DSP power, the Synergy Core combines two of AA's proprietary Field Programmable Gate Array chips and six ARM-based DSP processors. With 32 audio channels, and eight effects slots on each channel, you could imagine a mega-tracking session featuring 256 effects instances. In practice, there are some limitations and you can only initiate limited numbers of some plug-ins. For example, you can only operate four guitar amp models at any one time and 16 instances of some compressors or EQs. I'm not sure exactly how the DSP resource allocation controls these various numbers, but it is obviously something to be aware of and it would be useful to see further technical information available to potential purchasers on AA's website or in the documentation.

The Synergy Core comes bundled with 50 effects from AA's range. These include some more generic offerings but also an impressive collection of 'vintage' emulations that pay homage to some obvious classic hardware. This includes a couple of nice preamp emulations, the Auraverb reverb and various compression, EQ and guitar/bass amp/cab modelling options. There are additional plug-ins you can purchase via AA's website but, for many routine tracking, mixing and even mastering tasks, there is plenty to work with here.

At the time of writing, AA also include two significant bonuses; the Auto-Tune Synergy plug-in (normally €249) and an Edge Solo modelling microphone (normally €499). Given that the former operates in real time via the Synergy Core's DSP, it can be used 'live' should your vocalist require a little confidence boost. The Edge Solo gives you access to AA's microphone modelling technology via analogue inputs 5 to 12 so you can emulate the sound of a list of classic microphones. I only had access to the interface itself for this review, but these two additions add considerable value. 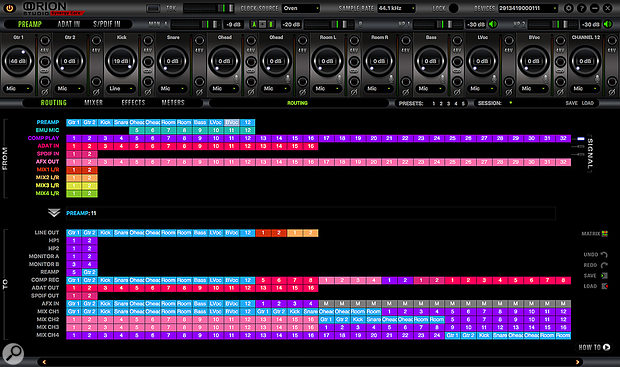 The Control Panel's Routing tab provides tremendous flexibility but comes with something of a learning curve.

The other key element of the package is the Control Panel software, and it is important to note that this is central to realising the potential provide by the impressive hardware features. As well as comprehensive metering, configuring of the plug-ins when recording, and options to configure up to four different monitor mixes, it is also the key to routing your audio signals through the hardware/software platform via the Routing tab. The latter is impressively flexible but do expect a bit of an initial learning curve. The concept is not unlike that of a physical patchbay — however, despite the useful colour coding, and the option to add labels, it is still sometimes difficult to visualise quite what is connected to what. Thankfully, if you have a number of (perhaps complex) routing configurations for different tasks, these can be stored as presets. Indeed, the hardware itself can hold up to five presets for instant recall if you do want to use the unit 'on location' without a computer.

The Effects tab allows you to configure all your audio input channel effects options using the range of included plug-ins.One additional item that I did have access to for the review is the AFX2DAW plug-in (an additional purchase at €195). When tracking, the Control Panel's Effects tab provides all the effects configuration options you need. However, the AFX2DAW plug-in provides you with easy access to the Synergy Core's DSP/plug-in power directly from within your DAW while mixing. On my Thunderbolt 2-equipped Mac (I had to use Apple's adaptor to connect to the Synergy Core's Thunderbolt 3 port), this worked very well but, as noted below, there are some limitations to be aware of.

Antelope have hit a genuine sweet spot with the Synergy Core's hardware feature list, which could give it very broad appeal.