The ADDAC611 is not your typical filter. It is noisy, rough and sometimes violent, the Peaky Blinders of filters. This of course is entirely intended. The filter design was originally by fringe Danish synth manufacturer Gotharman. It was used in Gotharman's own Tubaz Filter module, which is no longer in production, but ADDAC System have partnered with Gotharman, not only to save the design from obscurity, but to add a few extras along the way. 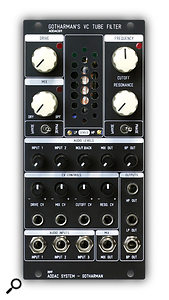 ADDAC611 Gotharman's VC Tube Filter. Size: 12HP. Current: +12V 90mA, -12V 60mA.At the heart of the 12HP is a genuine vacuum tube, visible through the circular grille cut out from the centre of the front panel. Different tubes are used during manufacture and, as a result, no two modules will sound identical. They are all genuine 1970s components because everything from the 1970s sounds better, right? They are certainly not audiophile tubes, but cheaper old stock with all the imperfections, distortion and phase-shifting that ensues.

Audio goes in via one of three audio inputs, which are mixed together using dedicated gain controls for each. Input 3 also contains a feedback circuit which, when no input is plugged in, will introduce the filter output back into the input again, allowing for further grunge, saturation and feedback tricks. After that there is a drive stage, with dedicated knob and CV input with attenuvertor. Then the audio goes to the filter, which has cutoff and resonance controls, again with CV inputs and attenuvertors. There are individual outputs for the high-, low- and band-pass, as well as a mix output that combines the band-pass with the dry signal. There is a master gain control to set the level of the mix output and also one for the band-pass output. Curiously, the low-pass and high-pass outputs can only be levelled using screw-driver trimmers on the front panel.

There's a good deal of gain structure built into the design; a gain control on every input, plus the filter drive to add more gain to the filter input mean that you can quickly summon outright brutish distortion. However, with the gain and drive set to moderate levels, the filter character can be reasonably analysed. The low-pass output has a great dark quality to it and the band-pass is not really like any you might be used to. It still retains most low frequencies even at its highest setting. And the high-pass is frankly... rude. The resonance can turn into a banshee and needs careful adjustment if you value your tweeters. It is not a precise resonant peak at a precise frequency. Instead it sounds a bit like guitar amplifier feedback; a howl with its own life-force.

The ADDAC611 tube filter is a bit of a bruiser. It offers all the grit and filth of old tubes, but it gives you plenty of control and options along with it.

One interesting addition is the ability to flip the phase of the band-pass and mix outputs separately. On the face of it, this doesn't seem particularly useful. Flipping the switches won't result in any audible change in the sound until you mix signals externally. For example, take your dry signal, plus the same signal through the low-pass output and mix them together using an external mixer. Now, when the phase of the low-pass signal matches the phase of the dry signal, you'll get the sum of the two signals, resulting in a boost in the low frequencies, somewhat like an EQ. But invert the phase of the low-pass signal and you get something like a high-pass filter. This is because the low-pass signal cancels out the same low frequencies in the dry signal due to phase cancellation. All that's left is the high–frequency content. By combining different combinations of filter shapes with a dry signal, you can create different filter responses. Try combining the inverted band-pass with the un-inverted dry signal for a band-reject filter. These tricks will work with any filter, but you need some way to flip the phase. ADDAC System have kindly supplied that. Of course, because this filter is tube-based, there are phase issues inherent in the design, so phase cancellation is not scientific or precise, meaning frequencies can bleed through even when they shouldn't, all of which just adds to the rugged charm.

Make no bones about it, the Gotharman Tube Filter is a noisy beast. Remember, the tubes are not from elite stock so there is a great deal of noise even with no input, and the various gain stages will only add to it. If you're happy to embrace this, you will be rewarded with buckets of savage character. The input drive can add some real grit to any signal. It sounds superb on drums, adding both glue and dirt simultaneously. Synth sounds take on a dark, intimidating edge. But that background noise will always be present, so much so that I would advise sticking a gate somewhere downstream.

The ADDAC611 tube filter is a bit of a bruiser. It offers all the grit and filth of old tubes, but it gives you plenty of control and options along with it. Triple inputs with gain controls means you can use it as a three–channel mixer. There's plenty of CV control, all with attenuvertors. Then there's the multiple filter outputs. All of which add up to a very capable filter module which has a gruff and characterful sound. This filter isn't just a bully, it's a criminal mastermind, not afraid to do its own dirty work. A pre-existing penchant for noise, however, is probably wise.