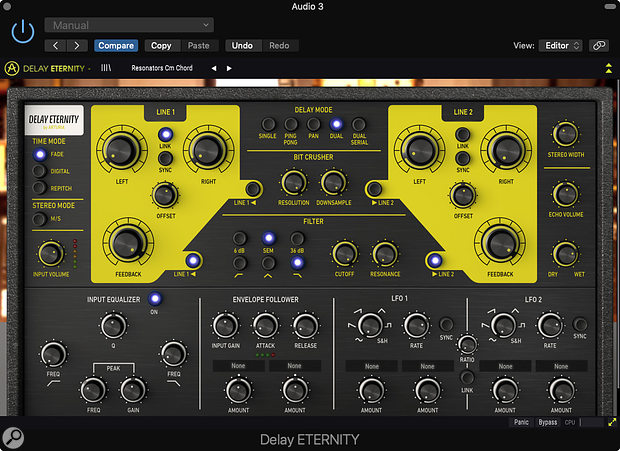 Eternity, unlike the other delays in this bundle, is an original design, rather than being modelled on classic hardware.

Arturia have already produced a few bundles in the 'Effects You'll Actually Use' series and this time they've turned their attention to delays, offering us three software options: one an original design, and two modelled on classic hardware, but with some enhanced features you won't find on the originals. All the usual plug-in formats are supported on Windows and Mac OS, and all three plug-ins support mono or stereo operation.

Eternity (pictured) is a modern dual digital delay line, with extra processing to treat the delay after each repeat. Unlike the other two delays in the set, this one is entirely original, and it was designed as a creative sound-shaping tool rather than as a simple echo box. The delay section looks conventional enough, but we also get resonant filtering, bit-crushing and assignable modulation parameter controls that can range from subtle pitch variations to granular-style effects.

The yellow portions of the GUI show the main controls for each delay line, and there's an Offset control that introduces timing variations between the two delay lines to introduce a little organic looseness. There's host tempo sync if you need it, along with the usual controls for Delay Time, Feedback, Echo Level and a master Wet/Dry balance. There are five distinct delay modes, which are tagged as Single, Ping Pong, Pan, Dual and Dual Serial. Pan starts off the delays in the centre and then lets them drift further left and right after each repetition. Below the delay mode panel is the bit–crusher, which does what you'd expect — it adds some inharmonic, distorted nastiness to the delayed sound. Bottom centre is a resonant synth-style filter, with 6, 12 and 36 dB/octave modes and a choice of low-, high- and band-pass types. Filtering and bit–crushing can be applied to just one delay line or to both of them.

All three plug-ins offer the option of Mid-Sides processing, which applies one delay line to the Mid signal and the other line to the Sides signal, so that it affects sounds panned left and right. There's a stereo width control in the output section, but click those innocuous double green arrows in the top-left corner and another panel drops down, exposing a parametric EQ that comes pre the delay input, an assignable envelope follower section that just begs to be routed to the filter cutoff frequency, and two LFOs with a choice of waveforms (including Sample & Hold). There are some impressive cross-modulation capabilities, with the available envelope and modulation destinations being chosen from drop-down menus. By careful use or abuse of the LFO and envelope mod sections, the delays can be made to sound smoothly modulated or glitchy and granular. Fortunately, a large range of presets not only shows off some of the less obvious possibilities but can also be used as a learning tool, to figure out how the different effects are created.

Eternity... was designed as a creative sound-shaping tool rather than as a simple echo box.

The front panel of Memory Brigade leaves no doubt as to its muse [the EHX Memory Man], and it has quite a mellow sound modelled after the original's use of analogue bucket-brigade delay (BBD) circuitry. Memory Brigade again has separate controls for the left and right delay times, and there's also an Offset control, a host Sync switch, a choice of chorus or vibrato modulation with an amount control and a choice of Left Right, Ping Pong or M-S delay modes. You can also select the modelled BBD duration to emulate either the Deluxe or 1100 version of the original. But it doesn't stop there. Those two little arrows take us further down the rabbit hole, opening another panel hosting an input EQ with parametric mid, an assignable envelope follower and an LFO that again offers a choice of destinations, including the chorus vibrato depth. There's plenty of scope for mayhem, but the best sounds on offer here are gently modulated, silky delays.

Third in the set, the Tape-201, has a front-panel layout and title that again leaves you in no doubt whatsoever that it is modelled after a well-known Roland device. As with the hardware equivalent, the delay is based on the sonic properties of a tape loop, with all the sonic magic that brings by way of tape saturation and transport irregularities, plus there's a model of the spring reverb that graces the original, with its own level control to add a little 'wet' to the proceedings.

As with the other delays, there's separate left and right rate adjustment and host sync, plus rate offset and width control when working in stereo. The selection of head permutations is based, as per the original, on three playback heads, again with the added choice of Left Right, Ping Pong or M-S delay modes. And yes, there's a drop-down panel with extra controls, starting with a similar input EQ to that of the Memory Brigade. The next section models transport imperfections that comprise flutter (pitch modulation), motor inertia and noise. To the right is a single LFO section, again similar to that of the Memory Brigade, with a list of possible destinations covering both EQ and delay parameters. Cranking the Intensity (feedback) control right up creates a dub-style runaway delay build-up that's held back from getting too distorted and nasty, while the motor inertia keeps manual speed changes sounding suitably natural. Pushing the input harder brings more tape saturation, which can be useful in adding density to the sound.

Sonically, Eternity is definitely the most versatile delay of the three; it includes those extra modern sound-sculpting features, and I particularly like some of the filtered and modulated delay options. Memory Brigade does a good job of capturing the darker edge of the classic BBD echo, and the more subtle modulation options are lovely. Tape-201 sounds similar to the original I had back in the day — though mercifully this one doesn't need its heads cleaning every day, or have a glitchy splice! It also runs quieter unless you really must dial in some noise. All three delays are musically valid in their different ways, and between them they cover an awful lot of ground. So even though your DAW no doubt comes with delays built in, you'll almost certainly find something here that your regular delays can't deliver. So about the name of this bundle: '3 Delays You'll Actually Use'? Yep, I reckon I might...