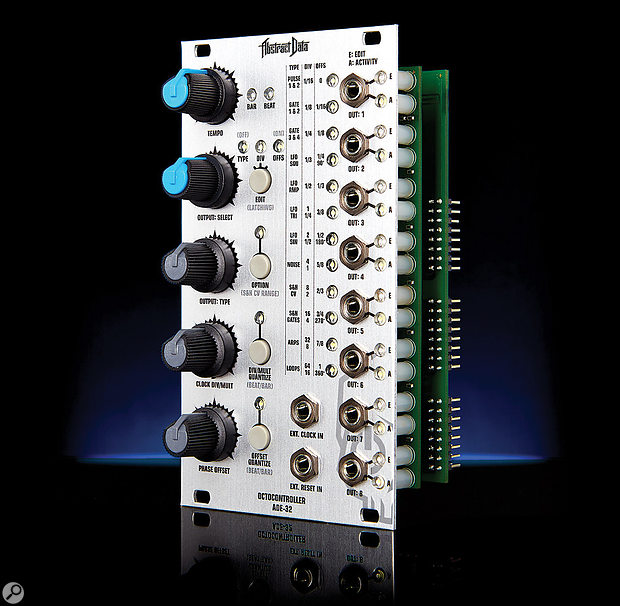 Abstract Data’s ADE-32, or Octocontroller to use its snappier monicker, crams eight assignable outputs into just 14hp. The output types offered include clock pulses, gates, LFOs, noise, arpeggios and rhythmic gate patterns, plus a couple of Sample & Hold modes for that refreshing splash of randomness. It’s no stretch at all to imagine the Octocontroller as the beating heart of any tempo-based Eurorack setup.

First impressions suggest a module to test anyone with weak eyesight; some of its text is on the borders of what I can read unaided these days, at least in a darkened room. Fortunately, while it initially looks daunting, the ADE-32 is fast and logical in use, with only a couple of non-obvious button combinations to memorise. Nevertheless, I heartily recommend that you download and read the most recent version of the manual (firmware 1.1). That way you can avoid my rookie mistake of expecting to simply connect an external clock and sync up automatically!

Configuring the outputs is a process you’ll soon be performing on autopilot. The assignments are stored in non-volatile memory, so you needn’t keep changing things — unless you want to. Turn the Output Select knob and a blue LED on the right-hand side confirms the port to be edited. Then it’s just a matter of using dedicated knobs to set the desired type, clock division/multiplier and phase offset. Adjacent buttons offer options to extend each type’s capabilities or remove the quantisation that otherwise restricts numeric values to those shown on the panel. Ordinarily, a lit white LED indicates the selection, but when quantisation is turned off, the LED flashes faster when approaching the preset values. Should you forget what any particular output is doing, repeated presses of the Edit button will step through the current settings, again with LEDs confirming. And in a further attempt at clarity, LEDs next to every output provide a real-time activity display.

With so many outputs and a single set of controls, it’s nice that Abstract Data have considered details such as whether the knobs should react as soon as they’re turned or wait until the currently stored value is reached. Similarly, you decide whether updating time-related values will kick in right away or at the start of the next bar.

A total of 12 different output types are available to mix and match as required. These are: pulses, two gates (of varying widths), four LFO waves (square, saw, triangle and sine), noise (digital, in two colours), random CVs, random gates, arpeggios (10 patterns of four notes) and loops (10 gate patterns of 16 steps). Each has a further option, such as inverting LFO waveforms, changing gate widths or progressing through a list of choices, eg. those arpeggios and gate patterns.

The Bar/Beat LEDs provide an ongoing visual metronome. Internally, the Octocontroller thinks in 16-bar cycles and the keen-eyed will notice a slightly longer flash on each restart. The list of available divisions stretches from 16th notes to a full 16-bar cycle, with triplets included on the way — the reset input can break this into less ‘normal’ intervals if required. The supported tempo ranges are from 20 to 270 bpm, and while the outputs are always subject to tempo, turning off quantisation gives a passable impression of free-running LFOs.

The list of potential applications is huge, but I’ll suggest a few to set the scene. Naturally, the Octocontroller can provide eight separate clock signals each running at wildly different divisions, but being able to offset any of these in phase proves to be awesome for shifting and sliding patterns against each other (eg. moving hi-hats around or making snares late). There’s no built-in swing function, but if you’re prepared for a little external mixing, you can blend two outputs — one for the odd beats, another for the evens. Via those unquantised phase offsets you can then indulge in a much finer swing adjustment than is usual.

As with most things modular, a spot of lateral thinking goes a long way and the same applies to sync’ed LFOs, random gates and any combination of output types you care to try. A sawtooth LFO slowly opening a filter over 16 bars in sync with a fast random burble and a looser sweep of a reverb decay was probably my first ‘wow’ moment. Don’t be surprised if, within a few hours, the ADE-32 starts to feel indispensable.

The two flavours of glitchy digital noise can be used as sources of modulation or as audio in their own right. As always, Sample & Hold will cough up ever-changing voltages and gates but there’s an extra twist: pressing the Option button toggles looping. When it’s turned on, the last bar is captured and will repeat until turned off again. Arguably this is even more valuable than the preset arpeggios and gate patterns, because there’s always something new to capture!

Although the Octocontroller is already a year old, the indications are it has plenty still to give. A recent firmware update introduced features such as the optional muting of each output, variable external clock resolution (1, 4 or 24 PPQN) and a means to manually start and stop the module when no external clock is present. The manual also refers to two expansion ports, raising the prospect of more outputs being possible in the future.

In terms of cost and real estate, eight synchronised clocks/LFOs would be pretty significant even before factoring in the other bits and pieces. In that context, the Octocontroller seems less like a fun utility module and more like a genuine bargain. The closest I can come to criticism is that its jacks are rather tight and some of us will need a magnifying glass nearby at first, but neither of those detract from the ADE-32’s desirability.