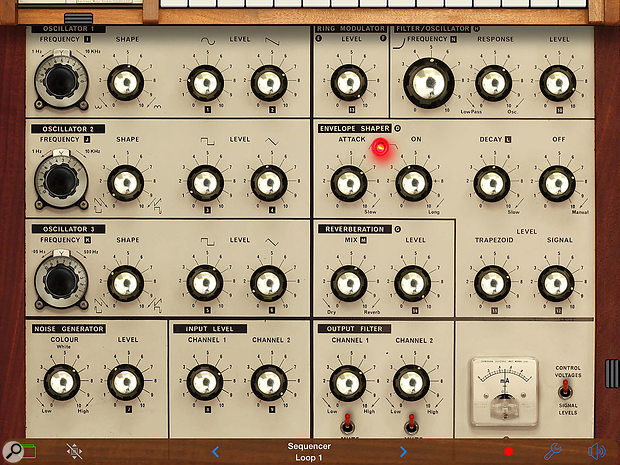 The EMS VCS3 (or ‘Putney’) is a relic of a bygone age. Along with its suitcase sibling, the Synthi, the VCS3 wibbled its way through countless classic albums and now commands a sobering second-hand price — not that many turn up for sale. Perhaps its greatest contribution to popular culture was in establishing the synthesizer as something other than a response to the lead guitar. Weird noises were always cool but the VCS3 helped turn them into an artform! The idea that an iPad can contain one seems as unlikely as it is exciting and ambitious. Yet from the friendly opening screen and its words of wisdom “Every nun needs a Synthi,” there’s an immediate sense that no detail has been left unconsidered. This is no lightweight app to be mastered in an occasional 10 minute session, but fortunately mastering isn’t necessary to enjoy it.

This detailed representation of the VCS3 comes complete with its eerie spring reverb, plus a flexible sequencer, a flanger, delay and compressor for each of its outputs, and finally a sampler/looper. It’s a complete sonic toolkit for sound design and experimentation.

The controls look and behave as expected, and for those who haven’t been lucky enough to have a real encounter, iVCS3 could be a worthwhile education. It has a deceptively simple architecture of three VCOs, a low-pass filter and a quirky approach to envelope shaping. Throw in a ring modulator, noise and a joystick and you’re already almost done. It has the distinction of being a very early stereo instrument, but the VCS3’s greatest innovation has to be the 16x16 matrix panel — a neat alternative to patch cords. Indeed, and as you quickly realise, there’s no sound at all until you plug some pins into the matrix. 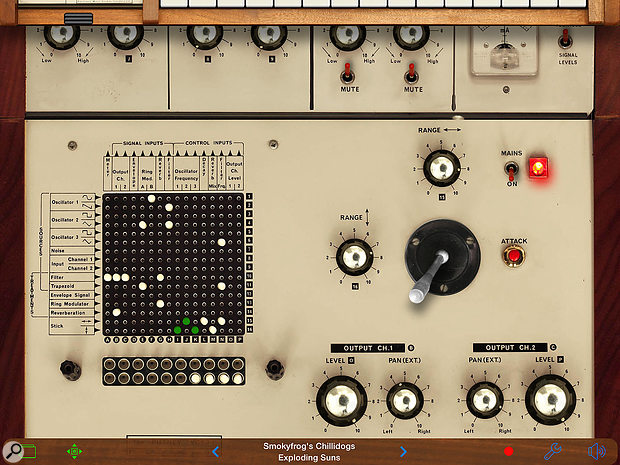 Thanks to a useful zoom, making connections on the iPad screen is simplicity itself, with the added bonus that you never run out of pins. You’re supplied with the regular white and the green ‘reduced-range’ pins, which in real life are over £7 each, putting the cost of the app smoothly into perspective. Just as with the original, apparently meaningless connections can be made and whenever you’re unsure about a modulation or audio source, you can get a visual impression via the VCS3’s handy meter — supplemented by an even handier oscilloscope on the rear panel.

The VCS3 has always been considered a random, chaotic instrument, but here a little dice icon (also tucked away on the rear screen) can scramble every parameter with a click. There are three main screens to navigate and while you’ll never truly match one of the most tactile synths ever made, the space is well-used. For example, I was glad the virtual DK1 keyboard can be tucked away when not required, which was often. Keyboard input isn’t essential to the VCS3, but if you are chromatically inclined, connecting a MIDI keyboard is better anyway — especially if it has knobs. MIDI assignment is covered in the sparse documentation, which is sweetened by a copy of the original EMS manual — a good read by itself. 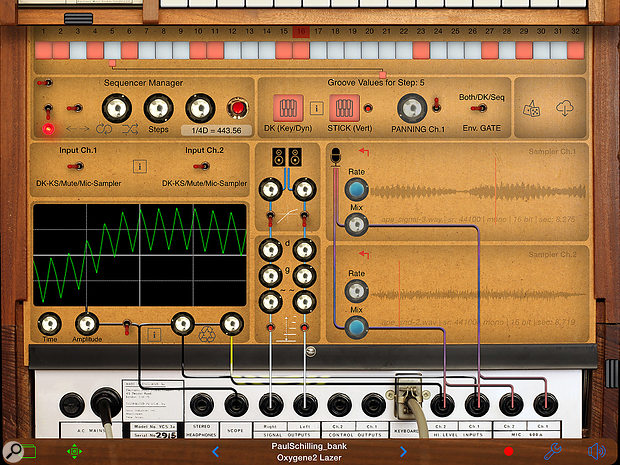 The sequencer, oscilloscope and twin-channel sampler.

I won’t try and kid you that iVCS3 sounds authentic at all times, but it’s closer than it has any right to be. Its filter even hints at that famous whistling resonance and it’s surely good enough to save your Synthi from a trip to the next muddy festival. Despite the occasional digital squeak and howl, the controls interact in a pleasing and believable manner, delivering exactly the kind of responses you expect for much of the time. Better still, you can store patches (complete with matrix connections) and then perform the otherwise impossible trick of switching instantly from the screams of a tortured space locust to regular solo or bass duties. Regular is not a concept I’d previously associated with a VCS3, but amongst the usual spooky sound effects are playable melodic examples! The sequencer is (inevitably) demonstrated by several attempts at Pink Floyd’s ‘On The Run’, and there’s a nice splurge of Jean Michel Jarre’s 'Oxygene' too.

With the full resources of a VCS3 to delve into, the sampler is a logical addition. Audio can be captured from a wide variety of sources, eg. the microphone or other apps via AudioBus or Inter-App Audio. Post-capture, you can interact by changing the samples’ playback rates, reversing direction, and so on...

At the price, it’s hard to find any serious complaints. Amongst the minor hiccups, I experienced a couple of continuous whistles that persisted even after I removed every pin. In all cases, flipping the power switch was enough to set things right. The biggest drawback is simply the amount of information you must keep in your head in order to visualise a patch. On my slender iPad Air, some of the controls are pretty small too, so thank goodness for MIDI assignment! Lastly, it seems rather hungry for battery power but perhaps that’s to be expected. That it works at all is impressive. That it works so well is remarkable. Recommended.