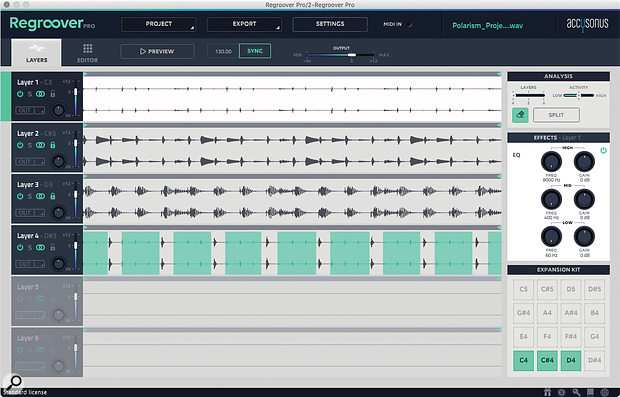 The process of splitting a loop into its constituent layers is mostly automatic, but can be tweaked by redistributing content between layers.

There are already so many ways to work with loops in your DAW — slicing, warping, retriggering, resampling, and so on — that it’s hard to imagine anyone bringing much new to the table. However, Accusonus have done just that with their Regroover plug-in, which can deconstruct or unmix loops into their component parts, rather than simply chopping them into time slices. Once separated, these layers can then be treated individually. The Pro version also allows you to pull out individual hits from the layers and build them into a sample kit that can be played separately or alongside the original loop components.

Regroover is an instrument plug-in that comes in all the standard flavours (VST, AU, AAX) and works on all the main platforms. It’s a refreshingly lightweight installation as there’s no real library, just the Alpha Pack that contains five example projects and loop sets. In general the raw material for Regroover is any WAV file, but it will be interesting to see if a market for pre-made projects and kits emerges in this format.

A fresh instance of the Regroover plug-in is a blank canvas, with a large arrow inviting you to drag in or import a WAV file. In Live and Logic you can drag a clip straight from the DAW’s integral browsers, including from the Apple Loops library in the latter. You can also drag from your computer’s filing system, but only if the DAW doesn’t hide your plug-in windows when another app has focus (as Live does). I couldn’t drag loops in from Pro Tools’ Soundbase browser, but was able to do so from the desktop. Alternatively, you can open a previously saved project, which will recall your layer settings and Expansion Kits.

Presented with a new clip, Regroover analyses the audio and splits it into four layers. You can make various adjustments afterwards, but this is always the starting point, and is the minimum number of layers. By default, the tempo is automatically detected and the clip time-stretched to match the DAW project — more on this shortly. To hear the results, you can hit the Preview button. Regroover does not automatically play back with the DAW: playback needs to be triggered on a per-layer basis using MIDI notes. Start and End Markers are provided for each layer, allowing you to set different loop lengths for each part.

The split process is somewhat mysterious. Accusonus say it uses an artificial intelligence algorithm, and it seems to separate the audio based on a combination of transients and frequency content. It observes a golden rule that “everything adds up to the original”, meaning that if you play all the layers back together without processing them, the result is the same as the original audio clip, with no phasing caused by overlapping content. Of course, isolated layers are not magically returned to their original sound sources. Some sounds may get split into multiple components, so the click of a kick drum might end up sharing the same layer as a snare, while the low-frequency thump gets its own track.

In the case of drums, and especially acoustic drums, the layers often do contain pretty good representations of the individual sounds, though if heard in isolation, individual layers sound somewhat band-filtered and also tend to have a kind of fluttery quality. The more layers that are playing at once, the closer the overall sound is to the original, which makes the default analysis very usable for things like replacing a kick sound, where you’re simply muting out one distinct layer. For other applications you can fine-tune the split process... 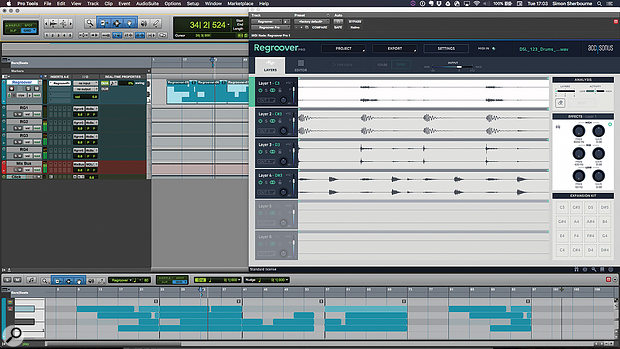 Layer playback is sequenced in your DAW by MIDI notes, and audio can be split to multiple buses.

While the layer-separation process is mostly automatic, there are a few ways in which you can influence it, and you can increase the number of layers up to a total of six. In general use there’s seldom a need to do this, but it can be useful to give you some more working space when trying to fully isolate certain elements. A second option, Activity, is a bit of a mystery. According to the manual, it allows you to differentiate between ‘busy’ clips with multiple elements or slower-changing material. A tutorial video shows it making a subtle difference to the way transient attacks are distributed. In use, I tried it at both extremes on multiple loops, but didn’t notice many differences.

The most useful user option is the Annotation Tool. This lets you identify specific bits of waveform in a layer that you wish to be removed. When you trigger a re-analysis with the Split button, the highlighted areas will be distributed to the other layers. This process can be further guided by locking other layers to prevent them receiving any new material. You can use this to ‘push’ specific sections of a layer to another, by locking all but one layer. This process is really useful, if a bit convoluted. As well as clearing things out of a layer, I found Annotation useful for reuniting bits of a sound source that had been separated, allowing you to restore the full sonic range of transient events. A variable grid mode helps with the manual editing, and a future version will have grid/transient-assisted editing to help make selections and set smooth loop points.

I mentioned already that Regroover always tempo-matches a loop when it’s first imported, based on an automatically calculated original tempo. This tempo is reported in the plug-in’s control bar alongside the Sync button. As with all such systems, this is occasionally wrong, usually by a factor of two or a half. Unfortunately there are no ‘x2’ or ‘/2’ buttons; to correct an error, you need to type in the correct tempo. To revert the loop to its original tempo you can switch off Sync.

Sonically, Regroover’s time warping is good, but there are some limitations as to how well it integrates into a DAW project. The analysis fixes the loop to a new tempo based on the current DAW project tempo. Tempo changes or maps in the project will therefore throw Regroover playback out of sync. As soon as the DAW tempo differs from Regroover, the Sync button is aware and goes dark. Pressing the button will re-warp the loop to match the current tempo, but unfortunately, this remakes the layers and resets any manual splitting or redistribution of transients you’ve worked on. In fact, analysis of the same loop at a different tempo often results in the layers being allocated differently. Accusonus say that a future version will have a real-time warp mode that will make Regroover much more flexible when the tempo isn’t fixed.

Regroover has a range of applications for both production and remixing, giving you much more creative scope than simple slicing or stretching. You can rebalance individual elements of a loop, or completely separate them. It’s easy to replace a sound in a loop without disturbing the other parts too much. And with the Pro version, you can assemble and play a kit using slices gleaned from the split layers, taking the ReCycle concept to a new dimension. Beyond drum loops, there are many interesting sound-design results to be found when splitting melodic or textured sounds. Sonically, the audio split results are clever although not perfect: single layers might not stand up to being exposed in an arrangement, but multiple layers always add up in a complementary way.

While the Expansion Kits are very usable as part of a production process, however, I struggled a bit to fit the loop-playing side of Regroover into my work process. Triggering the layers from MIDI notes gives lots of scope for improvised performance of the loops, but can be fiddly for simple applications. In many cases it would be adequate (and easier) to be able to latch the playback of layers to the DAW’s playback. This, and the fact that Regroover can’t handle tempo changes/maps, meant that I tended to use it less as a real-time instrument and more like an offline tool, bringing the audio back into the DAW to use its own arrangement tools. For this I wished I could quickly drag and drop the layers out into my DAW tracks or Scenes, rather than having to export as files and re-import. These few workflow niggles aside, Regroover has a strong foundation of technology and ideas, and Accusonus are working on a number of enhancements to this genuinely innovative new tool. 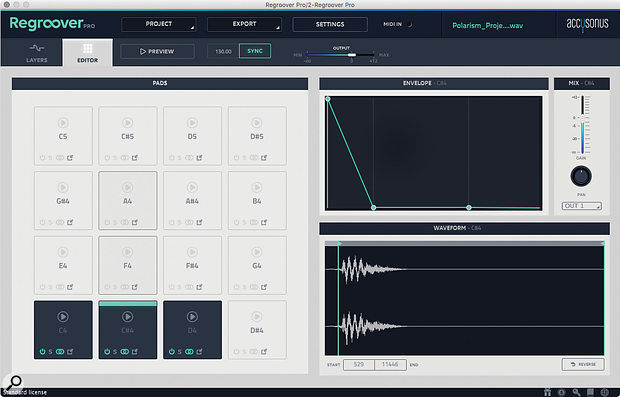 The Kit Editor lets you create drum kits with slices from the layers and other samples.

The Pro version of Regroover includes a 16-pad grid called the Expansion Kit for loading and triggering individual drum samples. You can grab samples directly from the layer tracks, or load any sample from your library. Samples in the grid can be triggered from MIDI alongside (or instead of) the loop layers.

An overview of your Expansion Kit is shown in the corner of the main view, but there’s a dedicated editor page where you can load sounds, and edit each sample’s start/end points and amp envelope. You also get level and pan controls, and the option to route sounds to discrete outputs.