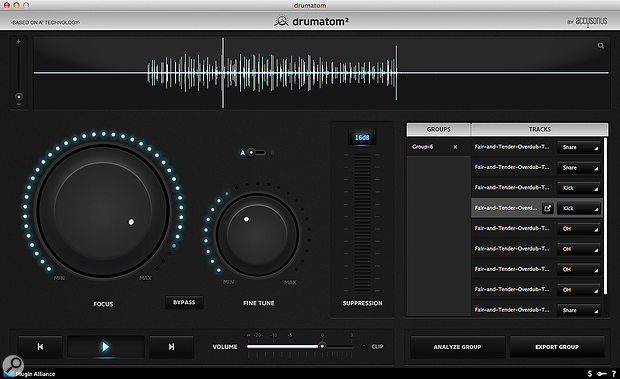 Twenty or 30 years ago, gates and expanders fulfilled a wide variety of roles in the studio, from cleaning up noisy tracks to tightening the timing of sloppy bass parts. In the modern software studio, many of these tasks can now be tackled with dedicated tools that are more effective and easier to set up than conventional gates. However, there are still some roles where old-school dynamics processing hasn’t yet been made obsolete, and one of these is removing or attenuating unwanted spill on the close mics in a drum kit.

Properly set up, a gate or expander plug-in with a side-chain filter can often be quite effective in this role, but there are limits to what’s possible. For one thing, a conventional processor can’t do anything about spill that overlaps the wanted sound; you might be able to get out that splashy hi-hat between snare hits, but when the gate opens to let the snare through, it’s going to let the hi-hat through too. For another, it is often impossible to persuade a gate to distinguish between drums that occupy the same frequency range; you might be able to reduce hi-hat spill on the snare track, but tom spill can be near-impossible to eradicate.

Enter Drumatom from Accusonus, which uses advanced DSP techniques to overcome the limitations of standard gates and expanders. Available for Mac OS and Windows, it is primarily a stand-alone tool, though an element of DAW integration is possible thanks to an additional plug-in called Drumatom Player.

The concept behind Drumatom is no doubt simpler to explain than it was to code! In essence, you give it two or more audio files from a multitrack kit recording, and tell it whether each of them is supposed to represent kick, snare, overhead, toms and so on. Drumatom then analyses the files and decides which elements on the close-mic tracks have a sonic signature belonging to other kit pieces. You can then use a pair of simple rotary controls to adjust the level of these spill elements on each track.

In practice, it couldn’t be much simpler to use. You simply drag files from Windows Explorer or the Mac Finder onto the right-hand side of the Drumatom window. It almost invariably succeeds in identifying them correctly — a feat which impressed me until I realised it was just inspecting the file name for words such as ‘kick’ and ‘snare’! Hitting the Analyze Group button then sends Drumatom away to carry out some serious thinking; if you have a large number of tracks selected, or if they’re very long, this can take a few minutes.

Once the analysis is complete, the leakage suppression controls become active. For reasons best known to Accusonus, there are two of these per track, labelled Focus and Fine Tune. The latter is arguably a misnomer, and certainly confused me at first, because its action is nearly as drastic as that of the main Focus parameter. It turns out that Focus actually adjusts the amount of suppression that is being applied, while Fine Tune is more like a wet/dry mix control that can be used to bleed the unprocessed signal back in. A Bypass button allows you to switch out the processing for A/B comparison purposes; I’d have liked a way to audition the difference signal too, so as to hear only what is being ‘thrown away’, but that’s currently not possible.

I didn’t have the Drumatom Player plug-in available for tests, but if you have it, it provides a way of adjusting these parameters within the context of your mix. However, the analysis still needs to be carried out off-line in the stand-alone Drumatom.

Leakage suppression is available only on tracks that are identified as close-miked: overheads, room mics, and anything else identified as ‘other’ can be used as source material for Drumatom’s analysis, but can’t themselves be processed (unless you deliberately misidentify them). In practice, once the analysis is complete, finding the best suppression settings is relatively straightforward, but a large part of getting the best from Drumatom consists in choosing the right files for analysis to start with. Simply dropping in every file from a heavily multi-miked kit recording will rarely deliver the best results, and will make the analysis process very slow. It’s often better simply to load in only the files that are related to a specific problem. For example, if the main problem that’s making the drum tracks hard to mix is hi-hat spill onto the snare, you might be best off loading only the snare track and either a hi-hat track or the overheads for reference; room mics and tom mics will likely just confuse things. (I found that it also works quite well if you just load a single track, suggesting that some of the analysis parameters are set globally rather than derived from your reference sources.)

I tried Drumatom out on a variety of multi-miked drum kit projects, and found that as is so often the case, it tends to give the best results with the best recordings. Where spill isn’t too troublesome in the first place, you can often reduce it significantly with minimal side-effects; and even on a well-recorded kit, this can make the difference that allows you to push the snare to the right level in the mix, apply that epic tom reverb cleanly, or compress the snot out of the kick drum without bringing the spill up too far. Up to a point, the same would often be possible with a conventional gate, but Drumatom goes further. It really can attenuate spill that coincides with the wanted sound; and it really can discriminate spill sources that are in the same frequency range as the wanted sound. One of my test tracks, for instance, was a snare mic that had picked up large amounts of spill from the rack tom. No gate setting I tried was capable of attenuating the spill without also cutting out quieter snare hits, but Drumatom did this very effectively.

Confronted with more problematic recordings, I found Drumatom to be a bit more hit-and-miss. In one case, for example, kick drum spill onto the snare track was almost as loud as the wanted signal, and here I couldn’t achieve any useful attenuation at all, even when I analysed only the kick and snare mics. Compared with a conventional gate, Drumatom also has a much more obvious effect on the frequency content of the wanted sound. Even in modest amounts, it introduces an audible dullness into the top end, and although it can attenuate cymbal spill in a way that no gate can, it can also make the spill that remains sound phasey and unpleasant. Settings towards the top half of the control range tend to be pretty much useless in their own right, though I can well imagine employing Drumatom very aggressively in order to generate a reliable source for triggering samples.

As someone who works fairly often with live recordings, I was hoping that Drumatom might also be able to help with the wider spill problems that arise in those contexts, such as drum spill onto instrument mics, or amp spill onto the drum mics. Unfortunately, in its current incarnation, that doesn’t seem to be the case. It’s only possible to process other sources, or even overheads, if you deliberately misidentify them as drum close mics — and when you try, the most usual result is that nothing happens. Even where there’s significant spill from, say, a guitar amp onto a snare mic, I found that Drumatom wasn’t awfully keen to do anything about it.

All in all, though, I think that Drumatom is an innovative product that does represent a genuine advance over existing technology. Provided you don’t expect miracles from it, it can make a significant difference to the ‘mixability’ of most multi-miked drum recordings, and although you need to be conservative with the Focus control for anything that’s actually going to feature in your mix, its more extreme settings might help provide clean trigger tracks in situations where nothing else can. At the price, it’s relatively costly for such a specialised piece of software, especially if you also opt to buy the Drumatom Player plug-in, but there may well be times when it saves your bacon and nothing else can!

Drumatom is an original and sophisticated piece of software that brings new thinking to the old challenge of cutting out drum spill, and is often capable of producing results where existing processors fall short.