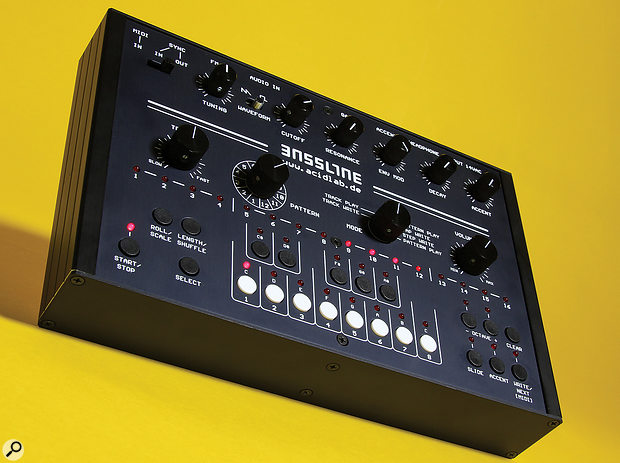 We don our smiley t‑shirts and our baggiest trousers and put Acidlab's 303 clone to the test.

If we accept that Fender Stratocaster copies are still being legitimately manufactured and that it will soon be possible to buy an ARP Odyssey from Korg, it shouldn't seem so strange that Roland's legendary bass synthesizer, the TB303, continues to be issued by all and sundry. Acidlab's current catalogue owes much to the Japanese giant's genre‑defining years and is stocked with new versions of the TB303, TR808 and TR606. The Bassline we're checking out today is the third revision in the series, with upgraded voice circuitry and a sequencer similar to that of Acidlab's 808‑a‑like Miami drum machine (look out for a review of the Miami in a forthcoming issue.). Looks like it's acid time again...

The Bassline 3 — which I'll refer to simply as Bassline from now on — arrived from Germany with a manual I couldn't read and a 14V AC euro‑wart I'd no spare adapters for. After a quick plunder of half‑forgotten four‑ways, it was power‑up time and an introduction to what has to be the easiest TB303 sequencer experience since (and including) the real thing.

The black metal Bassline feels rugged enough to survive a life in or out of the studio and its weighty knobs are a huge improvement on the silver plastic jobbies of yore. The tuning knob even features a centre detent, making it easy to get back in tune after indulging in the old TB303 trick where you pretend it's a pitch‑bender. The many round plastic buttons respond adequately as long as you hit them firmly and, again, they're going to be an improvement on most of the buttons on surviving TB303s. In a further sensible step forwards, the front‑panel‑based waveform selector sits neatly between the tuning control and the filter cutoff. Naturally the single VCO offers sawtooth or square waves.

From the word go, a row of 16 red LEDs shows progress, while others are equally informative, flashing their meaning according to the current mode. Sitting back for a few moments, my hands on familiar controls, I was soon won over by the Bassline's 24dB filter laced with that instantly recognisable acidic chirp. It wows and squelches with little encouragement, while at high resonance and with plenty of accent, bites like a pit bull chewing through a door. All the knob combinations handled as expected and turned up nothing but classic TB303, whether you chose the odd, hollow square wave or the full and lusty sawtooth.

In common with the Miami drum machine, the Bassline offers a three‑way switch and a choice of MIDI input, or DIN sync (Sync24) in or out. DIN is therefore the only means to synchronise Acidlab's ideal partners. The tempo knob (marked slow and fast) covers a range of approximately 40 to 315 bpm. When working to precise bpms, there's no better way than taking the slave option, having first chosen a clock source with a tempo display.

The rear panel has two quarter‑inch jack sockets, one for the main output, the other a pre‑filter input. Unlike a TB303, when you connect an audio source it disconnects the VCO, replacing it with your external signal. External processing comes with the usual proviso that you must provide a trigger, either from the sequencer or MIDI. The remaining jacks are 3.5mm and provide a CV input to the filter cutoff frequency and CV/Gate outputs, plus an Accent output and a mini headphone jack.

The Bassline's sequencer is a doddle to learn, its Mode knob consistent with that of the Miami drum machine, right down to the inclusion of two instances of 'Pattern Play'. Having the same option repeated makes perfect sense when you realise the focus is on real‑time interaction at speed. Set the mode to Pattern Play, select a pattern, then one Mode click is always enough to reach the edit method you prefer — Tap or Step Write.

The Bassline 3's rear panel features an on/off switch, an input for the external 14V AC power supply, a quarter‑inch audio output, 3.5mm jacks for headphones, accent, CV and Gate, a quarter‑inch audio input, a 3.5mm FM input and MIDI.Tap Write is the real‑time recording mode, in which notes banged in on the tiny one-octave keyboard are captured and quantised to the nearest step. As you progress, you're free to enter slides and accents, plus octave transpositions. If you aren't dexterous enough, you can always add (or remove) them on the next pass. A note can be transposed up or down by one or two octaves, but it's sometimes hard to reliably achieve the maximum transposition by this method unless your fingers are lightning fast with the double‑press action, or you slow down the tempo.

I quickly parked any scepticism about real‑time entry because it's so enjoyable from the word go. Many of the best TB303 patterns feature an element of randomness anyway, and I found entering notes freely was an ideal way to start filling the 96 empty patterns of a brand new Bassline. When you make a mistake, first make sure it isn't an improvement on the original idea. Then, if it isn't, hold down 'Clear' for a full cycle to erase the entire pattern. It's also possible to cut specific notes, if you're accurate enough.

In contrast, Step Write is a more leisurely and relaxed affair but remains just as elegantly real time. The current step is shown by a flashing LED on the row above the keyboard, while the note value is represented by a lit LED above the relevant note button. Acidlab have even found it practical to show the current pattern number, by using a flashing LED. Modifiers such as slide and accent, for example, are equally obvious and if all the red flashes appear chaotic at first, they soon settle into your subconscious and become 'right'.

Pressing the Write/Next button advances through the pattern, while holding Select in combination with Write/Next takes you backwards. As ever, Clear is on hand to replace any note with a gap. Step entry is the most precise tool for modifying existing material and equally well suited to programming bass patterns from scratch. As you advance, transposition is represented as a constant LED for a one-octave shift. A flashing octave LED means the transposition is two octaves. The final sweetener is that you can go directly to any specific step for editing, again with a simple button combination.

A pattern's length can be smoothly altered in flight, but since there are only eight step keys, the Length button must be pressed either once or twice. Useful clues to whether the pattern can be up to eight steps or between nine and 16 are temporarily provided by the progress LEDs.

The Bassline has the same 'Scales' (time signatures) and the same two varieties of shuffle as the Acidlab Miami. Its last trick isn't found in the Miami's repertoire though. Roll is a highly useful device for shunting bass lines to the left. In effect, it rewrites the pattern's start point one step at a time during playback. For example, in a 16-step pattern, one press of Roll copies step two into step one, with every other note moving to maintain the same relative position. However, had you shortened the pattern before pressing Roll, only the currently active notes would have been moved. The discarded notes aren't forgotten; if you subsequently restore the original length, the pattern is scrambled (or 'creatively rearranged').

Many TB303 clones include some kind of random pattern generator and while Roll isn't as mad or freaky as some, it's a simple tool that will occasionally turn the lame into the quirky. If you're ever worried about losing a promising pattern, copy it before you start Rolling. If it goes horribly wrong a few operations in, a quick paste will restore it. Patterns can be pasted to new locations too, which is ideal when building a bank of variations.

There are 12 pattern groups, each with eight patterns, selected using the white keys of the keyboard. In Play mode, patterns can be temporarily chained, plus there's a Track Write mode similar to that of the TB303 (and Miami). Placing the eight patterns in each group in a specific order is the closest the Bassline comes to a song structure. Up to 64 steps can be programmed with the added bonus that you can transpose the pattern on every step by up to an octave.

The sequencer's notes are transmitted to any 1V/Oct synth via euro‑friendly 3.5mm outputs. The trigger is a healthy 12V, which was plenty poky enough to drive my Roland SH101. A second 12V output is sent for each step where accent is active. 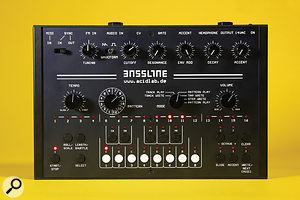 The Bassline 3's front panel is now conveniently home to the waveform switch and anyone who's ever programmed an original 303 will be delighted to see the 16-step LEDs — no more endless counting to work out which step you're editing!There's only a single input — the 3.5mm FM input to the filter — but it's ideal for interfacing with euro modulars (and my old Digisound). Connect an external voltage source such as an LFO, envelope or a VCO to add free‑wheeling wibbles beyond the scope of an unmodified TB303. Equally, you could sequence the filter cutoff using voltages from another step sequencer. I piped in one of the CV outputs from my MFB Tanzbär drum machine, its sequencer breathing squidgy life into bass lines I'd already compiled.

Finally, it's well worth giving the audio input a shot for processing your favourite sources, eg. any drum machine close to hand. The sequencer behaves in exactly the same way with a replacement audio source in terms of accent and slides; these affect the filter and VCA as usual.

I've seen my fair share of TB303 clones over the years, but it's still a pleasure when a really good one drops by. For many the quest to nail the exact combination of raw sound and sequencer can only end in a genuine TB303, but as Roland aren't into the reissues game, their silver boxes of plastic are a dwindling resource at best. The Bassline therefore represents a viable replacement. It handles well and its sequencer is better in most respects than its illustrious predecessor. Although it's a sequencer that closely resembles the Acidlab Miami's, context is everything. Here, thanks to a few valuable extras such as Roll, it's exactly what a TB303 needs.

Should you want them, there are authentic CV and Gate outputs, plus that audio input and the filter CV input. Despite not having a genuine TB303 around on this occasion for comparisons, I was well satisfied with the rip‑roaring filter and its wet, resonant bass. Judged by the number of patterns I've already made, the Acidlab Bassline would be my clone of choice. Like the classic machine itself, it's surprisingly difficult to make it sound naff.

Take your pick. Roland's digital version, the TB3, is affordable and sounds fab. It lacks the directness and traditional interface of a 303 but offers many other sounds and even effects in partial compensation. Of the rest, there are plenty of X0Xboxes in circulation with a variety of operating systems to choose from. None disappoint sonically but you may prefer the consistency and approachability of the Bassline.

As an alternative to the internal sequencer, the Bassline can be triggered from an external MIDI sequencer, keyboard and so on. To do so you must power off then on again, holding down the MIDI button. Four LEDs on the panel remain lit as a visual reminder you're in this mode, in case the sequencer being disabled is too subtle.

A MIDI learn function stores the channel plucked from incoming notes and any with a velocity over 100 trigger the accent function. Slide is engaged for legato‑played notes, as is the case on almost all other 303 clones.

A black metal box of 303 delights with a fat acid sound, an immediately approachable sequencer and bags of character.