DAW For Windows By Paul Sellars 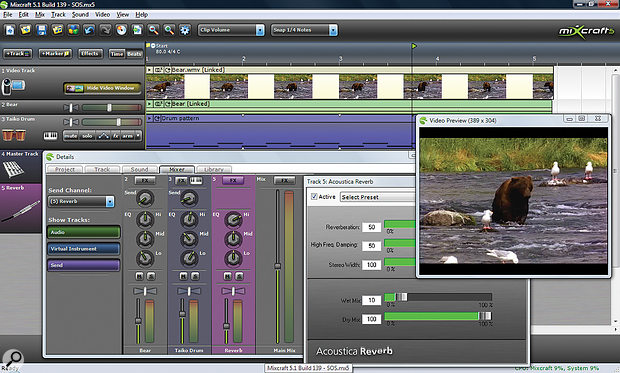 Acoustica's affordable DAW has acquired some significant new features, including video support, score editing and a fully fledged mixer. But has it retained its trademark ease of use?

It's a couple of years since Acoustica's Mixcraft last made an appearance in these pages, and development has continued steadily during that period. The developer's change log contains an extensive list of bug‑fixes (some large, most small) since version 4.1, the last to be reviewed in SOS, and records the introduction of some significant new features, too.

New features are, generally speaking, to be welcomed — but for an application whose greatest strengths are, arguably, ease of use and affordability, there's a danger that a lengthening feature list might alienate the very audience it hopes to attract, especially if it's accompanied by a swelling price tag. So, as the program reaches version 5.0, does Mixcraft still live up to Acoustica's motto that "Software should be easy to use”?

As with previous versions, Mixcraft is available to download from www.acoustica.com, and runs as a feature‑limited demo unless a registration code is purchased. Registration costs $74.95, which at the time of writing is just slightly under £50 — approximately the same as version 4.1 would have cost a buyer in the UK on its initial release. This may be thanks in part to the vagaries of the exchange rate, but even so, it represents a pretty good deal. Boxed versions are also available, for slightly more. (I'd personally recommend the download version, as the pace of development is such that it's likely the first thing you'll be prompted to do after installing from disc is connect to the Internet and download the latest update.)

Mixcraft is available for PCs running Windows only. As is the way of these things, the minimum system requirements have crept steadily upwards with each new release. At present, a 1GHz CPU and 2GB of RAM are the least you'll need, in a machine running Windows XP, Vista or 7. Support for Windows 98, ME, NT and 2000 has, quite understandably, been dropped.

The current version of Mixcraft, unsurprisingly, retains all the features that characterised the previous versions. Briefly, it provides multitrack audio and MIDI recording and sequencing, with integrated tools for working easily with sampled audio loops in different keys and at different tempos. Conceptually, it's a close cousin to programs like Apple's GarageBand and Sony's Acid, and it employs a similar multi‑pane, single‑window user interface. Audio and MIDI tracks run horizontally along the top part, while the lower portion is given over to a pane in which different tabs can be selected to inspect various details of the work in progress. For instance, when a part is selected on an audio track, its waveform and associated parameters are displayed in the Sound tab.

A new feature in Mixcraft 5 is that the pane containing the details tabs can be 'undocked' from the main application window, moved around, and treated as a separate window. This might not seem immediately useful to laptop users, but could be a significant boon on desktop systems with dual monitors.

One of the biggest new features in Mixcraft is a fully fledged mixer, complete with a bussing architecture that permits the use of auxiliary effects.

A number of other user‑interface refinements have been made, to improve usability and bring Mixcraft more into line with the conventional DAW feature set. Among these is a new Mixer view, which displays the customary graphical representation of a mixing desk in a new tab within the now‑undockable details pane. Audio and instrument tracks are represented by channel strips in the mixer, each channel strip providing a volume fader, a pan control, and a useful three‑band EQ. Channels can be muted and soloed, and effects and instrument dialogues can be easily accessed for each channel.

A small but useful refinement is the option to select multiple clips in an arrangement, across multiple tracks, and link them, by right‑clicking and selecting the Link option from the contextual menu that appears. A linked group of clips can be treated as a single entity, which can be moved around by dragging and so on — useful, for example, for rearranging verse and chorus sections. Each linked clip displays an 'unlink' button, which can be used to remove it from the group.

Mixcraft's automation features have also undergone a significant overhaul. Whereas in earlier versions automation envelopes were superimposed directly on top of audio and instrument tracks, they have now been shifted to a collapsible 'lane' beneath the main track display. And while previously only certain 'built in' parameters such as volume and pan were automatable, now just about anything can be automated, including all instrument and effect plug‑in parameters, and mixer send levels (more on these in a moment). Automation envelopes remain quick and easy to edit — click to create a new node, drag up and down to change a node's value, right‑click to set a numerical value for a node or delete it — and the new option to hide the automation data makes for a slightly less cluttered‑looking overview of arrangements.

As hinted above, a new track type makes its debut in Mixcraft 5, to go with the new mixer: send tracks are a handy implementation of auxiliary buses. A send track appears alongside the other tracks in an arrangement and behaves much like an audio track, except that it takes as its input the combined output of one or more other tracks. Multiple send tracks can be created, each of which can have multiple effects inserted. Variable amounts of a track's output can be routed to a send track, pre‑ or post‑fader, and the send level can be automated the same way as with other track parameters.

Mixcraft 5 allows MIDI data to be viewed and edited as musical notation.

Instrument tracks containing MIDI data can now be viewed and edited as musical score notation. By default, when a MIDI clip on an instrument track is selected, its contents are displayed in a conventional piano‑roll editor in the Sound tab of the details pane. Clicking a button now allows you to toggle between this and the new score editor. The score display is large, clear and easy to read, with the note durations from the piano‑roll editor faintly visible in the background (an aid for people, like me, whose sight‑reading is not up to much).

New notes can be be added and edited in the score using the mouse, and the active score can be printed. It's not the world's most sophisticated score editor, but it's fast and responsive, and should allow you to print off a quick score for a visiting session musician when you want to replace one of your programmed MIDI parts with a live take.

Perhaps the most significant new feature in Mixcraft 5 is its support for video. Video files, in AVI and WMV formats, can be imported into an arrangement (other formats may also be available, dependent upon what other codecs are installed on your computer), where they appear on video tracks. Once a video has been imported, small, regularly spaced thumbnails appear at intervals along the video track, serving as a rough visual guide, while a pop‑up window (which can be hidden) presents proper real‑time playback. The video's soundtrack, meanwhile, is automatically added to a normal audio track immediately below, and linked to, the associated video track.

In my tests, CPU use seemed rather on the high side when playing back video alongside multiple audio tracks, suggesting that my laptop is probably a little underpowered for the job. Basic video editing is possible: video clips can be moved, resized and split in the same way as audio clips. Adjusting the start or end point of the clip crops the video. If two video clips are overlapped, Mixcraft automatically crossfades between them. Projects can be exported in AVI or WMV video formats, with adjustable dimensions and frame rates. Mixcraft's video support is basic but functional, and makes working with video as straightforward as working with audio.

Despite the many tweaks and adjustments (not all of which are described above), Mixcraft 5 is fundamentally and recognisably the same program — and that, by and large, is a good thing. The application's user interface wasn't broken and, various small refinements notwithstanding, Acoustica have wisely chosen not to fix it.

The addition of several new track types means that, with more complex arrangements, things can begin to get a bit crowded in the upper half of the Mixcraft window (especially on smaller laptop displays, even with the track height set to Small). Undocking the details pane (and possibly minimising it) is a good workaround, especially if you have the luxury of a second monitor to spread out on.

Overall, Acoustica have done a good job of extending Mixcraft's functionality without sacrificing its ease of use. It's an ever more comprehensive package, for a low price, and the generous selection of third‑party plug‑ins included (see 'Third‑party Coverage' box) expands the toolkit still further.

To complement Mixcraft's built‑in features and extend its capabilities, Acoustica have bundled a variety of third‑party plug‑ins. Some of these are available for free elsewhere on the Web, while others are full‑blown commercial offerings that would cost good money if purchased separately. 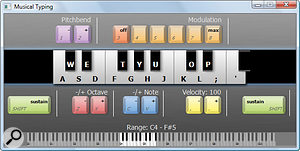 Shred, by AcmeBarGig (available in a freeware version from www.acmebargig.com) is an impressively versatile guitar-amp simulator, offering very 'real'‑sounding emulations of several vintage amp heads, with switchable cabinet simulations and adjustable cabinet and mic settings, and a number of built‑in effects. A good selection of presets is included, and near‑endless tweaking is possible.

The Pultronic EQ plug‑in by developers G‑Sonique (www.g‑sonique.com) is usually a commercial product, but is included for free with the Mixcraft package, where it aims to provide an authentic recreation of a vintage valve equaliser. It's certainly a detailed emulation, even allowing different valve types to be selected at different positions in the circuitry. I can't comment on its accuracy, but it's certainly a pleasant‑sounding EQ, capable of convincingly 'analogue' warmth and grit. (G‑Sonique are also responsible for the Alien 303 bass synth, which does pretty much what you'd expect, and quite well.) 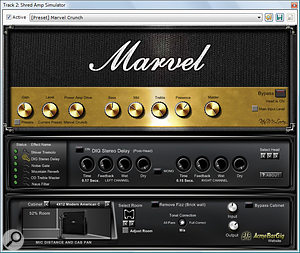 Messiah, by Gunnar Ekoranas, is an impressive emulation of the Sequential Circuits Prophet 5 analogue polysynth. It's a complex and very programmable synth, with plenty of presets provided, and it generally sounds very good.

Similarly impressive is AAS's Lounge Lizard Session (www.applied‑acoustics.com), a cut‑down but still very usable version of the highly regarded physical modelling electric piano instrument of the same name, reviewed in SOS back in March 2006 (/sos/mar06/articles/loungelizard.htm). The Session version is not as programmable as the full version, but it offers four different piano sounds, and some excellent built‑in effects, and it really does sound very 'real'. Bought directly from AAS, Lounge Lizard Session would cost more than Mixcraft itself, so its inclusion here is a significant bonus. 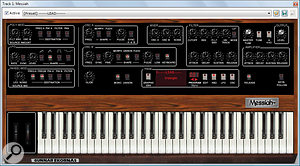 The Musical Typing Keyboard is a neat on‑screen accessory that allows MIDI notes to be triggered from your computer's QWERTY keyboard. This is by no means a new idea, but Mixcraft's implementation is a good one. You can easily select different ranges of notes to be mapped across your keyboard, and simple key combinations can be used to send pitch‑bend, modulation, sustain and even velocity data. It's very handy for outlining simple ideas, for example, when on the move with a laptop.

Happily, despite many small improvements and some significant new additions, Mixcraft continues to be both good value for money and, as promised, easy to use.