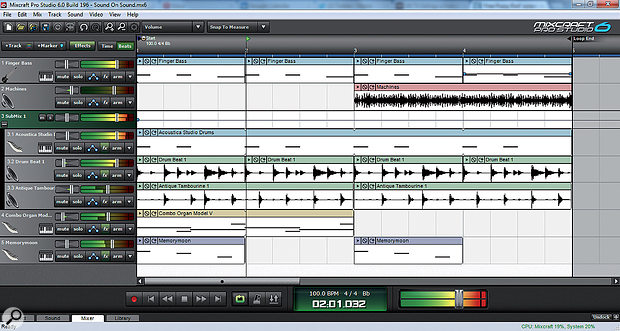 The key features of Acoustica's Mixcraft have always been affordability and ease of use. Version 6 builds on these strengths but also adds a new Pro Studio edition.

Acoustica's Mixcraft has made several previous appearances in SOS, most recently in September 2010 (/sos/sep10/articles/mixcraft-5.htm), when version 5 came under scrutiny. Now version 6 has arrived, on offer both as a standard package and as part of a larger Pro Studio bundle.

To recap, Mixcraft is an audio and MIDI sequencing application capable of hosting third-party effects and instrument plug-ins, a number of which are included. It provides built-in tools for manipulating the pitch and tempo of sampled loops, similar to those pioneered by Sony's Acid and included in Abelton's Live and Apple's GarageBand, among others. A large sound library is also included. The aim is to provide a user-friendly, self-contained virtual studio equipped for all but the most elaborate production tasks.

Mixcraft is available for Windows only (XP, Vista and 7), with a 1GHz CPU and 2GB RAM as minimum hardware requirements. The standard version of Mixcraft 6 costs an inflation-busting $74.95 (about £47) when bought as a download, just as version 5 did before it, while a boxed edition is available for 10 dollars more. If you're already a registered Mixcraft 5 user, you can upgrade for just $20. The Pro Studio bundle is pricier at $149.95 (for a download) and comes with a selection of extra effects not included in the standard package. Given what it could cost to buy a comparable bundle of third-party plug-ins yourself, the price difference is not outrageous.

Acoustica have made a virtue of Mixcraft's ease of handling and apparent simplicity, trading under the admirable slogan "Software Should be Easy to Use!” But after several rounds of maintenance releases and whole new version number, is it still easy to use?

The boxed Pro Studio package, reviewed here, contains a single installation DVD and a leaflet with some tips for setting up your audio hardware; the full manual is on the DVD in PDF format, and there's an online version available at the Acoustica web site. After you've installed it from the disc, there's a good chance you'll be informed that you're running an outdated version and prompted to download the most recent update. Lest this make the installation disc seem rather pointless, bear in mind that it also contains the complete and rather extensive loop and sample library, which would otherwise need downloading too.

I've mentioned GarageBand and Acid already, and Mixcraft is built around a similar single-window, two-pane layout, which remains essentially unchanged in version 6. Audio and MIDI tracks occupy the main pane at the top, while the pane below is split across several tabs where smaller details can be viewed and edited. When a part is selected on an audio track, for example, its waveform and associated parameters are automatically displayed in the Sound tab below. MIDI tracks work similarly, although with a piano-roll or score editor in place of the waveform view. The mixer can also be accessed in this way and, in fact, almost every kind of adjustment can be made in the lower pane, quickly and easily, without losing sight of the larger arrangement above.

Although the layout is fundamentally unchanged, version 6 sees the program's graphics refreshed for a slightly more upmarket look, and beneath the surface it becomes apparent that small improvements have been made throughout the application. For instance, Mixcraft is now a Rewire host: MIDI sequence data can be used to trigger instruments in connected Rewire applications — which are treated just like any other instrument, with the resulting audio being channelled back into Mixcraft's mixer. Similarly, Mixcraft now supports unlimited audio outputs for VST Instruments (individual outputs can be added or deleted as required).

A large sound library was already included, and in version 6 this has been expanded to over 6000 loops and sound effects, many arranged as 'Song Kits' in a variety of styles. The quality of these is generally good, and there are lots of useful and usable building blocks to choose from. The Library tab also now includes an improved Search feature, which works well, and an Import function for adding new loops to the library.

Audio tracks now include a convenient built-in guitar tuner. A single click brings up the tuner interface, which temporarily replaces the level meter for that track. The name of the nearest note (for instance, 'A' or 'G') is displayed, with a 'cursor' indicating how sharp or flat the incoming pitch is relative to it.

Punch-in/punch-out recording is another new addition. Simply click the Punch In/Out button, then click and drag in the timeline to create a 'punch area' dictating where recorded takes should begin and end. Looped recording is also now possible, with each pass automatically stored as a separate clip. Tracks now provide multiple lanes, so that more than one clip can play simultaneously without them having to be stacked on top of one another; lanes are automatically created whenever a new take overlaps an existing one.

Two simple utility functions have been added to the context menu when right-clicking an audio clip: Reverse non-destructively reverses the selected clip (automation envelopes are left in their original positions), while the Phase submenu allows you to invert the polarity of the left channel, the right channel, or both channels. It's also now possible to insert or remove time in a project by dragging a selection in the timeline, right-clicking and choosing either Insert Selected Time or Remove Selected Time from the contextual menu; this is much easier than performing a cumbersome cut-and-paste operation in the middle of a complicated arrangement.

Mixcraft 6's mixer now includes SubMix (group) channels, among other improvements., which allow the outputs from a group of other tracks to be routed together via one fader, EQ, effects chain, and so on. Tracks can be added to a SubMix group simply by dragging and dropping within the track list, and the tracks routed to a SubMix track can be shown or hidden with a single click. Output Bus tracks are similar, and can also be used to group tracks, but offer additional flexibility when using audio hardware with multiple outputs. By routing Output Buses to different hardware outputs you can easily create, for example, separate headphone and monitor mixes. Equally, you could use an Output Bus to route signals to an outboard effects processor, using a conventional input to return the processed signals to the mix. 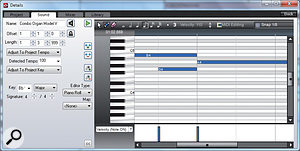 Improvements to the MIDI editor include better quantising and note name display, as shown here.

Mixcraft's MIDI-related features have also been enhanced.The piano-roll editor for MIDI clips has been tweaked so that MIDI note names (A3, B2 and so on) now appear superimposed on the notes themselves. Drum maps can now be created to display the names of individual drums, instead of note names, when triggering drum kit instruments. The notation editor also sees some improvements, including an automated Tidy Notes function to automatically remove score clutter, and the option to toggle visibility for unused clefs (Treble & Bass, Treble and Bass are the options).

It's also now possible to route MIDI track output to effects plug-ins, to control a pitch-correction or vocoder plug-in, for instance. Mixcraft's quantise functions have been developed, too, and now include options to adjust the beginnings and/or ends of notes, and a Swing parameter. A convenient single-click Humanize tool has also been added, to loosen up the phrasing of programmed parts.

Support for MIDI control surfaces has been improved. Buttons on an external controller can now be assigned to Mixcraft's transport controls, just as knobs and faders can be assigned to mixer controls or plug-in parameters. Assignments can be made via a convenient MIDI learn function, and controller maps can be saved and reloaded as required. 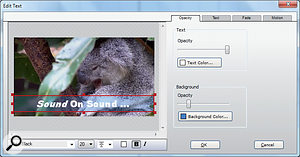 Mixcraft includes simple but very effective video-editing functionality, including the ability to create montages of still images. It's now possible to import still images as well as AVI and WMV files, in order to create montage sequences. A couple of dozen built-in video effects are included (Grayscale, Blur, Sepia and Kaleidoscope, among others), which can be easily automated in much the same way as audio effects. Caption text can be superimposed and made to fade in or out, or scroll. The effects are basic but easy to use, and they can be very effective in moderation.

For all its small improvements, Mixcraft 6 still looks and feels very much like version 5 — and this is a good thing. The application remains easy to learn for newcomers, and should not alienate existing users. That said, one shortcoming that arguably affected version 5 still likewise affects version 6: with so much crammed into the two panes of the main window, Mixcraft can sometimes feel a bit cramped, especially on smaller displays such as on laptops. (By contrast, the program would probably actually work well with a dual-monitor setup, perhaps with one display given over to the Mixer window.)

At just $20, Mixcraft 6 is a must-have upgrade for registered users of version 5, while for newcomers it's an impressively complete and very affordable package that is easy to learn and won't be quickly outgrown. The Pro Studio bundle necessitates a bigger outlay, and while it provides plenty of extras for the money, some users may prefer to buy the basic edition and assemble a different collection of plug-ins for themselves.

A broad selection of bundled plug-ins, created by both Acoustica themselves and selected third-party developers, has long been a selling point for Mixcraft. Version 6 continues the tradition with some interesting new additions to an already extensive collection.

The standard edition of Mixcraft 6 adds several new instruments and effects. The Acoustica Studio Drums instrument provides a set of acoustic drum kit and percussion samples, which are well-recorded and sound very natural. There are two new electric organ instruments, Combo Model V and Combo Model F, which emulate the kinds of electronic organ manufactured by Vox and Farfisa during the '60s and '70s. 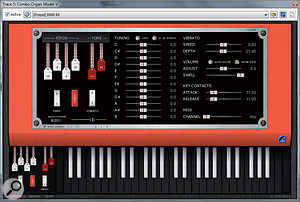 These are nicely done and have plenty of character, although it's perhaps worth noting that both are available as free downloads, independent of Mixcraft, from the original developer's web site at www.martinic.com. New effects include EZQ, an easy-to-use equaliser, and Broadcast Processor, a basic multi-band compressor (both originally hailing from www.toneboosters.com).

The Pro Studio bundle includes all of the above, plus a number of other new effects. Acoustica themselves provide a very flexible 31-band graphic EQ and a nice, smooth-sounding new reverb.

GSXL4070 is a vintage-style parametric EQ licensed from G-Sonique, who are also responsible for the FAT+ analogue overdrive/tape saturation plug-in. ToneBoosters' Ferox does a similar job to FAT+, focusing on tape emulation specifically.

Another nice perk of the Pro Studio bundle is the Mastering Essentials multi-effect from Izotope. 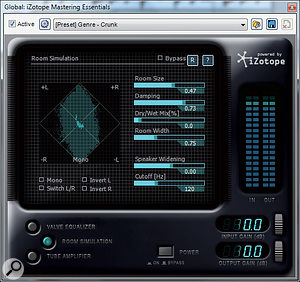 Based on technologies borrowed from their Ozone product, Mastering Essentials combines a Room Simulation reverb, a four-band valve EQ emulation, and a 'tube amplifier module' comprised of compressor, limiter and saturation effects. Designed for use across whole mixes, these effects are designed to add a professional 'sheen' to your finished recordings. Lots of useful presets are included, and it's easy to come up with good-sounding results quickly.

Other plug-ins include an envelope follower, a stereo enhancer, a 'stereophase filter' (for odd, pseudo-panning effects), a noise gate, another parametric EQ, and a bit crusher. Many of these either are or have been available in one form or another elsewhere; still, together they amount to a comprehensive collection from which little could be said to be missing.

Acoustica have made numerous small refinements to Mixcraft without sacrificing its prized ease of use. The standard version, in particular, remains excellent value for money.