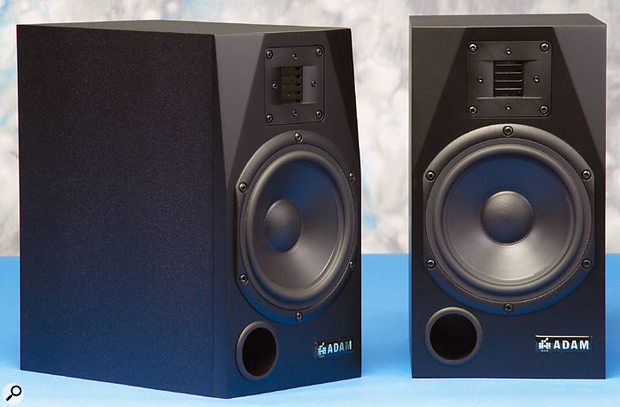 The ADAM range of loudspeakers from Germany may not be the most common form of monitoring found in UK studios, but the company's fine reputation is becoming much better known these days. We have reviewed two ADAM monitors in the pages of SOS — the S2.5A and the slightly larger S3A — but this review is for the smallest and newest model in the range, the ANF10 passive nearfield monitor.

As with all the other monitors in the ADAM range, the ANF10 uses the unique Accelerated Ribbon Technology (ART) tweeter design (see box for details). However, instead of the Hexacone bass drivers used in most of the larger models, the ANF10 employs a more traditional doped-paper bass/mid-range driver, presumably to reduce the overall cost of this compact monitor.

The black-painted cabinet shares the 'house style' chamfered corners either side of the tweeter (to reduce edge diffraction and improve dispersion) and measures a compact 330 x 180 x 280mm (hwd). It weighs just 5kg and the rear panel carries a single pair of gold-plated 4mm binding posts.

The ART tweeter is mounted vertically above a 180mm (seven-inch) doped-paper bass/mid-range driver, with a 45mm circular reflex port venting to the front from the bottom left-hand corner of the baffle. As a result, the ANF10 can be positioned close to rear walls without compromising the LF reinforcement provided by the port, and since the drive units are magnetically shielded the monitors can be used close to computer VDUs without problems either. Although the tweeter looks, superficially at least, identical to those used in other ADAM monitors, it is apparently a completely redesigned version built especially for the ANF10.

The specifications claim an overall frequency response of 50Hz-35kHz (±3dB), and although the actual crossover point is not given I would estimate it to be around 2kHz. (The ART tweeter has a useful range down to about 1.8kHz, and most of the ADAM two-way monitors cross over between 1.8kHz and 2.2kHz.) The speaker is rated to handle 90W on music programme (60W continuous), and although I used my trusty Bryston 4B amplifier (which provides 300W into an 8Ω load) I found the ANF10s were able to deliver substantial levels in a nearfield situation without any hint of strain at all. Like any passive monitor, you only get out what you put in, and the ANF10s are able to resolve a lot of detail, so a decent amplifier is a necessity to really allow these monitors to perform to their best ability.

The Accelerated Ribbon Technology tweeter employed in all ADAM monitors is fundamentally different from the more common soft-dome and metal-dome drivers used by most speaker manufacturers. The design is based on technology developed over thirty years ago called the Air Motion Transformer, which ADAM have refined to produce both tweeter and mid-range units for the company's exclusive use. In essence, the ribbon is placed between the poles of a very strong magnet as in any other ribbon design, but it doesn't operate in a simple pistonic fashion as other drivers do. Instead, the diaphragm is deeply folded, like a concertina, and the current is forced to flow around the ribbon folds in such a way that they move to actually pump the air in and out, rather than just pushing it back and forth.

One of the most significant advantages of the ribbon design is that the diaphragm is also the motor, so there is a much smaller moving mass involved than in any moving-coil-driven design. The direct result is a far better transient response and wider bandwidth, in much the same way that a ribbon microphone has a much better transient response that a moving-coil mic. The ART design is also capable of handling more than double the thermal power of a conventional one-inch-dome tweeter, which means it is completely reliable even in high-powered professional monitors.

Whereas simple pistonic diaphragms move at the same speed as the air they displace, the unique pumping action of the ART design moves the air four times faster than the diaphragm itself. This makes it much more efficient than conventional tweeters and helps to match the mechanical impedance of the diaphragm and air more accurately — producing high output levels (typically 93dB/W/m) and a better transient response.

When mounted in free space, well away from walls, the stereo imaging is huge, with wall-to-wall sound when replaying suitable material. Accurate coincident stereo recordings are portrayed with fine resolution and believable depth cues, and the 'sweet spot' is wide and stable, allowing you to move around the desk without losing the spatial imaging.

The spectral balance is very good for a box of this size, and kick drums and bass guitar lines are delivered with reasonable weight and depth. However, with the monitors on stands well away from the rear and side walls I felt the overall balance tended slightly towards a mid-range and treble emphasis — an impression confirmed when I listened to some spoken voice tracks which sounded vaguely disembodied. Moving the speakers closer to the back wall allowed the room to provide some additional acoustic reinforcement, which I felt helped to redress the balance and fill out the bottom nicely — but without sacrificing any of the impressive imaging qualities. 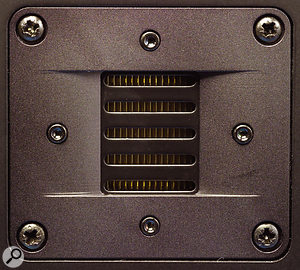 ADAM's proprietary ART tweeter unit.Photo: Mark EwingThe ART tweeter is certainly very fast and crisp, delivering transients with excellent precision and dynamism. Indeed, the whole of the upper mid-range is very accurate and clean, allowing the listener to hear subtle details well inside a complex mix. This is a true monitor in that sense — faults are not glossed over at all. However, the ANF10 is not a fatiguing speaker either, and although you are left in no doubt as to what is going on in a mix I found I was quite happy to continue using the monitors for many hours at a time on a complicated editing project.

As always, I made some test mixes using these monitors and found them a pleasure to work with. Small EQ changes were easy to judge, and although the fundamentals of bass instruments were subdued on these monitors (you can get too used to big PMCs!) replaying the mixes on other systems reassured me that everything came out in the right proportions — kick-drum and bass-guitar lines were balanced as I was expecting.

At this UK price the ANF10 finds itself amongst such worthy competition as the Dynaudio BM5 and Tannoy System 600 monitors. Comparing it directly with my own BM5s, I would say the ADAM monitor had the upper hand when it came to hearing into mixes, and the imaging was more impressive too — although the Dynaudio speaker is no slouch in either respect given the UK asking price.

The ANF10 is intended mainly for nearfield use in modest project and home studios, but would be a good choice for any application where detailed nearfield monitoring is required. Like all good monitors, this speaker is able to reveal the limitations of mediocre power amps, so I would recommend that they be partnered with as good an amplifier as you can afford. Overall, though, the ADAM ANF10 is a very welcome new passive design for the budget end of the quality monitoring market, and one which should certainly be auditioned seriously.