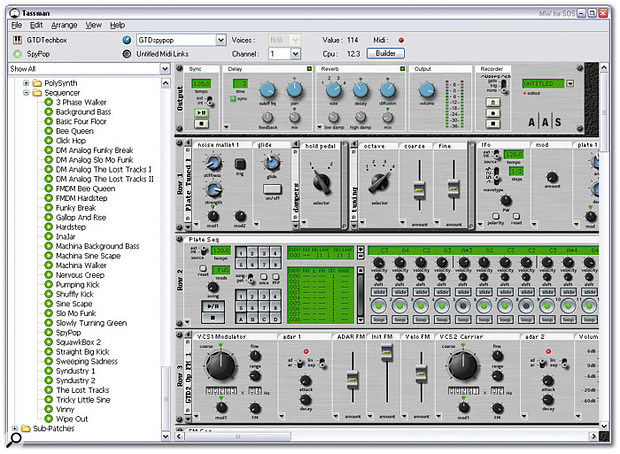 With a large new library of Performances and a new Output section (on the topmost row), Tassman v4.0 is far more capable than ever before.

Tassman is not the oldest 'virtual modular' software synth, but it's always been one of the better ones around. We check out the latest version...

Ever since I reviewed version 1.2 of Applied Acoustic Systems' Tassman modular software synth designer way back in SOS July 2000, I've been fascinated by its blend of physical modelling, analogue synths, and step sequencing. Since then its list of modules has grown considerably, VSTi and DXi support has been added, a Mac version has been developed, and the two-part Builder/Player has been integrated into one much neater interface. However, although it's easier to design with than NI's Reaktor, Tassman has never taken off in quite the same way, despite a loyal following.

So what's new in version 4.0? Well, the two biggest improvements are a new Performance Mode, which combines an instrument, a preset, effects, and MIDI maps, and a new Output Stage. No, these didn't sound particularly exciting to me either, that is until I heard the results. What AAS have done is put a shine on the already capable engine at the heart of Tassman by adding all those final touches that make the sounds of MIDI hardware synths so enticing. To cap it all, they've teamed up with their US distributors Ilio to develop a greatly expanded library.

In Tassman 's Player view, the new Output Stage appears automatically as an extra module at the top of each instrument's rack, but offers far more than its name suggests. From left to right, you get Sync, Delay, Reverb, Output, and Master Recorder sections. You could previously sync modules together internally, but the new output Sync section lets you set overall internal tempo or lock to the tempo of a suitable host application using the new Master Sync Input module.

The Delay section uses the new Sync Ping Pong Delay module, which can also be externally sync'ed if required, and provides feedback, low-pass filter and stereo-panning facilities. As with the similar effect in NI's Pro 53, this is surprisingly versatile considering its low CPU overhead, and is capable of a range of effects from simple stereo thickening to flanging and chorus to multi-tap delays.

The reverb section uses the new stereo Reverberator module that's a huge improvement over the offering in v3. It has four size options from room to large hall, decay, diffusion, low and high damp controls, and I found it more versatile than some plug-in reverbs in simulating short ambiences all the way through to cavernous cathedrals with smooth, non-metallic tails. The Output section provides overall volume level and metering, while the Master Recorder lets you capture the real-time output of Tassman as a WAV or AIFF file. Finally, the settings of all five of these Effects Stages can be saved as presets.

All Instruments automatically use the Output Stage, but its current settings are not saved with them. To do this, you need to use one of the new Performances, which consists of an Instrument design, one of its Presets, a MIDI map containing controller allocations for real-time performance, and a complete set of Output Stage settings. Once you add some carefully chosen effects to an Instrument or Preset it really comes to life, sounding far more polished and 'complete', and of course both the delays and reverb help greatly in disguising abrupt note endings when using low polyphony.

To make the most of this new regime, AAS provide a greatly expanded library with plenty of new analogue Instruments, and loads of the new Performances, which are sorted into 18 folders by genre. The first folder labeled 'Super Models' contains 101 entries, followed by others named 'Ambient', 'Audio Processing', 'Bass', 'Bell Type', 'Bowed', 'Flute Type', 'FX Synth', 'Keys', 'Lead', 'Mallet Type', 'Motion', 'Organ', 'Pad', 'Percussive', 'Plucked', 'Polysynth', and 'Sequencer'. Each one contains at least a dozen performances, and often 50 or more — there must be nearly a thousand in all, and I've highlighted some of my favourites in the box below.

The eagle-eyed among you will already have spotted another feature given away by the 'Audio Processing' performance folder — Tassman v4.0 now includes new Audio In and Stereo In modules, so you can use it as an effects processor as well. AAS include a dynamic pitch-shifter, a dynamic delay, an unusual Tone control, and a vocoder to get you started, but I was soon using its sequencers to create some complex synchronised step-filtering effects.

The VCO module is now more CPU efficient, while the response of the Multi-mode module used by the majority of acoustic algorithms including beams, membranes, plates, and strings has also been improved. In a side-by-side comparison with Tassman v3, version 4 Instruments definitely sound tighter and punchier, with a more defined impact on struck and plucked objects, as well as greater dynamic range and expression.

Some of the version 3 presets have disappeared from some instruments, as have some of the instruments themselves, although you can export these and import them into version 4 using the TXF (Tassman eXchange File) format. If you're upgrading, install both side by side or save the version 3 library folder elsewhere before you uninstall the application, and if you've already used Tassman v3 in some existing songs, you'll ideally need to keep its 53MB installed alongside version 4, or face some tweaking and remixing.

For the first time, the toolbar not only displays the polyphony and MIDI channel assigned to the current Instrument, but also lets you quickly change them via drop-down boxes. The toolbar also provides a new CPU meter to monitor the total processor overhead, and has a handy Builder/Player switch.

The Browser now lets you view various combinations of Performances, Instruments, Modules, Sub-Patches, and Imports, to help you find what you're looking for more quickly. Other useful additions include a MIDI program change map, so you can switch Performances from your keyboard or sequencer. By default, the 101 performance Super Models are mapped to program changes 0 to 100, but you can create your own maps referencing any Performance. You can now also choose the rack row in which each Module appears in the Player from a menu command.

AAS are victims of their own modesty. While adding a new Performance Mode, Output Stage, Expanded Library, Audio Input Processing, and Improved Algorithms sounds interesting if not revolutionary, the truth is rather more exciting.

Tassman v4.0 sounds more sophisticated than its predecessors, from its basic algorithms to the fairy dust of its multi-effects. It's now able to show its versatility as a effects plug-in, too, and it has a library that finally taps its potential to prove to new users what it's capable of. Whether you're searching for delicate acoustic timbres or analogue sounds with attitude, Tassman v4.0 delivers them in spades. As you've probably gathered, I'm impressed!

Tassman v4.0 adds a rich layer of sophistication to its sounds, while its much larger library finally proves just how capable the AAS analogue- and physical-modelling modules really are.