One of the all-time classic microphones gets a 21st-century makeover.

The C414 is probably the best-known microphone that AKG make, alongside the legendary C12. Nevertheless, the C414 has undergone a number of evolutionary changes over its long lifetime, changing shape, adding and discarding transformers, and now, in its latest incarnation, sprouting LEDs! Although the overall shape of the new versions is unmistakably C414, virtually everything about the microphone has been redesigned in an effort to retain the original sound, while at the same time improving the technical performance. AKG cite 15 improved features, though one of these relates to the depth of engraving and the colour of the infill, so clearly some are of more importance than others!

Two Of A Kind 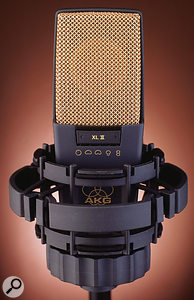 Photo: Mike CameronIn fact there are two new C414s, the C414B XLS and the C414 XLII, though the only performance difference between the two models is that the XLII has a more pronounced presence peak than the XLS. A slight additional lift above 3kHz gives this model a slightly more airy and open top end that is useful when miking vocals to capture a contemporary 'crisp' sound, or when miking instruments at a distance where the high lift helps compensate for the natural HF loss that occurs at a distance. Visually, the XLS model has a silver grille matched by silver engraved legending, while the XLII has a gold mesh and legend. As the mics are so similar, I'll simply refer to them as the C414 until the time comes to describe their tonal differences.

These C414s are large-diaphragm, multi-pattern capacitor microphones utilising a gold-sputtered diaphragm where only the front side of the diaphragm is coated, the aim being to avoid electrical shorting between the diaphragm and backplate at very high SPLs. The capsule hangs in a newly designed four-point suspension, and even the way the various pattern, pad, and filter options are selected is quite unlike anything AKG have done before. Rather than use slide switches, the mics are now fitted with soft-touch rocker switches that are linked to digital switching circuitry, status LEDs, and a non-volatile memory so that settings are retained when the mic is disconnected from the phantom power source.

The pickup pattern can be switched in five steps to encompass omni, wide cardioid (not available on previous C414 models), cardioid, narrow cardioid, and figure of eight. A tiny system of green LEDs below the switch illuminates whichever option has been selected, and the current selection can be temporarily locked by pressing and holding the rocker selector switch for three seconds. Pressing again for three seconds, or switching off the phantom power, unlocks the setting. The same pattern-selection LED doubles as a clip warning light, and turns red for around one third of a second 2dB prior to clipping. At a recent AKG press event, we were also told that the pattern LEDs are recessed, so that if you can see the LED clearly from the position of the instrument or voice being recorded, the mic is being aimed correctly. This seems like a good idea, except in the event of clipping, where it could be argued that only the person or instrument being miked will be able to see the LED turn red! Maybe all the LEDs should flash red when clipping takes place?

The pad switch now has 6dB, 12dB, and 18dB settings — as with the pattern selection, this works by changing the polarising voltage on the capsule. Because very high impedances are involved around the capsule itself, any changes made using these switches will take a few seconds to become active. The familiar bass-cut switch has also had a face-lift with 40Hz, 80Hz, or 160Hz settings, as well as off. A slope of over 12dB/octave is used for the lower two settings, while the 160Hz setting has a more gentle 6dB/octave characteristic. 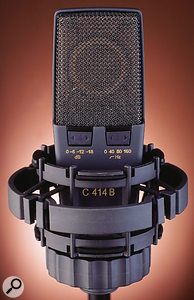 The reverse side of the new mic carries pad and filter switches.Photo: Mike CameronRe-engineered, transformerless electronic circuitry has extended the dynamic range of these microphones to around 134dBA by maximising headroom and minimising self noise, the latter down to an impressive 6dBA. To achieve this, the mic requires a full 48V phantom power source that conforms to the DIN/IEC spec, where the phantom voltage is positive with respect to the cable's ground screen.

During the makeover, the capsule and circuitry have been made less susceptible to humidity and temperature by locating the function switches in the low-impedance section of the circuitry, which also minimises switching thumps. Matching between microphones has been tightened as well, so there's no need to buy matched pairs for stereo work. Interestingly, because the microphone utilises microprocessor-controlled switching, we are told that it will be possible to control the functions remotely via normal mic cables, and AKG are apparently working on a remote control, to be called the R414, for this purpose. However, no further details were available at the time of this review.

Cosmetically, the mics certainly look more modern than their predecessors, and they also come with a more comprehensive range of accessories, specifically a foam-lined aluminium flight case that also includes a high-strength plastic shockmount with bayonet quick-release mechanism, plus a separate mesh pop shield with flexible gooseneck. You also get the old fashioned foam wind sock and a manual in an assortment of popular languages.

Tonally, these mics come very close to the earlier transformerless C414s, though the top end seems a little smoother than I remember it. Even the top-lift XLII model sounds open rather than harsh, and the difference between the two mics is more subtle than I expected it to be. The obvious test for the C414 is a lead vocal, and as expected the mic handled this like the thoroughbred it is, combining body with high-end clarity, and here the choice of two slightly different high-end characteristics means that if one of these mics doesn't quite do the trick for you the other one probably will. I'm not sure whether the HF contouring is a function of the capsule design or the electronics, but if the latter then it might have been preferable from the user's point of view to have just one model available with a switchable high-end lift.

The other test was, of all things, a folk concertina which I miked in stereo, the XLII covering the high end and the XLS the bass notes. I know that a purist stereo recording should use identical mics, but I actually achieved excellent results with great stereo separation and minimal spill from the other instruments playing in the room, and there was no obvious tonal disparity. Acoustic guitar was also a doddle with the XLII, giving an expensive, sparkly sound but not at the expense of depth. Recording the acoustic piano is another favourite for C414s, and as the overall tonality hasn't changed to any significant degree I can see this tradition continuing.

On a practical note, the LEDs, which are fairly discreet, help in setting up under poor lighting conditions, and also avoid the need for clunky slide switches, but I can't help feeling they could be a disadvantage for TV work, where you need the mic to be as inconspicuous as possible. Maybe the forthcoming new remote control could include a LED kill switch?

While the new C414s are not cheap mics, the new design and the use of modern manufacturing methods have allowed AKG to peg the UK price, retain the classic sound, and introduce some very real improvements, both practical and technical. Furthermore, when compared with flagship mics from other companies, the cost of the C414s compares very favourably. Over the few weeks I've had these mics, I haven't found anything they do badly, and I've found lots of things they do well. AKG's new control system is rather neat, as is the promise of remote control, and you can't fault the selection of accessories, which includes a tough flight case, a very well-designed shockmount, and a pop shield. These new mics successfully uphold the classic C414 tradition for sound, while their extended dynamic range, greater sensitivity, and very low background noise make them suitable for the most demanding music recording tasks. I'll be sorry to see them go back.

The new C414s are classics brought up to date. Numerous improvements have been made without sacrificing what made this mic so popular in the first place.